In the short essay “Does America Still Exist?” by Richard Rodriguez, the primary inquiry is found by plainly considering the title. This question is much deeper than what some might consider it to be. In order to even begin to consider this interrogation, Rodriguez must first define “America”. In his opinion, the main cornerstone of this country is the unity and welcomeness in which it was created. After defeating the might British in order to become independent, the solidarity among the victors begot the American core.

Don't use plagiarized sources. Get your custom essay on
“ “Does America Still Exist?” by Richard Rodriguez ”
Get custom paper
NEW! smart matching with writer

“We pledge allegiance to diversity.

America was born Protestant and bred Puritan, and the notion of community we share is derived from a seventeenth-century faith”. (Paragraph 7) America has been immensely diverse throughout its short time in history. This is where Rodriguez is puzzled. If this great nation is diverse and the American citizens have defined themselves as hospitable, then how come there are vast amounts racism and immigration headaches? Has the nation lost its true identity and finally given up on trying to assimilate “foreigners”?

This latter half of this dissertation is very similar to Guillermo Gómez-Peña’s essay “Documented/ Undocumented”.

Gómez-Peña focuses on the different manner immigrants are viewed once they arrive in America and the evolution that an immigrant has in America. Rodriguez expands on this topic as he expresses the ways immigrant children are changed in schools and are “assimilated into gringo society”. (Paragraph 12) This transformation is frowned upon the parents of these children since their offspring do not resemble the children that immigrated into America and they have lost the identity that traces back to their native land.

Rodriguez also mentions how he feels that he became like his classmates(i.e. became Polish, Italian) while his classmates reciprocally assimilated a little into his Hispanic heritage. I can definitely relate to this assumption since in the majority of my classes, classmates inquire about my past and they are engrossed about what I tell them.

When Rodriguez mentions that the famed melting pot of America has become “retired, clanking, into the museum of quaint disgrace, alongside Aunt Jemima and the Katzenjammer Kids” (Paragraph 12), I tend to agree. In my interpretation of melting pot, I see various folks that have different heritages becoming one and having healthy relationships that include discovering about each other pasts and “assimilating” into each other’s culture. In my time here in America, I have seen this occur, but I have also experience the polar opposite. In schools, kids that are Asian only relate to other Asian classmates, same for Hispanics and Blacks. This isn’t healthy for America and this isn’t what America was founded on. Unity and togetherness have always been resilient values of this nation and having those values be deteriorated will cause future problems. How can this fissure be resolved? 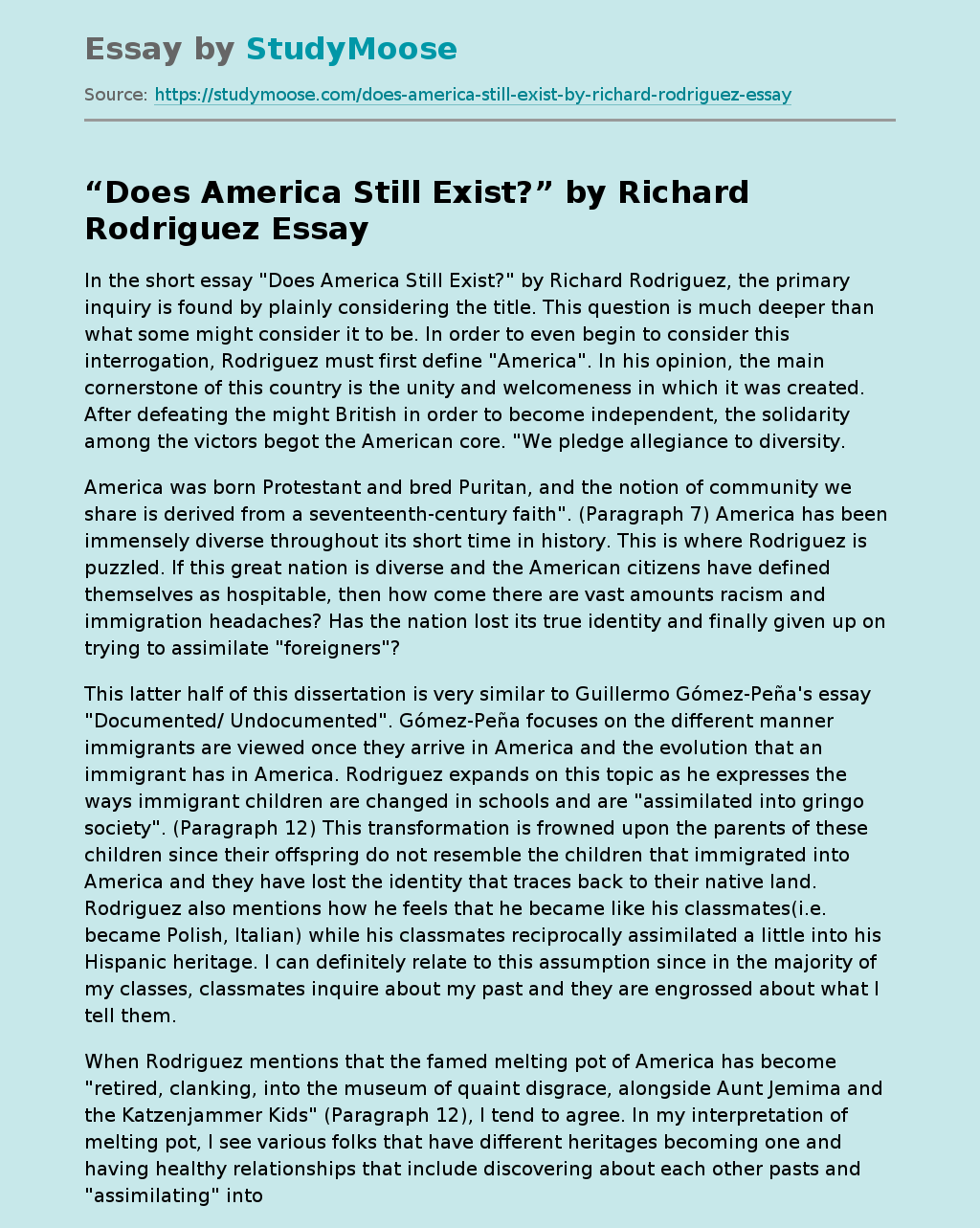