A dramatically casebook is a document which that contains information that can be used by the director, actors and designers in the preparation of a production. This casebook is for a play called Doctor Faustus and the adaptation of the play. Doctor Faustus an Elizabethan tragedy by Christopher Marlowe. It is a story of a well-respected German scholar dissatisfied by the limitations of conventional knowledge of logic, medicine, law and religion. He decide to offer his soul to Lucifer and signs the contract with his own blood in exchange for twenty-four years of servitude from Mephistopheles.

Don't use plagiarized sources. Get your custom essay on
“ Doctor Faustus Analysis ”
Get custom paper
NEW! smart matching with writer

He wanted to gain wisdom, knowledge and learn more about the myth of the universe and to redraw the map of Europe. At the end of the pact, he summoned the scholars who told him to repent but it was too late and when the bell rings, the devils tear his soul from him and he slope to hell. Marlowe, Christopher (1962).

Set 16th century Europe as a dramatization of the medieval morality play in which heaven struggles for the soul of a renaissance Everyman named Doctor Faustus, ( Some scholars believe that Marlowe developed the story from a popular 1592 translation called the English Faust book. Leo Ruickbie (2009). However, whatever the inspiration, the development of Marlowe’s play is very faithful to the Faust book, especially the way it mixes comedy with tragedy.

In addition, Scholars suggest that Admiral’s men first performed the play 24 times in the three years between October 1594 and 1597.

On the early production of the play, the devil once appeared on the stage during a performance of Faustus recorded by William Prynne. The appearance amused the actors and spectators, a sight which driven some spectators mad. 3 john Aubrey recorded a related legend in which Edward Alleyn was a lead actor of the Admiral’s men.

He devoted his years later to charitable endeavors, like founding of Dulwich College in direct response to this incident. The play was also adapted for the screen in 1967 by Richard Burton and Neville Coghill, who based the film on an Oxford University Dramatic Society Production in which Burton starred conflicting Elizabeth Taylor as Helen of Troy. In 2011 Paul Hilton as Faustus and Arthur Darvill as Mephistopheles Performed in London at the Greenwich theater. Lohelin James (2016)

In addition, adaptation is turning an old text into a new one invested with a contemporary language. I adapt the old story of Doctor Faustus selling his soul for wisdom and put it in a contemporary world whereby in the modern change the Protagonist will be selling his soul for lottery numbers. Instead of the Protagonist dying at the end, I will let him live and serve the devil for the rest of his life. The production play is about a 22-year-old young intelligent College boy studying Medicine at Oxford University. He is from a humble and Christian background, with the quest of becoming a multimillionaire at a young age. He timed himself that by 25 he should own a big company which sales latest cars in America. His friend convince him to sell his soul to the devil so that he can win the lottery and live his dreams. He signs the contract with the blood of his mother. As soon as he won the lottery, he drops out of school and start to enjoy the fruits of his contract and the sexual fantasies. Whilst he had everything he needed he then think of his mother and regrets sacrificing her. His relatives and childhood friends encourages him to repent before it is too late but the devil told him that if he repent he will lose everything and become the poorest man in the world. By the fear of being poor, he then decided to save the devil for the rest of his life.

The principle characters costumes will be of the modern world. The Devil will be appearing in a black and red gown.

The adaptation is set in the contemporary 21st century USA. The play will be communicating to everyone and draw the attention of the audiences because it will be showing the bread and butter of the day. The production play will touch every generation because the time we are living in revolves money all around us unlike in the original play wisdom and education was the value of life. America as one of the wealthiest nations in the world has large population that enjoys a standard of life far higher than that of most people on earth. Even the poorest are considered rich by people in other third world countries. Americans are not ashamed of amassing huge quantities of material things. Having everything is the part of the American dream even though the economic success is driven by greed, the desire for power and money.

The Protagonist is considering money more than family to the extent that he sacrifices his mother to the devil. All he think of is making more money and he is on an unyielding course of self-destruction and determined to become a multimillionaire and own a corporate jet no matter what the intangible costs. He is allowing greed to control his life sacrificing his family and himself. Hence, money is the root of all evil mark Dubose (2013).

In addition, there is a clash between Christianity and Satanism as many people are selling their souls for money and many churches are evolving throughout the whole world. There is the concept that making a pact with the devil is a sin before the creator. However, Christians believe that even the most evildoers can be forgiven if they repent. Christ died on the cross for the sins of humankind so that they will have everlasting life. People convince the protagonist to repent but he choose to remain loyal to the devil for the rest of his life, turning away from god condemn him damnation. Henceforth, people are valuing money more than the creator is.

There is also the issue of peer pressure, which is causing many students at schools, and colleges to get into dirty deals like selling drugs, stealing or joining Satanism in order to fit in. as much as some want to study money is now more seductive than knowledge and education.

Apart from that, there is also the fear of being poor. Everyone is thriving to be rich. If everyone become rich, who will became the servant and work for the rich? The protagonist was afraid of being poor like his parent to the extent that he chooses to serve the devil for the rest of his life. It is true that our childhood backgrounds influence our adult lives and the choices we make as we grow.

There is also the myth that if one has money he gets every woman he desires. Just after Faustus sign, the contract he asks for a woman. Robin the Ostler also steal Faustus conjuring book to make the girls dance for him naked. His friend Rafe wanted to have sex with Nan spit their kitchen maid. 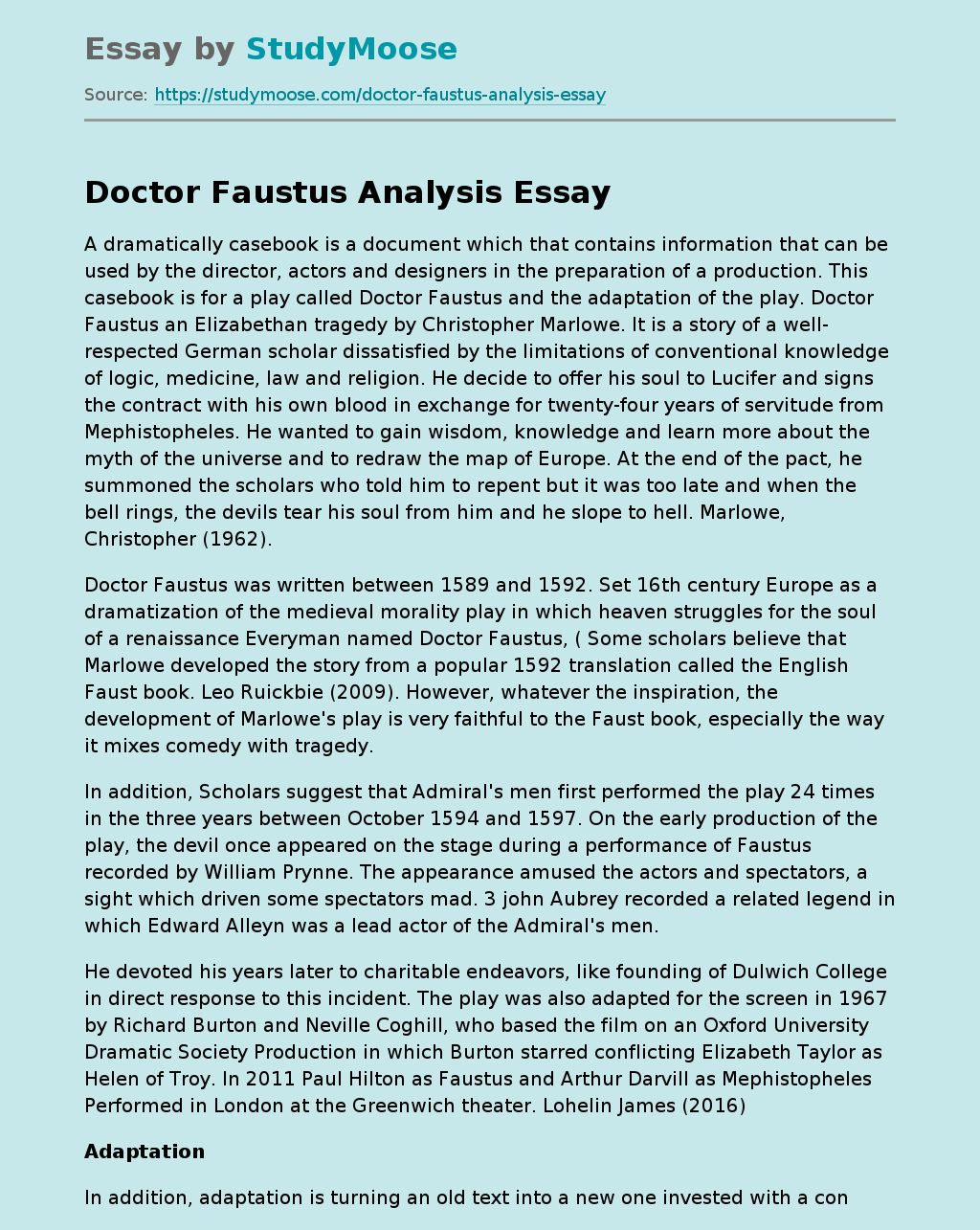