According to the article “Do Video Games Kill?” author, Karen Sternheimer, brings up an interesting and controversial subject about video games. “If we want to understand why young people, particularly middle class or other stable environments, become homicidal, we need to look beyond the games they play.” Sternheimer starts her article by giving an example of the video game “Doom” that became a target for critics. Shooting at the schools in Kentucky, Oregon, and Colorado were most probably caused by video games.

Turn in your highest-quality paper
Get a qualified writer to help you with
“ Do Video Games Kill ”
Get high-quality paper
NEW! AI matching with writers

The author sticks to this explanation because of many influential opinions from politicians, news, and different groups of people. Media is providing information to the public about shooters being the ones who are playing video games.

The politicians, as well as the FBI are claiming that the only logical explanation for people committing irrational decisions and exhibit aggressions is playing violent games. Those video games have represented a variety of social anxieties such as computer technology, the ability of adults to control what young people do and know.

In addition, politicians came up with an idea that everything video games contain are immorality and crime. As mentioned above, politicians are not the only ones, who are blaming video games as a cause of every crime and abnormal behavior of people. After shootings at schools in many places throughout America, political intervention accelerates newspapers and news immediately to respond to those incidents by blaming the use of video games.

Famous newspapers such as New York Times, Pittsburgh Post-Gazette, are making headlines, in which they are accusing “Days of Doom” of the shooting.

Media created fear among people, who tend to connect negative sides of media to major issues. Sternheimer argues that you cannot blame the producers and manufactures of things that had caused harm to others. It is the people who cause the harm not the video games themselves. The author tried to explain to people to look deeper for the cause, other than to just blame video games. Although people have tried to sue the producers and manufactures, they have not won their cases in the courts. 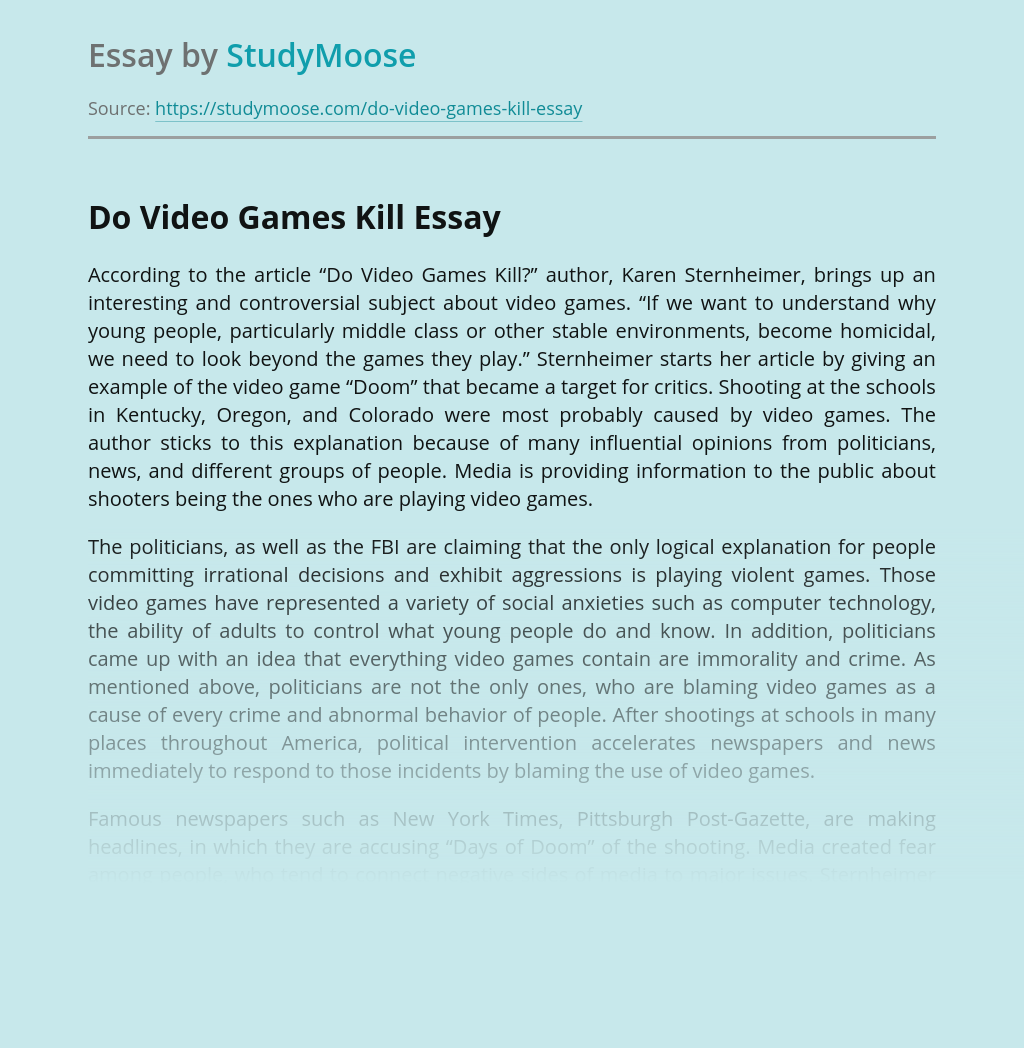 Turn in your highest-quality paper
Get a qualified writer to help you with
“ Do Video Games Kill ”
Get high-quality paper
Helping students since 2015
Stay Safe, Stay Original