Do Not Use Animals Products

Cows have cry for us, they put down their knees, begging to survive, but humans, they killed the cows without any tears and fears. Can you imagine that’s how cold blooded being a human. Animals have more emotion than humans, they will not leave you when you are sick, but how human do is abandon them, animals did not do anything wrong, how can humans do this, animals have longer history than humans. They lived without risk before, but now, everywhere has risk.

Don't use plagiarized sources. Get your custom essay on
“ Do Not Use Animals Products  ”
Get custom paper
NEW! smart matching with writer

We need to protect them, instead of hurting them.

Animals products are not necessarily to humans. Being beautiful doesn’t need to kill animals.

Today, people who are rich or poor also can eat animals products. The human population today is larger than before. Billions of people eating meat, that means billions of tons of water and food are being shifted from the poor people. Billions of pounds of fertilizer are destroying our topsoil, drinking water, and ozone layer.

Eating too much meat can cause many sicknesses, it’s unhealthy and too heavy to our body. In addition, today we not only have the plant-based diet, we also have many diet products, such as tofu, nondairy milk, yogurt, cheese, and ice cream, and many other healthier and delicious products that make a vegan diet easily and delicious. Also it’s environmental friendly to our world.

About the animals testing. It’s cruel to lock uncountable animals to life in a laboratory cage and purposely to cause them pain and fear.

The Food and Drug Administration reports that 92 out of every 100 drugs that pass animal tests fail in humans. Now some scientists have developed humane, modern, and effective non-animal research methods that are cheaper, faster, and more accurate than animal tests. The world doesn’t need another makeup, hand soap, food ingredient, that it should come of animals’ lives. Whether it came from an animal in a fur farm or which was caught in the wild, every fur, trinket will caused an animal suffering and took away their life. Animals on fur farms spend their entire lives confined to narrow, extremely dirty iron cages. Fur farmers use the cheapest and cruelest killing methods, including suffocation, electrocution, gas, and poison.

Almost half of the fur comes from China, where millions animals are killed, and often skinned alive for their fur. Chinese fur is often mislabeled, so if you wear any fur, there’s no way of knowing for sure what skin you are wearing. There is no need to be cruel of staying warm and look cool. Cruelty-free fabrics and faux furs are available in stores everywhere. Animals need their fur coats more than we do. But on fur factory farms around the world, billions of animals spend their lives in dirty cages, only to be killed by immoral methods, just because the name of fashion. Millions of pets and non-target wildlife, even the endangered animals which could die in fur traps. However, there are many designers who refuse to work with animal fur, and some famous brands also refused to animals testing.

Many countries refused to import ivories, rhinoceros horns, government should protect them more early. Many elephants and rhinos died because of their intrinsic features. Human don’t need those things , it’s useless for us, the horns and ivories are belonging to the animals, but human want to earn more money, so they killed the innocent animals without any mercy. Although the animals are almost being extinct, people still doing stupid, unreasonable things to hurt the lives of earth. Another example, is the shark fins, no matter how delicious it is, people can not killed them just because of the fins, the most irritated thing is the dumbest people after taking off the fins then threw back the sharks in the sea and let it died painfully and slowly. How can people doing that?

God gives the rights to us , is to protect the animals and the environment, not killing them just for fun or earn money, money is not the most important things, Do human want to regret after all animals have been extinct? Some people will never regret because they are the most selfish species in the earth. Please do not visit the circus which have animals performances, people would be cruel to train the animals. Also the zoos which use cages to lock the animals for showing them to human, animals need freedom, not cages. But except the National park and the zoos which help the abandon animals and the illness animals.

But nowadays the new generation of human realize that focus on environmental friendly is important, the pollutions which are seriously bad to affect the earth. Refuse using animals products can help our earth becomes healthier, also people can live in a healthier way, human and animals can live together peacefully.

Do Not Use Animals Products . (2021, Apr 01). Retrieved from https://studymoose.com/do-not-use-animals-products-essay 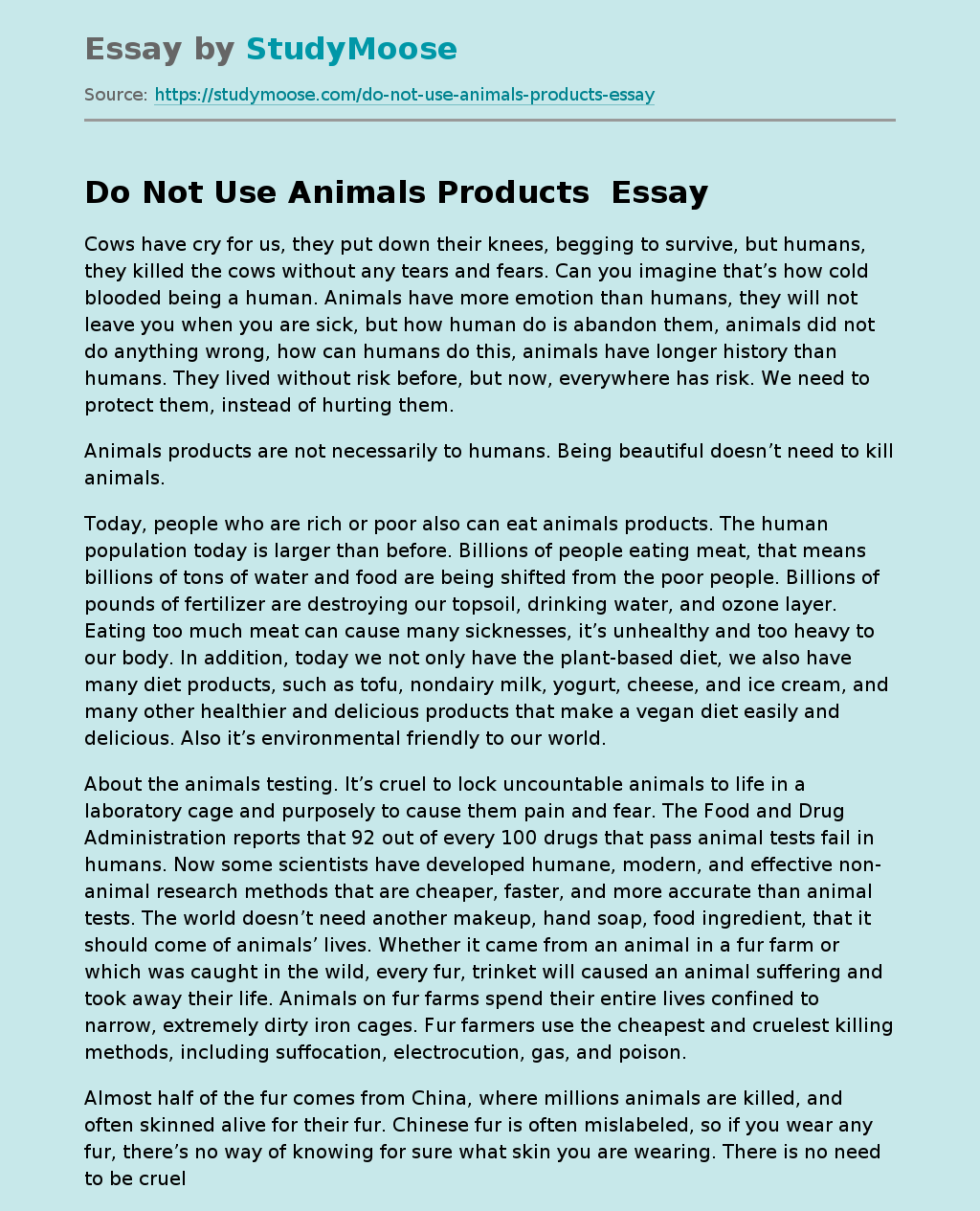