Do Major Cities Reflect the Most Important Characteristics of a Society

My opinion is that when analyzing the most important characteristics of a society, it is true that one must study its major cities; however focusing only in major cities would generate a biased result. They concentrate an important part of the population of a country and they can represent well the main characteristics of the urban life of a particular society, however they fail in reflecting the rural world, ethnic minorities and local languages.

Major cities reflect the characteristics of the best-educated segments of the population, the ones with higher incomes and better job opportunities, on the other hand, small towns and rural communities may have totally different characteristics and probably will have lower quality education, lower income and worse jobs in terms of remuneration.

Don't use plagiarized sources.
Get Your Custom Essay on Do Major Cities Reflect the Most Important Characteristics of a Society Just from $13,9/Page

One example is China, if one were to look at major cities like Shanghai, Hong Kong and Beijing and only focusing on those cities, the conclusions would be wrong. One would conclude that China is very industrialized, that its society organizes in crowded, modern and congested cities.

The truth about China is that there are two realities, the urban China represented in major cities and the rural one, depicted in its small communities, both with contrasting characteristics.

In short, looking at the major cities is extremely important to assess an important group of the society, however we should always keep in mind that a society is composed by different groups and realities and in order to understand it correctly we must look into a representative set of communities whether they are big or small.

Do Major Cities Reflect the Most Important Characteristics of a Society. (2016, Sep 30). Retrieved from https://studymoose.com/do-major-cities-reflect-the-most-important-characteristics-of-a-society-essay 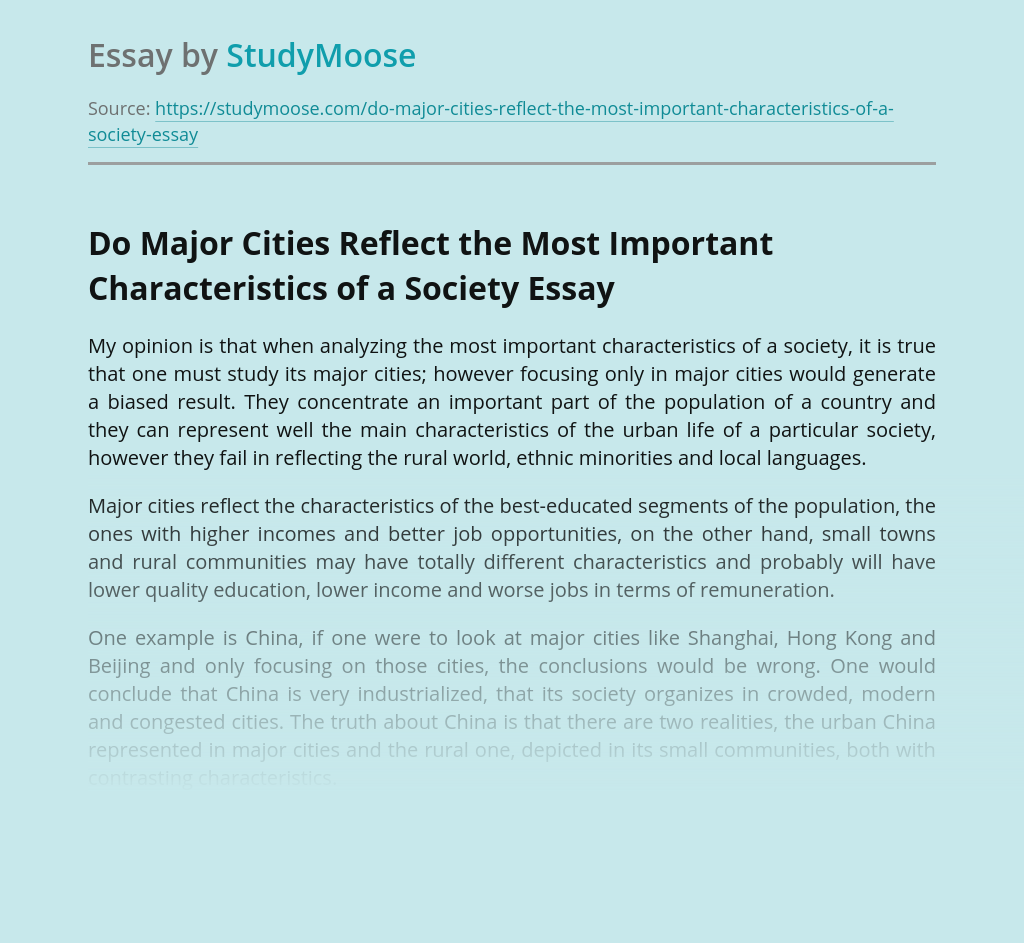 Being able to recognize our own strengths and weaknesses can help us become better individuals in anything we choose to do, whether it is our positive abilities and skills that can help achieve our goals or negative personal areas that need improvement. Knowing yourself and what you can do, can help you recognize and overcome...

“Belonging is not simply about the well-being of an individual. Belonging allows humans to overcome great obstacles and moments of adversity”. Every human being possesses the urgent need to belong, to gain the strength of others and to fit into society. It is in our basic nature, our history supporting the human will to belong,...

Sometimes people conform even when they are aware that it is not the right thing to do. This essay will explore the reasons and factors that influence conformity. Research into conformity became very important at the end of the World War Two, as many people hypothesised that Germans were born evil. It has since been...