Do Guns Make Us Safer?

For some time now the question of whether or not handguns should be legal to all citizens has haunted our society. Is it morally right for anyone to carry a gun and shoot it when they feel it to be necessary? Doesn’t the second amendment still hold true today? These question are ones that have been thrown back and forth between pro and anti gun users for some time and will probably continue for some time longer. There are people who say handguns in the home can only cause unneeded accidents.

Turn in your highest-quality paper
Get a qualified writer to help you with
“ Do Guns Make Us Safer? ”
Get high-quality paper
NEW! AI matching with writer

There have been several incidents where a child in the household has mistaken a gun for a toy and has injured themself or others. Also there have been occasions where careless gun owners have left their guns loaded and someone was shoot accidentally. Studies show that four people die each day because of accidental gun fire. Anti-gun users have pointed out the fact that states who have relaxed their gun laws have had an increase in homicides.

Also the fact that more people have died from criminal use of guns than people in the civil war. Some feel it is extremely easy for just about anyone to get access to a handgun. The laws in some states don’t require a waiting period , several forms of identification, or even a back round check. Anti-gun users feel that if handguns are illegal it may not be impossible for criminals to obtain them but it would be much more difficult. If that were true some believe there will be a drastic decrease in gang violence and armed robbery.

The ultimate argument pro-gun users have is the second amendment which states an individuals right to keep and bear arms. They feel it is there right to be able to own a gun to protect themselves from those who want to cause harm. If guns were outlawed and criminals were still finding a way to access a gun the common citizen would be helpless against them.

Pro-gunners are aware of the many accidental deaths caused by the misuse of guns, however the fact remains that a numerous amount of people are killed each day by careless drivers. They are aware that accidental deaths can be caused by a variety of different things, so should they give up there right to own a gun to protect them if the need arises. Individuals that support the second amendment stand by the fact that it is better to have a gun and not need it then to need a gun and not have it. The question of whether or not guns should be legal is quite a difficult one to make. There may be a way to find an agreeable middle point. Perhaps the laws pertaining to acquiring a handgun could be changed to be more strict on who they give permits to carry a gun to.

Getting a permit could require a full background check and several forms of identification. A waiting period of one to three weeks can be required and inforced. This could cut down on the fact that in some states anyone can walk into a gun shop and give a fake name and walk out with a gun that day. Another way to compromise would be to completely limit guns to shooting ranges and hunting grounds. That way those who feel the compulsion to use guns can be restrained to a location where less accidents can occur. It is possible to lessen the number of accidental deaths caused by guns without banning them completely.

Didn’t you find what you were looking for? More examples of argumentative essays. 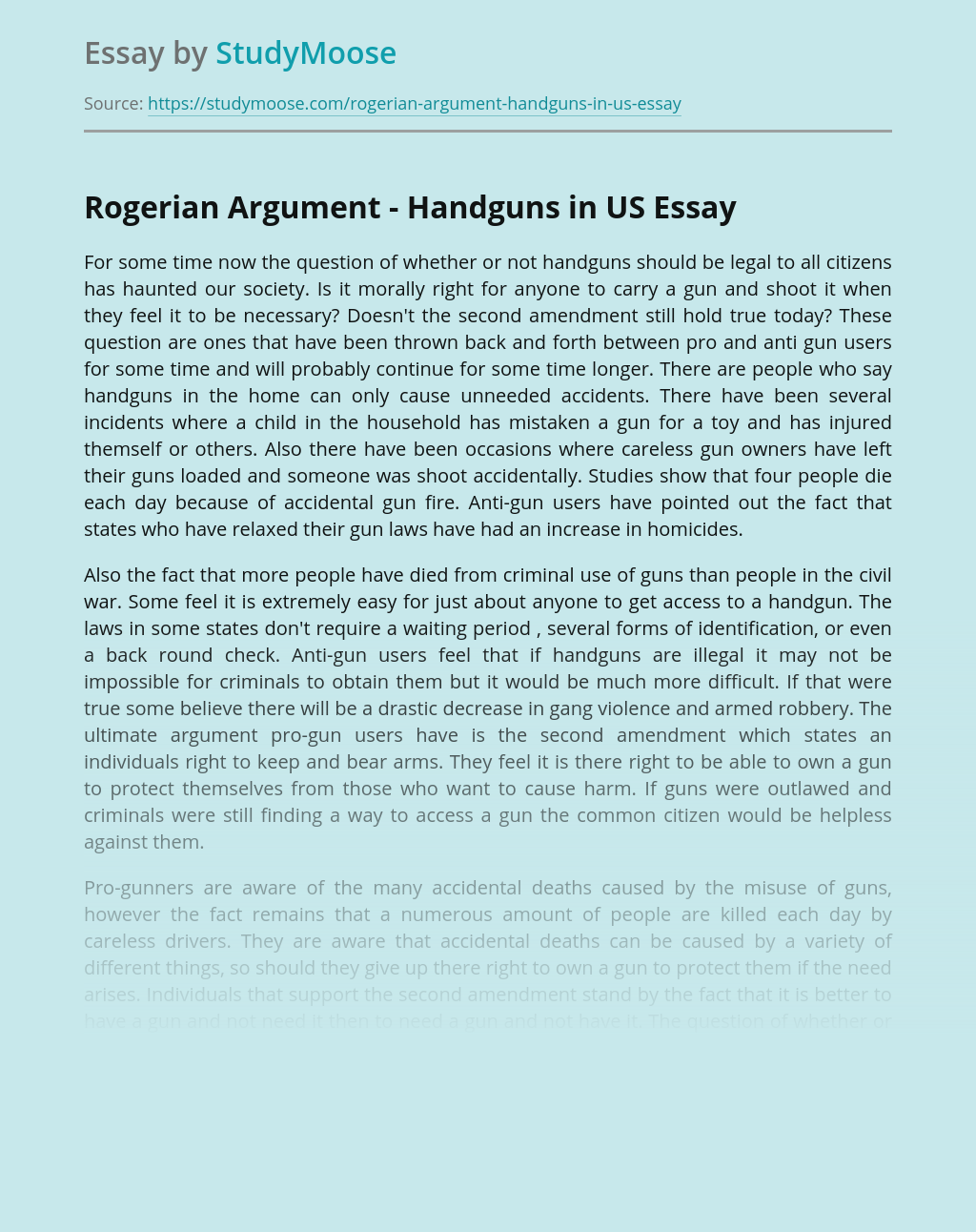 Turn in your highest-quality paper
Get a qualified writer to help you with
“ Do Guns Make Us Safer? ”
Get high-quality paper
Helping students since 2015
Stay Safe, Stay Original