Recombinant DNA Technology has been used to create different types of medicines for example human insulin. People with diabetes do not produce enough insulin for their own bodies, and in a lot of cases, they are allergic to non-human insulin. Due to the creation of Recombinant DNA Technology, scientists are able to produce such insulin in laboratories. The process for creating this insulin starts with isolating the gene from the human cells. Then after it has been isolated, it is then inserted into plasmids.

Don't use plagiarized sources.
Get Your Custom Essay on DNA Science Technology Just from $13,9/Page

From there the plasmids are introduced into bacterial cells. These cells manufacture the insulin protein based on the human code. The final, purified product is identical to human insulin and non-allergenic. In some cases though, yeast is used in recombinant DNA technology in creating human insulin instead of using bacteria. Since Yeast performs more complicated cellular processes that occur in human cells, it is more useful in producing human substances.

This technology is also used in producing genetically modified foods.

Genes can be produced from plants or other organisms in order to give them certain characteristics such as, giving produce a longer shelf life, increasing the flavor of the foods and even the nutritional content, and creating edible vaccines in order to prevent widespread diseases in other developing countries. The technology of making genetically modified foods and creating human insulin are very similar, with one additional step.

After the bacteria multiply the selected gene, scientists introduce it into plant cells. This is done so that the plant will produce the gene product; no matter if it is an insecticide, vaccine, or other plant material. Until writing about this, I was unaware of the role that Recombinant DNA technology actually plays into our daily life and the effects it takes on our health and well-being, as well as the produce that we buy in the stores and eat on a daily basis.

Now that I have done this I am more aware of how much Recombinant DNA technology helps us as far as making insulin for diabetics so that they can hopefully live longer lives, and making our foods not only healthier but even tastier. In conclusion, Recombinant DNA technology has made a huge difference in our society today, and I believe that we are much better off in many with it. This technology not only saves diabetics lives, but keeps our whole nation/world as a whole much healthier than we’ve ever been. 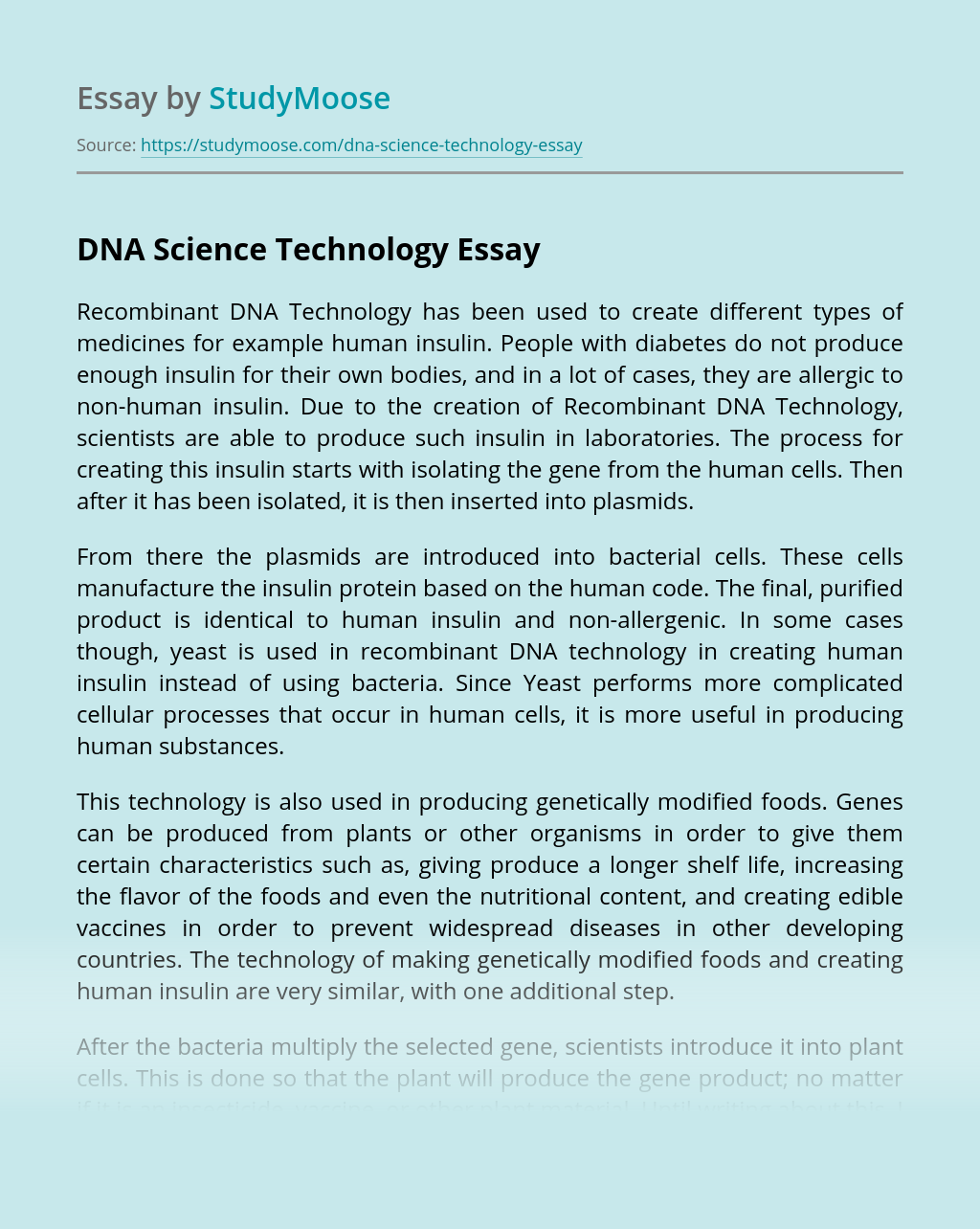 Being a true disciple of Jesus

This paper will try to check out the atypical behavior of Miss Havisham, perhaps the most remarkable character in Charles Dicken’s novel, “Terrific Expectations”. The analysis will be performed in the context of the society she belonged to and the events she had actually been through. INSANITY DURING THE VICTORIAN ERA Throughout the eighteen hundreds,... VIEW ESSAY

1. Explain the benefits that CEMEX and the other global competitors in cement have derived from globalization – how can cross-border activities add value in an industry as apparently localized as cement? CEMEX had just exported cement to the United States in low prices than Mexico. After time goes by, The United States’ producers had... VIEW ESSAY