In a futuristic, dystopian Chicago, society is organized into five factions. Each faction places value solely on a specific virtue, which its members work to cultivate throughout their lives. There is Abnegation, which values selflessness, Amity, which values peace, Erudite, which values knowledge, Candor, which values honesty, and Dauntless, which values bravery. Children are raised in their parents’ faction, and once they turn sixteen, they have the option to choose for themselves which faction will be theirs for the rest of their lives, whether it’s the one they grew up in or not.

Don't use plagiarized sources. Get your custom essay on
“ Divirgent’s World ”
Get custom paper
NEW! smart matching with writer

Beatrice Prior is a sixteen-year-old member of Abnegation. She and her brother Caleb, who is not quite a year her elder, take the aptitude test that will tell them which faction they are most suitable for. The test consists of a simulation of a confrontation with a vicious dog. Beatrice shows aptitude for three different factions, Abnegation, Erudite, and Dauntless, and this means she is something called Divergent.

She is warned to never tell anyone of her results – it is dangerous to be Divergent. After much contemplation over whether to stay in Abnegation or switch factions, Beatrice chooses to switch to Dauntless, and Caleb moves to Erudite.

In Dauntless, Beatrice changes her name to Tris because she feels it will allow her to start over and become someone else entirely. She makes quick friends with two Candor transfers named Christina and Al, and an Erudite transfer named Will, while three other Candor transfers, Peter, Drew, and Molly, become her enemies.

Initiation into this courageous faction involves three stages, and they will be ranked after each one. Only the top ten initiates will become Dauntless members; the rest will fail out and become factionless, forced to live on the streets of the city in poverty. The first stage of initiation involves learning how to fight from their mysterious initiation instructor, Four, and one of the cruel Dauntless leaders, Eric. Because Tris is small, she isn’t a particularly adept fighter, but she manages to get by. 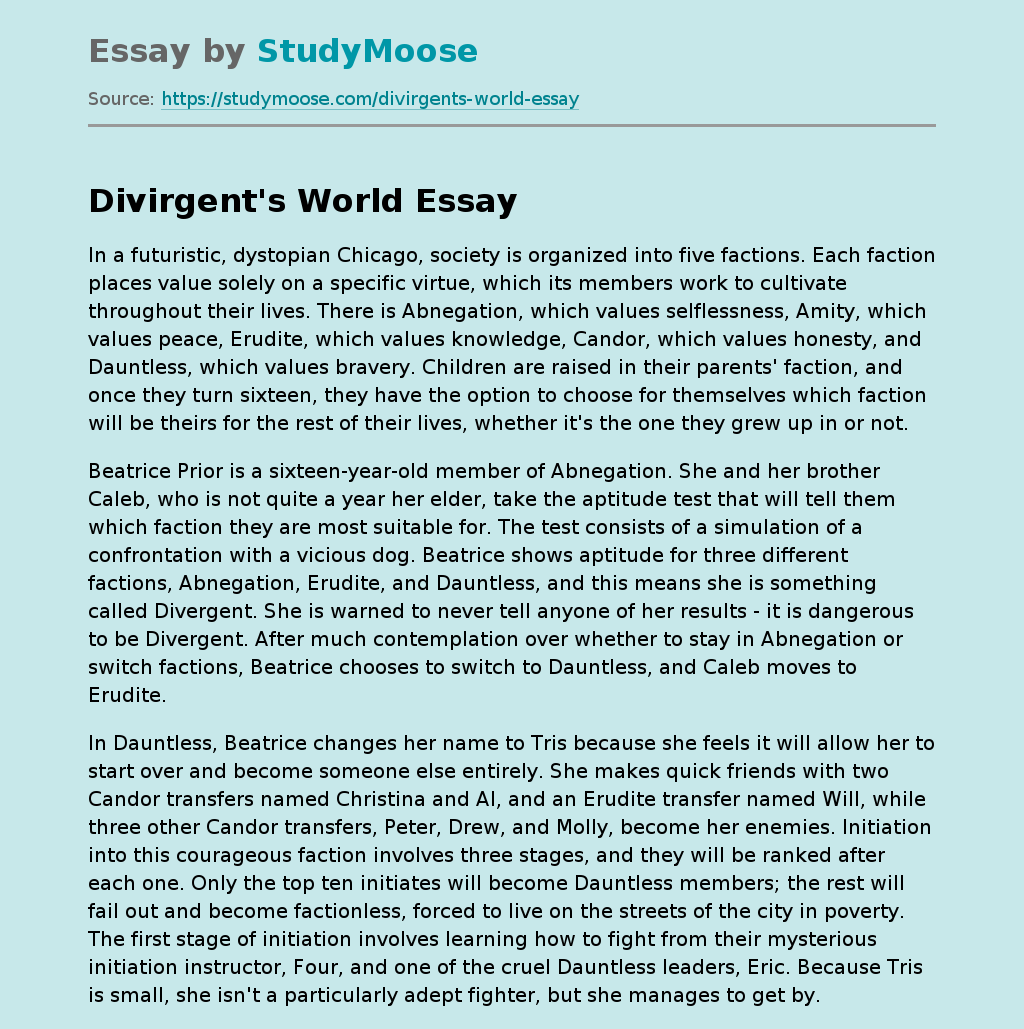