Select one common divine role that recurs in world mythology.

Identify the role in the title of your matrix.

Select two myths, each from a different culture, in which the divine role appears.

Don't use plagiarized sources. Get your custom essay on
“ Divine Roles Across Cultures Matrix ”
Get custom paper
NEW! smart matching with writer

Identify the divinity names and cultures in columns A and B.

Complete the matrix by answering each of the five questions for both selected divinities.

1. How is this divinity portrayed? Describe the divinity’s role within the myth.

She was portrayed to be the goddess of love and beauty often shown smiling. She is the daughter of Zeus.

Some myths also say they daughter of Uranus (Aphrodite, 2002). One of the more known and told myth is her helping Paris to abduct his love Helen of Troy. She was the goddess of love, lust, fertility and magic. According to Freyja (1996), she is believed to be the daughter of the sea god Njord and the earth-goddess Nerthus. She had a twin brother named Frey. Some believe that she was married to Od and once he passed away she never married again and used her powers to have sex with gods, mortals, dwarfs, giants and dwarfs.

Others say that she is the same person as Frigg who is wife to Odin (Freyja, 1996).

2. Is the divinity male or female? What function does this gender play?

Aphrodite is female. Her gender function would be the sexual aspect of the myth surrounding her because she is known for seduction. Freyja was a female who was the goddess of lust and love.

Aphrodite is one of the twelve great Olympians. Aphrodite was able to make all the gods and mortals fall in love or be overcome with desire, except Athena, Artemis, and Hestia (Aphrodite, 2002). She is known to have had many affairs against her mortal spouse with other gods and mortals. Aphrodite was equally quarrelsome and manipulative to both genders of divinities. If anyone wronged her she would make them fall in love with whomever or whatever she pleased. Freyja is one of the most respected of the goddesses. She is very well respected by the female gender of goddesses. She is the goddess of fertility and it was said that if a female wanted children they just needed to call on her and just being in her presence would become with child. The male gender is most lustful after Freyja. She was able to manipulate any male sexually.

4. What are the divinity’s attributes, such as divine powers or characteristics? What objects does the divinity possess, such as a weapon or animal, that assist him or her?

She was able to make anyone fall in love. She could seduce anyone she wanted. She was able to encourage sexual desire, the care of women in child birth, magic, and she helped half the mortal heroes killed in battle to Valhalla. She was known to ride a board or be in a chariot pulled by cats.

5. Identify one character from contemporary culture that shares characteristics of each divinity and explain why you chose each character. What real-life ideals does this divine role represent? How attainable are these ideals? For Aphrodite I think of the vampire characters from the television show and book series of True Blood. They are able to compel people to do whatever they want by either being lustful or on humans by hypnotizing them to do what they want. I think it shows that even in the beginning sex was still the key to being able to manipulate to get what you want.

I don’t completely agree with these ideas. I think depending on who you are these ideals can be easily attainable. For Freyja I am going to use True Blood again but with the character of Sookie Stackhouse. She was lusted after from most males that came around her and she was magical because of being a fairy. Again, depending on the type of person you are some of the ideals are great. I know for women who have difficulty becoming pregnant would love to have her divine power of fertility. Scientifically there are ways to help women become pregnant but still not everyone is able to bear a child.

Summary: Write a 150- to 350-word short essay addressing the following: Why do so many cultures have divinities in similar roles?

I feel that as a human the thirst for knowledge is why many cultures have divinities with similar roles. I think that a lot of these mythological divinities were created as a way to explain why things are the way that they are. There as to be a reason why things are this way and before modern science finding the exact reasons were next to impossible.

There are also people out there that believe the reason that all of these divinities are so similar is because they gods are actually aliens from other planets visiting our world. I don’t know whether any of the stories told have any semblance of truth, but it does make you think of the possibilities. In many religions they believe that there is only one god that created everything. There is no right or wrong answer at this point because I believe that until we find a way to travel back in time we can’t know exactly why these mythical divinities are so similar.

Aphrodite. (2002). In Who’s who in classical mythology, Routledge. Retrieved
from http://search.credoreference.com.ezproxy.apollolibrary.com/content/entry/routwwcm/aphrodite/0

Freyja. (1996). In Bloomsbury dictionary of myth. Retrieved from http://search.credoreference.com.ezproxy.apollolibrary.com/content/entry/bloommyth/freyja/0 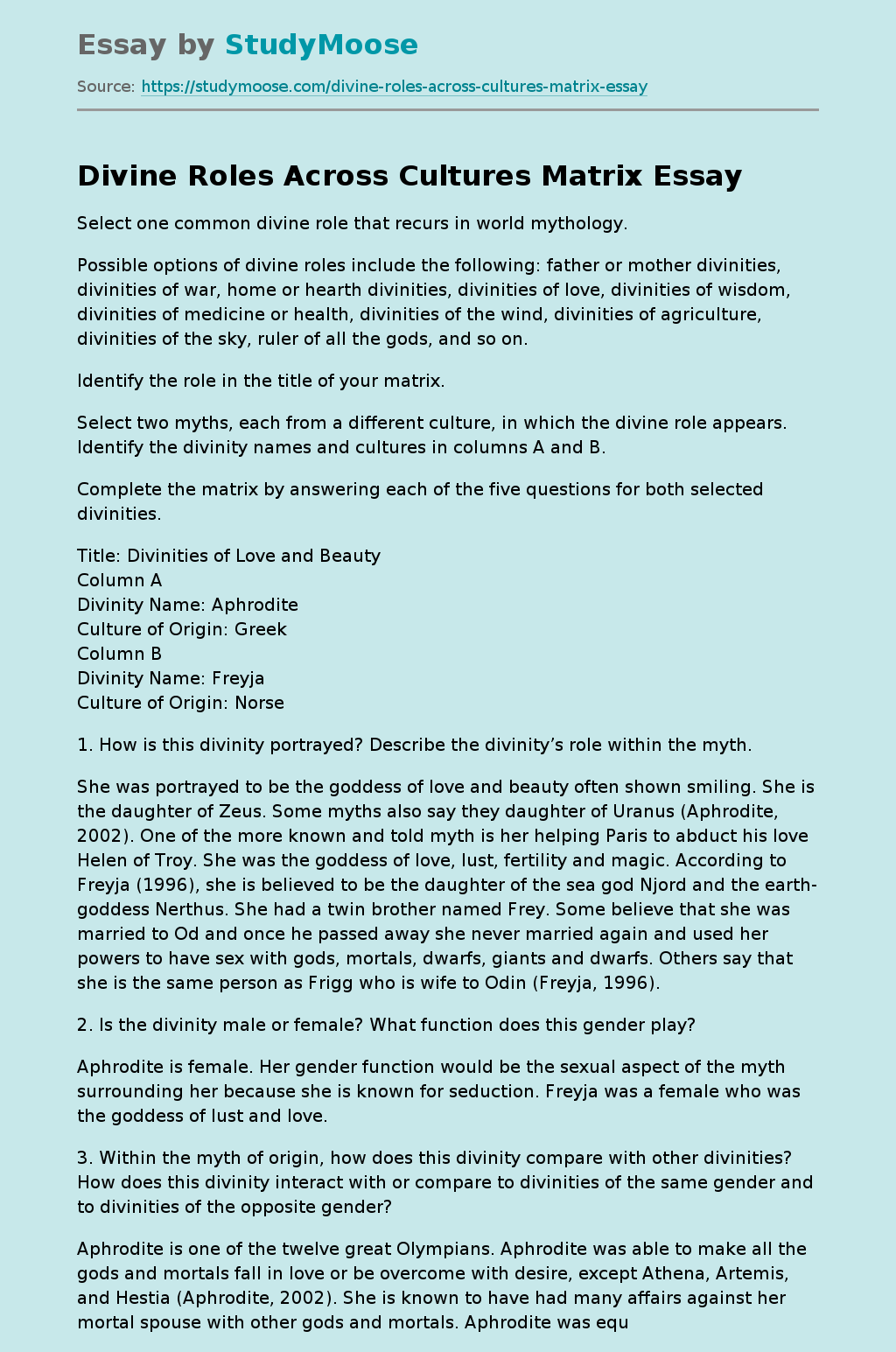