The belief in divine powers controlled civilian life in the ancient world. Piety, sacrifice, and complete devotion were necessary to keep these gods happy. In both ancient texts, The Epic of Gilgamesh and The Aeneid, this sort of respect and dedication to the gods is seen. Although ruling at different times, both kings in these epic adventures face uniquely different divine powers that have a diverse way of handling each culture. The role of the gods, although present in both hero’s journeys, differ dramatically for Aeneas and Gilgamesh by means of the amount of freedom the divine powers allow, and how their gods bring each character’s culture to justice.

Don't use plagiarized sources. Get your custom essay on
“ Divine Intervention ”
Get custom paper
NEW! smart matching with writer

The gods are not only a necessity for spiritual guidance, but they also have a vast influence on the direction of a mortal’s life on earth. The amount of direction and guidance they provide, however, varies with the two stories, The Aeneid and The Epic of Gilgamesh. Throughout Aeneas’s journey there is a divine intervention with every step he takes.

The gods have predetermined his course to find a new land in Italy, and they have been able aid him with every challenge that Juno presents. Aeneas has no choice and must follow the will of the gods. For example, while fleeing the war-torn Troy Aeneas spots Helen and wishes to kill her, giving her what he feels she deserves.

However, before he is able to do this Venus appears to stop him and mentions that it is not Jupiter’s will for her to die then (Virgil, Book II, 1210-1211).

This knowledge from the gods prevents Aeneas from killing Helen, and continues to push him towards his already-planned fate. Even when Aeneas has to leave Dido against his own will, he is forced to stay on the path that Jupiter intends him to. His heart lies with Dido, however we see that he has no choice when he proclaims to her, “Cease to enflame my heart and yours with plaints: not by my choice I go to Italy” (Virgil, Book IV, 360). The gods have even more influence over Aenea’s own heart, which demonstrates the powerful role their presence plays in this ancient world.

The lack of freedom that Aeneas has with his own life significantly differs from the amount of freedom Gilgamesh has. Whereas the gods had a hand in every action, plan, and direction of Aeneas’s life, their presence was not as dominant with Gilgamesh. Gilgamesh was allowed much more free will by the gods. With little intervention, Gilgamesh is able to do as he wishes throughout his city including claiming first sexual rights to women (Gilgamesh, Tablet 1, 63). Later on in his journey he seeks to find immortality, which is not a will of the gods, further demonstrating the lack of guidance the gods have in a mortal’s life on earth.

In his epic story the gods take on a more passive role, dealing with the actions of mortals after they have occurred. If anything a mortal does displeases the gods then a negative sentence will be decided upon after the fact. For example, when the gods decide to create Enkidu because Gilgamesh is terrorizing his own city. The creation of Gilgamesh’s soon-to-be brother has the hidden motive to stop these wrongdoings (Gilogamesh, Table I, 64). However, it was not until after the negative had occurred that the gods decided to do something about it. This is different for Aeneas, whose god’s already know what is ahead for mortals and no other plan is necessary.

The gods not only play a significant role with mortals during their life on earth, but they also play a role when it comes to judgment day. Piety and devotion to the gods during a mortal’s life is needed in exchange for a positive afterlife. For Aeneas and the people of his time Virgil creates an afterlife where people are judged according to their virtue during their time on earth. There are many sections of hell, some of which are reserved for those with greater sins. As Aeneas travels he witnesses, “Rhadamanthus rules; he hears and chastens fraud; all must confess their sins committed on earth and tucked away for atonement” (Virgil, Book 6, 1256).

Since people expect this judgment to come after their death it makes the devotion to the gods that much more important when they are alive. The gods have a say in what people do during their lifetime on earth by controlling their fate, and also have control over how people will live their spiritual life by passing judgment when they die. This expectation of judgment day makes the presence of the gods much more significant.

In contrast, the idea of the gods having control over a mortal’s afterlife is not present in The Epic of Gilgamesh. The gods do have a great deal of influence on how a person behaves while living by demanding sacrifices, and harshly punishing those who do not conform to their wishes. However, the people of Gilgamesh’s time were not looking to do good deeds on earth for a better afterlife, but instead they were more focused on leaving a legacy behind them for others to remember them by. For example, Gilgamesh is not worried about having a son to lead when he is gone, but instead is more interested in building a strong wall so that he will always be remembered. He is looking for immortality through means of fame. However, even though the gods do not seem to have a role in the afterlife, they do pass out punishments that are sometimes harsh enough to end a life on earth.

For example, after Gilgamesh and Enkidu defeat the Bull of Heaven, Ishtar is extremely angry and demands that Enkidu pays for his actions. The gods argue, “because they have killed the Bull of Heaven, and because they have killed Humbaba who guarded the Cedar Mountain one of the two must die” (Gilgamesh, Tablet III, 76). This argument and decision to kill either Gilgamesh or Enkidu shows that the gods had no planned destiny for either and that the hero’s actions determine their fate. Had Enkidu not had any hand in these deaths, his life would have held something different. This is opposite of Aeneas’s life, in which he had every step of his journey mapped out, knowing what his final destination would be.

The gods have been portrayed in literature since ancient times. However, as time progressed, the responsibility of the gods changed. Throughout Gilgamesh’s time, the gods were only concerned with a mortal’s life on earth. People had as much free will as they could hope for, however any actions that displeased the gods would face repercussions. Later on during Aeneas’s time the gods played a much more intricate role in a mortal’s life not only on earth, but in their afterlife as well. Fates were predetermined, but devotion to the gods was still needed to determine where in the afterlife a person would go. Although a noticeable presence in each hero’s journey, Aeneas and Gilgamesh face extremely different gods. 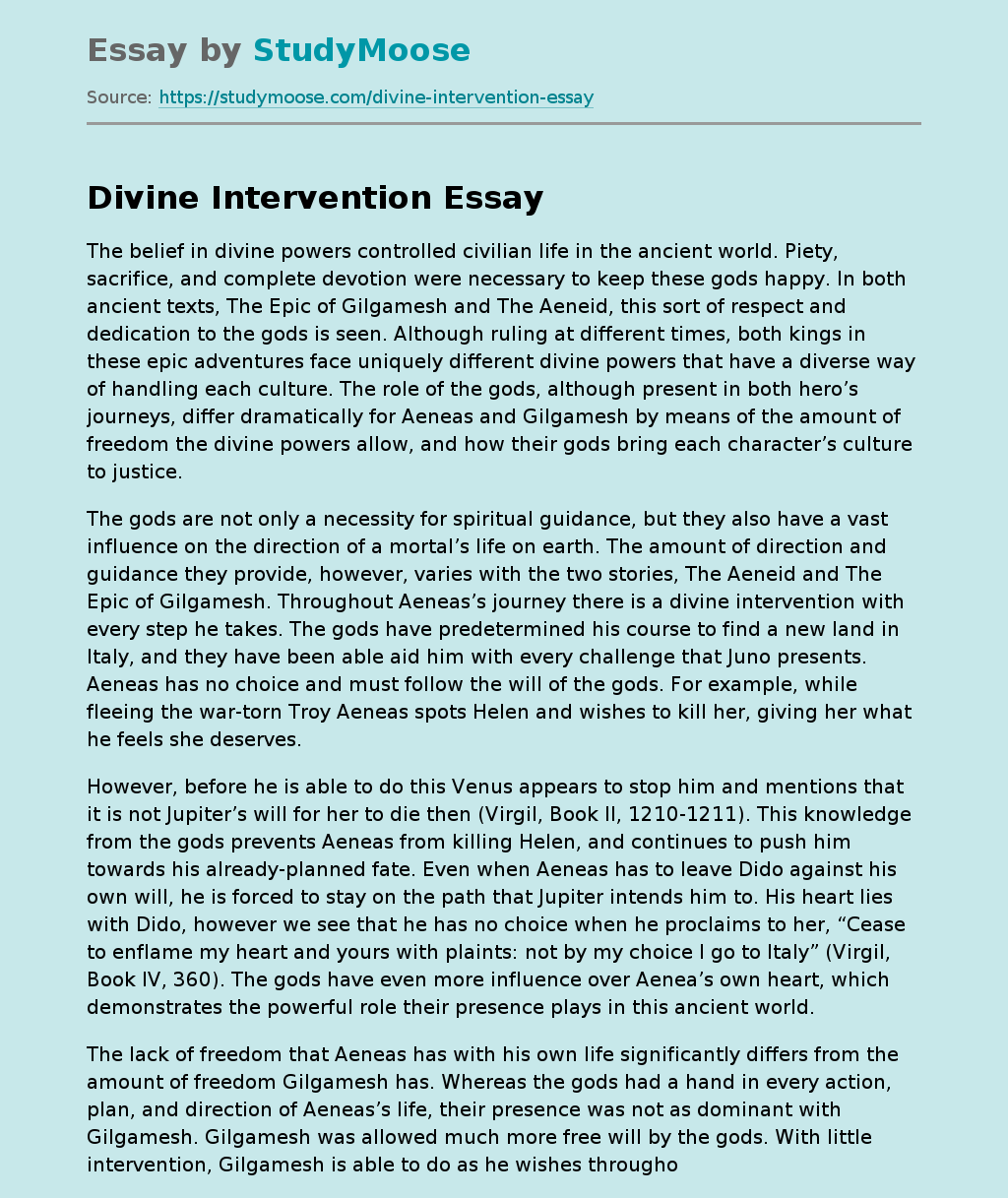