Diversity of individuals with dementia and the importance of inclusion

• diversity
The Service Users i deliver care to are all different in many ways.This can be along the dimensions of gender, age, ethnicity, race, sexual orientation, socio-economic status, physical abilities, political beliefs, religious beliefs or other ideologies. This means that i have to be aware of a person’s individuality and respect their choices. To be understanding and not show prejudice. Valuing the benefits of someone being different from ourselves, not making assumptions.

Don't use plagiarized sources. Get your custom essay on
“ Diversity of individuals with dementia and the importance of inclusion ”
Get custom paper
NEW! smart matching with writer

• anti-discriminatory practice
Anti discriminatory practice is the measure that is taken to prevent any type of discrimination that is based on race, disability, gender and class where it also takes into account how people behave towards others in society. Service users should not be treated any differently because of the way they live their lives, they should be treated equally. Promoting procedures and systems to make sure that discrimination does not happen. Making sure individuals aren’t excluded. • anti-oppressive practice

see more:describe how agreed ways of working relate to the rights of an individual with dementia

Anti-oppressive practise is challenging all forms of discrimination e.

g. racism, ageism. Challenging inequality and speaking out when someones behaviour is unacceptable. Encouraging service users to report incidents. Being assertive. Using person centred approach. Valuing individuals. Anti-oppressive practice is an attempt within social work to acknowledge oppression in societies, economies, cultures, and groups, and to remove or negate the influence of that oppression. (http://uk.ask.com/wiki/Anti-oppressive_practice?lang=en)

1.2- explain why it is important to recognise and respect an individual’s heritage

It is important to recognise and respect an individual’s heritage as their heritage is their past life history , it can tell us a lot about the individual, especially if their lacking in communication skills and cannot tell us themselves. If we know more about the history of a person with dementia, we can learn their likes and dislikes. We get to know what makes them happy or what makes them sad and then we can deliver the best care possible. It shows that we respect the individuals culture, language, religion which enables the service user to be themselves. It would help the service user to feel valued, and prevent isolation and withdrawal from other people. It would benefit us to build a rappour with the service user, enabling them to form relationships with others

1.3- describe why an individual with dementia may be subjected to discrimination and oppression

1.4- describe how discrimination and oppressive practice can be challenged

To challenge discrimination i think we need to be educated about dementia, how it affects the person and there families and how to care for the person in a way that meets there needs.We are all individuals and everyone has their own unique character and personality, which are developed through the different life experiences, cultures and beliefs we follow. It is also through other factors such as social class, age, ethnicity, culture, background and gender. It is important and essential to treat different people as individuals and to try and meet their needs rather than stereotyping people. E.g. all old people are the same. Treating everyone the same is failing to respect diversity. We all want to be treated with dignity and it is a very important part of an individual’s life. Working in the health and social care profession it is important to help people maintain their dignity so they can keep their sense of self-respect and self-worth.

All health and social care professionals should be sensitive and aware of the needs of people and service users. Just because a person has dementia, they still need to be given a choice and not assume that they cannot make a choice. Not everybody is the same, there are different levels of dementia, so getting to know the service user is vital to challenge discrimination. We also need to make sure that the service user or their families are aware of the complaints procedure. Having policies and procedures are put in place and that staff are up to date on their training.

Understand that each individual’s experience of dementia is unique

2.1- explain why it is important to identify an individual’s specific and unique needs It is important to identify individual’s specific and unique needs so that they can receive the best care possible. Taking a person centred approach is vital, treating a service user as an individual person and acknowledge that they have different needs to the next person. For example i have a Service User DR who has a grade 3 bedsore. DR is bed bound, it has been identified that DR needs to be turned regularly so that his bedsore can heal affectively, he requires 5 calls a day to make this possible. This is so important to his health. If this hadn’t been identified than DR’s bedsore could get worse, he could be in a lot of pain and discomfort.

2.2- compare the experience of dementia for an individual who has acquired it as an older person with the experience of an individual who has acquired it as a younger person Dementia is more common in people over the age of 65, therefore there are more services provided, such as day care, i recently worked a couple of days in a day centre, all the service users were over 65, we played bingo, dominoes and listened to old war time songs, they got involved and really enjoyed the time they spent there. All these activities are centred around the service users being older. If a younger person under the age of 65 with dementia was to attend this day centre, they may not be able to relate or enjoy these activities as much. I don’t think there are as many serviced available to the young living with dementia. Most of my service users are over 65.

I did have one service user AK that was only 46. She was very independent and could still manage day to day living; she often went out and was very active. She conversated very well and was aware of her illness which is a rarity. But there was no other service available for her, no where that she could meet other young people with dementia. She didn’t have much family, she had a sister who also had dementia, and young nieces and nephews, so they were unable to provide any care or support. This differs from someone older with dementia, if they have children they are normally older, have more time if they have retired, less financial commitments ie. Mortgage paid off. So they have a bigger support network. They also may have have less financial ties if they are older. If a younger person is diagnosed with dementia, they may still have a mortgage to pay for this would be very stressful if the individual had to give up work, they don’t have a pension, or a regular income that they can rely on to pay for care. 2.3- describe how the experience of an individual’s dementia may impact on carers Many carers report personal satisfaction from their caring role.

However unpaid caring can have a considerable impact on a carer’s health and wellbeing. Depression, emotional and physical exhaustion and general poor health are common. The Princess Royal Trust for Carers (2011) found that: Two thirds of older carers have long term health problems or a disability themselves One third of older carers reported having cancelled treatment or an operation they needed due to their caring responsibilities Half of all older carers reported that their physical health had got worse in the last year More than 4 out of 10 older carers said that their mental health had deteriorated over the last year. Caring can be an emotionally draining experience. Carers have to come to terms with irreversible and upsetting changes in their relationships, such as a child now caring for a parent. Caring can also be very lonely. Many carers report being cut off from their former social circles which brings feelings of isolation and depression. Two thirds of all people with dementia live in their own homes.

Diversity of individuals with dementia and the importance of inclusion. (2016, Mar 31). Retrieved from https://studymoose.com/diversity-of-individuals-with-dementia-and-the-importance-of-inclusion-essay 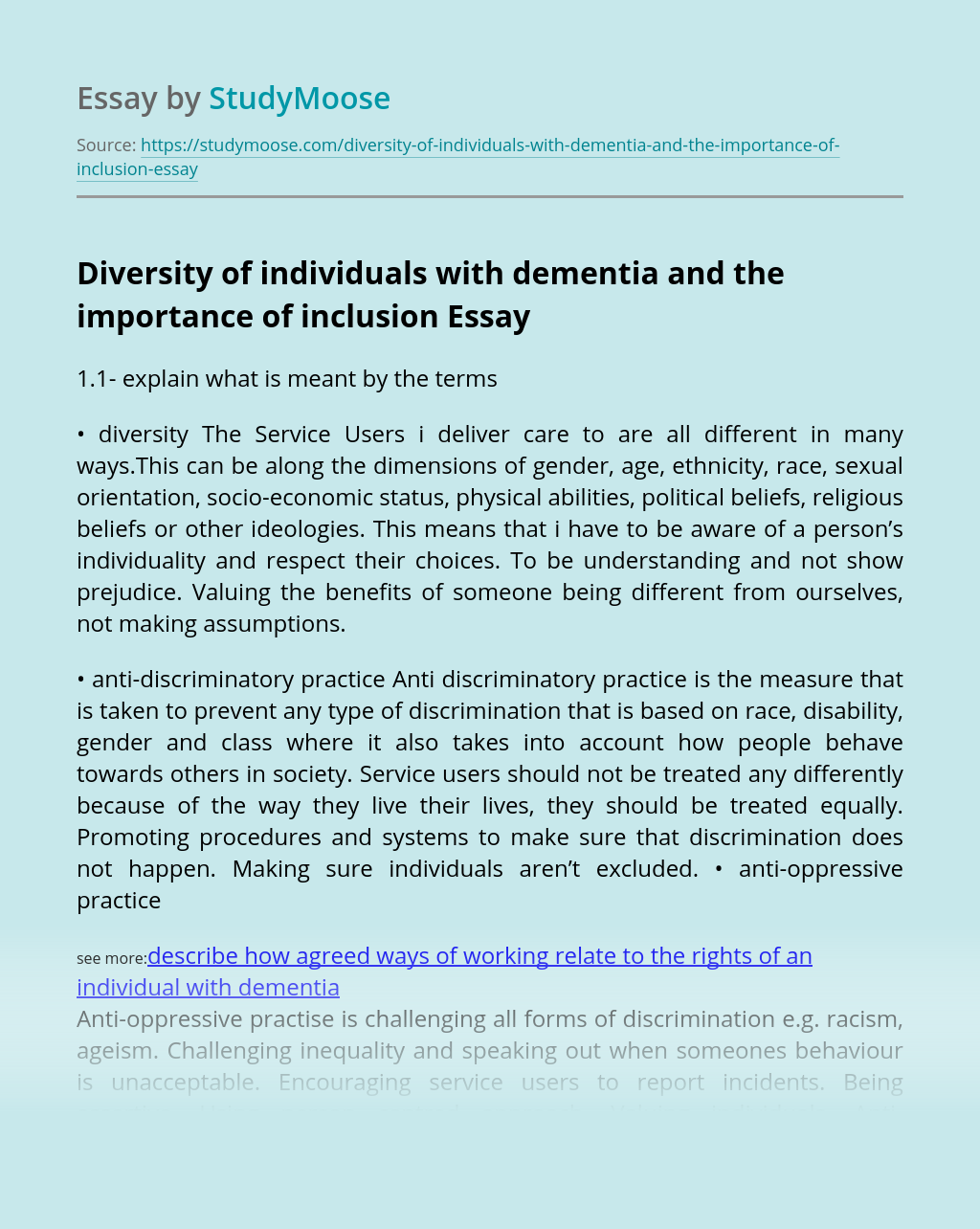