Diversion Programs in the Dallas Area

Diversion programs are usually misunderstood by society, and in some cases is believe that they do not work. However research conducted by different organizations has found that they in fact do reduce recidivism amongst juveniles diverted V. those that were not. Diversion as described refers to “the attempt to divert, or channel out, youthful offenders from the juvenile justice system” (Bynum and Thompson, 1996:430). In this paper it will be discuss what are the causes of juvenile criminal behavior, and what goals does the two different diversion programs have to combat those behaviors and rehabilitate juveniles.

Don't use plagiarized sources. Get your custom essay on
“ Diversion Programs in the Dallas Area ”
Get custom paper
NEW! smart matching with writer

Also it will discuss what service do they provide and witch one is the most effective.

First of all when talking about juvenile delinquency research has found that no single cause of behavior accounts for all delinquency, however that study is inconclusive since the study has not been confirmed 100%. The Office of Juvenile Justice and Delinquency Prevention (OJJDP) is sponsoring the research and is focusing in serious delinquency and drug abuse as those two have been found to be the leading causeways of juvenile criminal behavior.

OJJDP has conducted causes and correlation studies designed to improve the understanding of violence and drug abuse, they have looked at how a youth develops within the context of family, school, peers and their respective community.

One of the challenges is to determine the longitudinal investigation since some times this juvenile’s turn into what society determines as adulthood, and the investigation is no longer valid. The way they have conducted this searches is by sampling youths in a six to nine months period one example is: Denver youth includes 1,527 youths ages vary from seven to 15, and they all come from different backgrounds but pronominally from “high risk neighborhoods”

The key participants for this programs as described above are juveniles that their age ranges from seven to 15 years of age, as per the report published by the OJJDP in September, 1999 2.

8 million juveniles were arrested, since then that number has declined one of the causes for this is the improvement in diversion programs. As one of the analysts puts it “Diverting appropriate youthful offenders from detention can pay dividends for youth who are not a danger to themselves and for those remaining in detention. It also alleviates overcrowding…” (Bilchik S, 1999)

This paper is exanimating two different diversion programs in the Dallas area; the “Dallas County Juvenile Department believes that for certain youth, treatment rather than punishment alone is the most effective strategy in avoiding future involvement with the juvenile justice system. Diversion programs offer youth an opportunity to agree on voluntary conditions that closely resemble probation, but are imposed by the probation officer instead of the Court. First time offenders with minor offenses and indicate certain criminal behavior risk factors may be eligible for specific diversion programs. Successful completion of the agreed conditions allows these youth to avoid appearing in Court, and prevent them from permeating into the juvenile system.” (DCJV, 2014) With all that said the two diversions programs used are one is the “Diversion Male Court (D.M.C.) targets minority males with first time and minor referrals.

Using community-based alternatives to empower the youth and family, D.M.C. aims to reduce the disproportionate representation of minority male youth in the juvenile justice system. Community service providers in conjunction with the probation officer focus on issues which predispose the identified minority male youth to delinquent behavior.” (DCJV, 2014) And the other is the Drug Diversion Court that; “identifies and intervenes with youth who have a history of substance abuse. Youth involved in the program participate in community-based drug treatment programs, attend weekly court sessions, submit to regular drug testing, and consistently report to their probation officer. They receive the tools and support needed to live a drug-free life and remain out of the justice system.” (DCJV, 2014) As of 2013 drug related offenses involving juveniles in the Dallas county area went up from the previous year; in 2002 there were 94 and in 2013 there were 111. As far as assaults they were down from 2012 to 2013 from 244 to 229.

Trying to identify the effectiveness of these programs is complicated since they are involving two different offenses, however more often than not they are related. Assaults and drug offenses are closely tied together in the juvenile criminal world. But their goal is the same in both cases to reduce the number of youth in detention and to provide them with some sort of community based program, in order to keep them occupied and help to rehabilitate them, and in return this will reduce recidivism amongst juveniles. If we were to look at just numbers I will say that the Drug Diversion Court has had more success in the Dallas area with its programs, however that can be disproportional because the amount of offenses.

In conclusion this paper covered what is diversion, how it is applied and how it does work for two different programs in the Dallas county area. It is important to remember that this as effective as it might be in the Dallas area is not the same in other areas, disproportion on the studies and in the way that some ethnicities are group, and not to forget the age, makes it hard for this studies to be 100% accurate.

Diversion Programs in the Dallas Area. (2016, May 30). Retrieved from http://studymoose.com/diversion-programs-essay 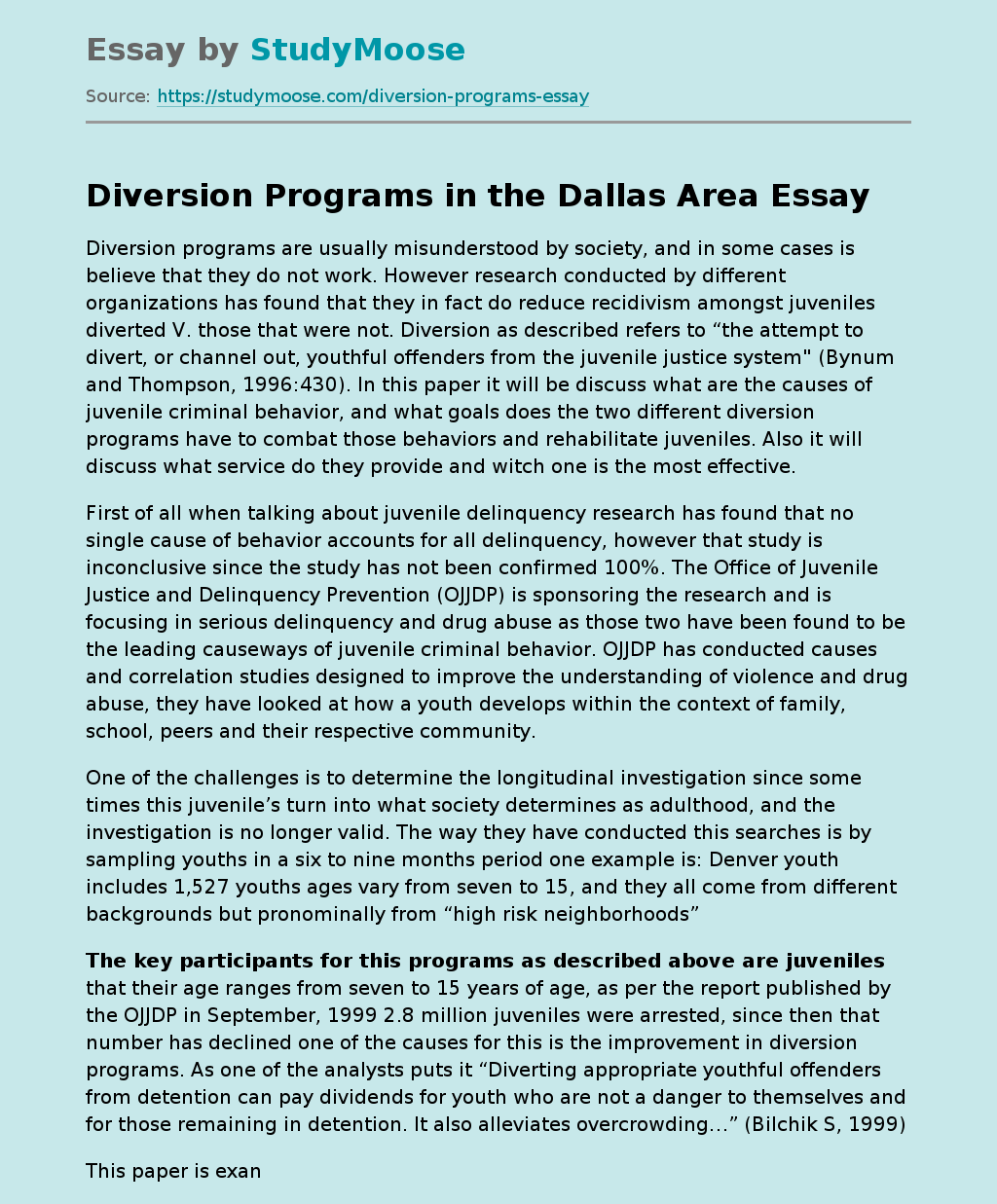