Hughes’ 20th century confessional poems, “Fulbright Scholars” and “Your Paris” offers a perspective on his tempestuous relationship with Plath, persuading the reader that he was the victim suffocating under Plath’s mental instability. Similarly, George Clooney’s (2005) American dramatic film, “Good Night and Good Luck”, in conjunction with Hughes poetry demonstrates how the composers represent their ideas of conflicting perspectives on shared events in unique and evocative ways.

The memory of an event can fade, creating an unreliable narrator and thus an unreliable perspective of a person, event or situation.

Hughes’ post World War II poem “Fulbright Scholars”, is a poetic form of flashback that evokes conjectures of possible experiences differing from themselves by exploring the conflicting perspective of an older nostalgic Hughes and his younger “twenty five” year old self. Hughes’ persona is introduced through the constant use of first person as he reiterates “Maybe I noticed, maybe I weighed you up”.

The uncertain language of ‘maybe’ is an indulgent critique of the unreliability and perverse selectivity of memory, and this is further emphasises through the constant use of juxtaposition, “Just arriving – or arrived… I studied it, Not too minutely”.

As he first encounters Plath, he compares her to American film actress Veronica Lake with her “Veronica Lake bang” and “exaggerated American grin”. Plath’s public image is symbolic of her fraudulent behaviour and Hughes puts forward the perspective that she was fake, a phony, that “what it hid” was her inner destructive, psychological nature.

Hughes utilises sensual imagery where he eats a “delicious… First fresh peach”, symbolic of his temptation towards an effervescent Plath and the physical nature of the relationship.

The use of ironic imagery discharges an emotive, personal tone which in turn persuades the reader to empathise with Hughes as he was “dumbfounded afresh” by Plath. Consequently, individuals can be selective in their choices when representing a person, event or situation and omit key elements, controlling the response of the responder.

Similar to how Hughes’ anthology, “Birthday Letters”, expressed through inherent subjectivity, George Clooney’s 1950’s era, Good Night and Good Luck, echoes this as he represents this idea through the media. Through filmic devices, Clooney explores the tension between the perspectives of reporters at CBS and Senator Joseph McCarthy in viewing McCarthy’s actions as he, “takes charge… of Communist infiltration”. Just as Hughes’ relationship with Plath raised questions from public opinion, but he dismisses their viewpoints through his emotional poetry. Clooney uses Edward R.

Murrow to expose Senator McCarthy as a fear monger of communism in his television segment, “See it Now”, as he presents his story from a low angle shot. This presents Murrow in a powerful position as he uses the media to announce his perspective on McCarthy to the citizens of America. As he addresses the story about “a man.. Regarded as a security risk.. If associated with Communists”. Additionally, “it seems to us… Myself.. That this is a subject that should be argued about endlessly”, Clooney has represented conflicting perspectives as Murrow presents this narrative with inherent subjective bias through the dialogue.

Essentially, conflicting perspectives can be formed at one time when one is intimately involved and then shared at another time, hence generating deeper insights into people, events and situations. All observations by the poet reveal his unique perspective, on their 1957 honeymoon, evident in “Your Paris”. Within “Your Paris”, Hughes’ title uses accusatory second person speaker, ‘you’, and sarcastic tone to shape the responders perspective of Plath’s naive “shatter of exclamations”. The “post-war utility survivor” attitude of Hughes conflicts with Plath’s artistic and stylised vision of “frame after frame” of “Your Paris”.

Hughes juxtaposes her “sunny exposure” of her Parisian streets to his personal perspective of “bullet scarred… Quai stonework” and “cafes filled with SS mannequins”. Hughes reflects on how her cheery facade hid a painful reality, highlighted by the simile, “your lingo… like an emergency burn off to protect you from spontaneous combustion”. Hughes has chosen figurative language which seeks to create empathy in the responder through Plath’s mental instability. The animal imagery found in the metaphor, “the mere dog in me happened to protect you” positions himself as a loving and patient husband in spite of her psychosis.

Consequently the representation of events in persuading the responders that their perspective is unique and the truth. Just as Hughes has been blamed for Plath’s suicide, the conflicting perspective fuelling public debate when CBS reporter, Joe Wershba, is convinced by Murrow’s incisive argument. This is evident when Wershba is approached by a government representative, in a close up shot to tell him, “Murrow’s been a Communist sympathiser since the 30’s”, but Wershba soon dismisses that statement by replying, “Everyone knows that Ed Murrow is a loyal American, he’s a patriot”.

Murrow manipulates and persuades the viewers of “See it Now”, to adopt his perspective on McCarthy through the persuasive dialogue, “This is no time for men who oppose Senator McCarthy’s methods to keep silent”. The imperative language combines ironically with the cheerful, diagetic music as it sets the tone as the reports celebrate Murrow’s story on exposing McCarthy for what he truly is. Inevitably, we see that through persuasion by the media, Murrow has fuelled a public debate about political choices as he as influenced others, eventually leading to the downfall of McCarthy.

Therefore, time impacts on our perspective and it is evident that conflicting perspectives have been effectively represented in unique and evocative ways by Hughes’ poems “Fulbright Scholars” and “Your Paris”, and Clooney’s “Good Night and Good Luck”. Both composers portray their personal perspective on through their eternal subjectivity in order to shape the audiences understanding of the key people and events. 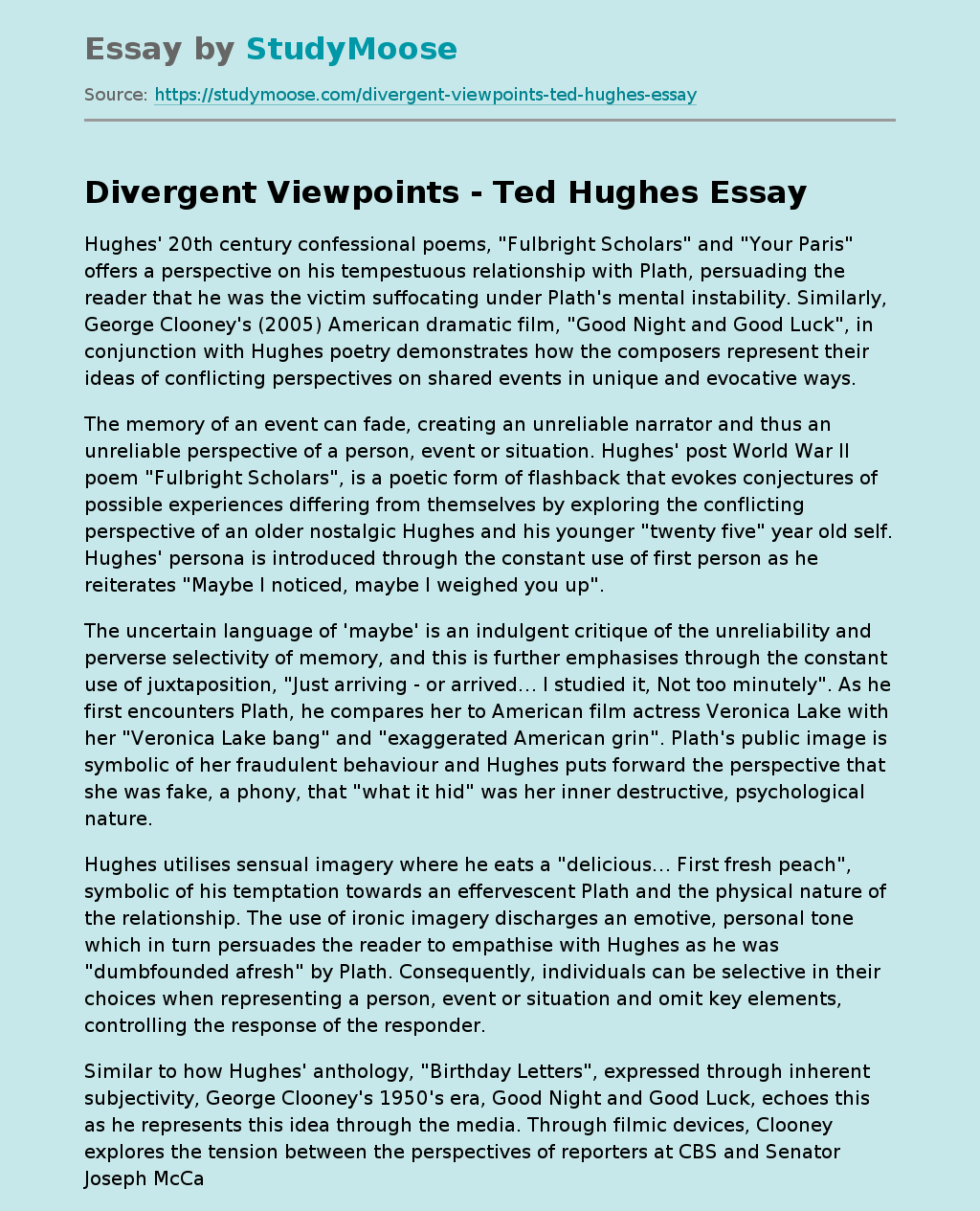