A distinctively visual text influences our view of the world, and object or a person by the composer presenting us with new ideas and emotions that let us see from another point of view. Henry Lawson is an Australian writer that has the ability to twist his readers into his stories so they understand the true feelings and emotions of the characters. He presents us with the idea the bush is a negative place to live. But all Australians have a connection with it.

Don't use plagiarized sources. Get your custom essay on
“ Distinctly Visual Essay ”
Get custom paper
NEW! smart matching with writer

Distinctly visual texts affect how we see the world and our relationships with others. Henry Lawson acknowledges the hardships of Australian women whose bravery and perseverance is unfairly over looked. Lawson’s admiration of the wife is evident in the portrayal of a strong and independent female protagonist. While the characters traits of the hattered old dog “alligator” are amusingly represented, it remains the wife who really fascinates the reader. Her appearance and behaviour can be readily pictured and we easily identify with her hopes and fears.

He then reflects the harshness with the characterisation of the “Gaunt sun brown woman” and her “four ragged, dried up looking children”, This shapes our understanding of the unique Australian traits of toughness and courage towards a hostile environment like the bush. We never learn her name and this anonymity increases the representative role she plays, making the reader more reflective and empathetic about what is revealed, especially when given access t o her thoughts and feelings. By visualising the bush woman’s surroundings the reader can connect with her frame of mind.

One is left with an overwhelming sense of loneliness and hardship.

Through the use of flashbacks Lawson presents us with the different situations the women has been confront with and the way she has had to overcome them while her husband has been away “she fought a bush fire.. She fought a flood.. She also fought a made bullock’ and now a snake. The vivid imagery of the environment creates the feeling of isolation and monotony that the drover’s wife experiences in her day to day life. Lawson positions us to accept his visual interpretation of life in the bush defined by continual hardship instead of focusing primarily on the contents of the bush, Lawson focuses on what is lacking.

The Lost Thing is a humorous story about a boy who discovers a bizarre looking creature while out collecting bottle tops at a beach. Having guessed that it is lost, he tries to find out who owns it or where it belongs, but the problem is met with indifference by everyone else, who barely notice is presence. Each is unhelpful in their own way, strangers, friends, parents are all unwilling to entertain this uninvited interruption to their day to day life.

In spite of his better judgement the boy feels sorry for this hapless creature, and attempts to find out where it belongs. The story soon develops into a fable about all sorts of social concerns, with a ambiguous ending. For a start ‘the lost pet’ is unlike anything we might normally expect. It is a huge tentacled monster, not quite animal or machine, with no particular function or origin. Whimsical, purposeless and estranged from everything around it, it is out of place in a much deeper sense that just being ‘lost’.

The environment described by the illustrations also resists any simple reading. A treeless industrial metropolis full of excessive plumbing, mysterious and dehumanising architecture, green skies and cheerless citizens. Nobody pays attention to this ‘lost pet’ despite its disruptive presence, every citizen is too busy in their daily routine to notice. The text is written as a matter-of-fact anecdote, told by the boy and addressed to the reader, presented as a kind of “what I did over summer” story (hence the use of hand-written text on strips of note paper).

Significantly, the creature in question is never physically described, and there is very little said about the environment in which the story unfolds; this is where the illustrations take over. Read by itself the text would sound as though it is about a lost dog in a quite familiar suburb or city, but the pictures reveal a freakish tentacled animal in a surreal a treeless world of green skies, excessive plumbing, concrete and machinery Another short story written by Henry Lawson that displays this connection with the land is “the loaded dog”.

It tells a story of three men that are working on a gold field and leave a explosive lying around. This explosive is then picked up by their dog, who chases them with it lit in its mouth. Unlike “the drovers wife” Lawson’s ability to balance the harshness of the wish with the larrikin characters. Allows him to make the story entertaining but also life threatening. The visual image of the men following each other being chases by the dog with an explosive in its mouth is an example of this humour Lawson uses throughout the story to conceal the bush during the tory. Lawson uses the almost dried up creek as an example of the ruthlessness the bush has on it occupants. The men usually use the fish as their main source of food but because it has turned into a “chain of muddy waterholes.. six to seven feet deep” they are fearing they will starve. So they come up with a plan to catch the fish using an explosive. A dog is also present in “the loaded dog” but it does not have a protector role like the one in “the drovers wife” rather Lawson mainly convey “Tommy.. big, black… retriever dog.. as their four legged mate” this mate ship is the only thing that is positive in the story, although Lawson uses him as the main cause of all the trouble and excitement. Henry Lawson short stories are both visual texts that have contributed to the Australian myth and have become a voice for the individuals of the 1890’s. His stories still have a meaning of heritage and belonging for today’s society. Shaun tans “the lost thing” provokes questions 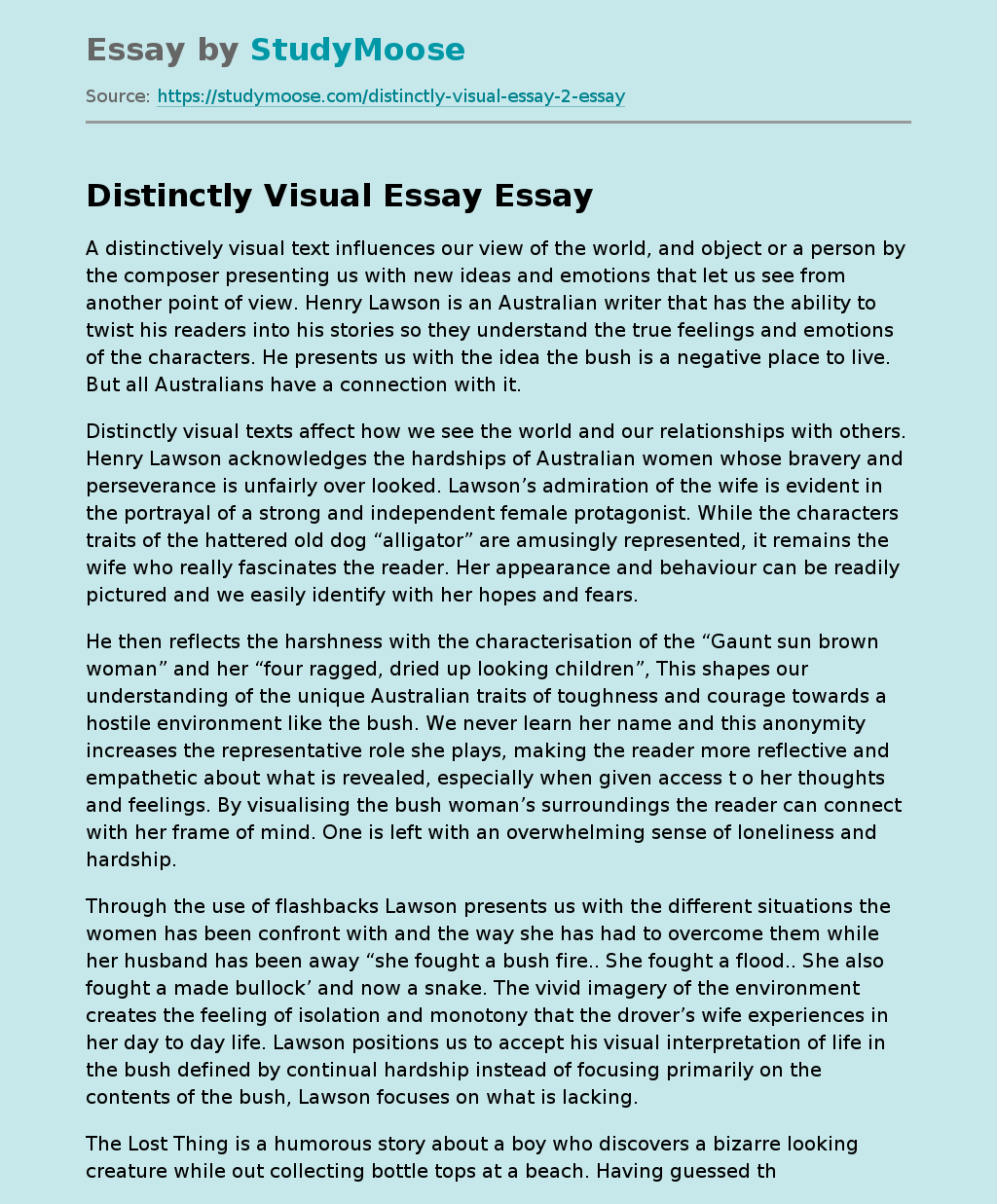