Distinctively visual images can communicate important ideas to responders, allowing them to understand the perspective of the composer and the purpose of the text. In the “Shoe Horn Sonata” John Misto creates a play that surrounds two Prisoners of Wars (POW’s) characters who are forced to relive the memories of the past through an interview for a TV documentary. Through a variety of dramatic techniques, Misto suffering of the POW’s, the strength of music and hope, and the healing nature of truth.

Don't use plagiarized sources. Get your custom essay on
“ Distinctively Visual Images in a Play Shoe Horn Sonata ”
Get custom paper
NEW! smart matching with writer

Similarly, written by Bruce Dawe the poem “Weapons Training” employs a variety of techniques to create the distinctively visual image of the issues of the harsh realities of war through the brutal nature and the idea that death can come at any moment.

The power of music is evident, through the repetition of “rose and rose” and the women are able to “forgets the japs, forget our hunger, forget everything” communicated through Sheila. This also creates the image of the strength all the POW’s held to endure the harsh treatment of the Japanese soldiers and also to overcome the atrocities of war, enabling audiences to recognize and commemorate the sacrifices made by the POW.

The healing nature of truth suggested as a distinctively visual image is created, allowing audiences to feel enlightened. There is an acknowledge of Bridie and Sheila’s reunification and a realisation that the war is over for them both as they reveal the truths they have been suppressing. Through Bridie’s rhetorical question of, “Do you want me to tell the truth?” reveals an admission that there has been something hidden, a metaphorical barrier that cause them to feel restricted from living a normal life. The image of the healing nature truth is created as they feel the weight of their trauma being lifted as the war is finally over for them both spiritually and emotionally. This enables a representation of the women’s pain of the past to be created, as they were able to speak out all the truths they have bottled up and revisit their past. As responders, re realize that facing these realities have made them feel free to live their remaining lives in peace with one another and themselves, allowing the audiences to feel a deep sense of recognition

Similarly, Weapon Training uses a range of poetic techniques to create a distinctively visual image of the harsh realities of war. This poem is written in the form of a dramatic monologue, the speaker being an overtly aggressive drill sergeant, teaching his soldier listeners about the dangers of war, and through this overbearing stance we get as an impression of him, the distinctively visual image of aggression is shown as we believe that the soldiers must become like he is to survive the atrocities of war.

The distinctively visual of the brutality of war is revealed through the derogatory language used by the drill sergeant. He describes the Vietcong in crude terms as he feels the need to dehumanise the enemy, reinforcing the idea of the mindless killing involved in the act of war. The arousal of fear and loathing the sergeant encourages in his men allow the audiences to feel empathy for the soldiers as we see the Vietcong are too easily killed as they are just “a mob of yellows” indicating how soldiers must be numbed of all emotion. He has the responsibility of training them for war and the distinctively visual image of urgency, fear and confusion that is tied in with battle is explored through, “you know what you are you’re dead, dead, dead.” The short snappy sounds mimic the rapid bursts of gunfire to highlight the idea that death can come at any time as well as the sobering reality of war. This leaves the audience with an image of the demanding nature of war, allowing them to respond in shock as they are forced to experience the sergeant’s abuse first hand.

In conclusion, it becomes evident that John Misto has crafted a drama that has created distinctively visual images of the thematic concerns of the text using a variety of sound, lighting and visual techniques. In addition, Dawe’s effective use of language and structure all cleverly engage the reader and make the audience evaluate the theses of the negative aspects of war. Both texts has effectively shown responders what individuals have experienced through the use of language and have painted a distinctive visual to convey ideas of the brutality and horrendous nature of war as responders understand the purpose of the text.

Distinctively Visual Images in a Play Shoe Horn Sonata. (2016, May 10). Retrieved from http://studymoose.com/distinctively-visual-images-in-a-play-shoe-horn-sonata-essay 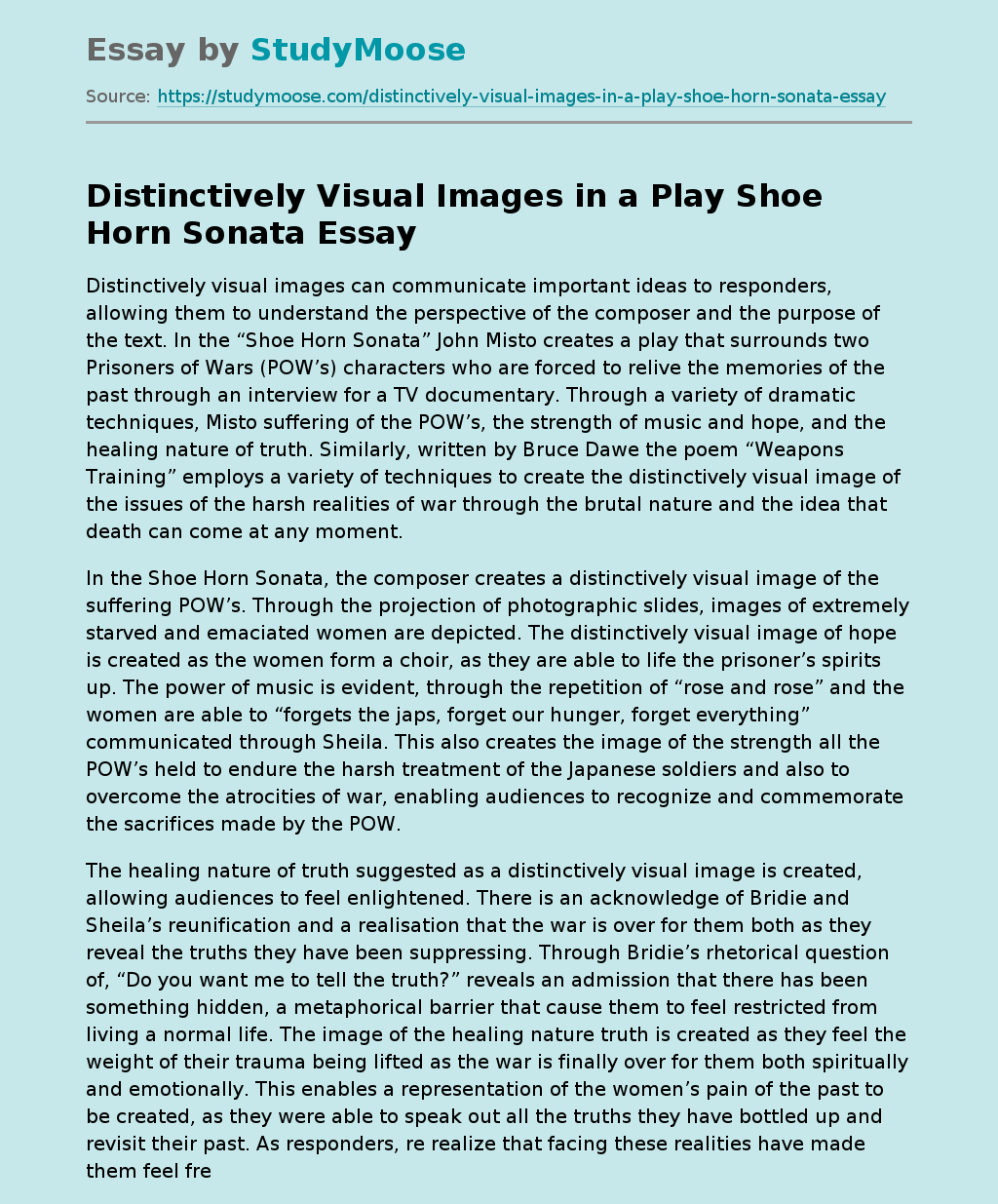