Don't use plagiarized sources. Get your custom essay on
“ Dispositional Personality Theories vs Biological Theories ”
Get custom paper
NEW! smart matching with writer

The theory also states that each person has a different set of dispositions, or that their sets of dispositions have different strengths which assembles a unique pattern. There are two different types of dispositional theories, type and trait theories. Type theories assign people to different categories. These categories depend on the individual’s temperament. Hippocrates and Galen suggest temperament is based on body fluids (which sounds a bit outlandish). Blood is said to represent the sanguine temperament.

This is a person who is warmhearted, optimistic, and laid back. Phlegm is a phlegmatic person who is lethargic, calm, and slow to action (when one thinks about this in relation to actual phlegm it is quite disgusting). Black bile is a melancholic person, an individual who might be very sad and depressed. Last but not least, is yellow bile, which represents a choleric personality. A choleric personality is someone who is angry, assertive, and quick to action. The theory states that whichever body fluid is highest determines the personality type.

As a modern person this theory sounds implausible. If one has a cold, and therefore more phlegm does that change their personality? And for how long does the personality change last? As long as the cold lasts or longer? The other type of dispositional personality theories is trait theories. Trait theories assume people have many traits that are continuing qualities that individuals have in different amounts. Allport’s theory suggests that there are 3 main traits: central, secondary, and cardinal. A central trait is a characteristic that controls and organizes behavior in various situations. A secondary trait can be described as a preference and is specific to certain situations. A cardinal trait is very general and pervasive.

It is so pervasive that an individual is governed by it and it dictates everything a person does. The limitations to dispositional theories are that they describe people more than they strive to understand them. It is also confining to think of a personality being put into a box instead of being given room to grow and change as lives and experiences evolve. As an individual one does not like to think they are always to have the same personality or be the same for their entire lifetimes. One wants to learn, grow and change as they experience life instead of depending on the levels of body fluid they might have on a particular day. The strengths are that they helped develop objective personality tests that have become very common in personality assessment. Biological theories suggest genetics have a big part to play in personality. Some have suggested that people with high cortical arousal are introverts who avoid stimulation. While individuals with low cortical arousal are extroverts who look for stimulating experiences. These may be genetic.

One would think that biology does indeed play a part in personality; especially in younger years before life experiences alter one’s personality. This author has seen it in babies. One child leans strongly towards the father’s personality, more serious, organized, bossy, and controlling. The other child, although very close in age and with the same parents leans more towards the mother’s personality, carefree, messy, easily laughs, silly, and fun. They are too young to yet have life that has influenced how they behave, but naturally their personality mimics that of their different parents. This lends the belief that while biology may not dictate one’s personality for one’s entire life, certain traits can indeed be passed down through generations. The strengths of biological theories are that one may observe previous generations and make decisions based on the personalities of those before them, either copying success or avoiding pitfalls. The limitation is that one is not confined to be just like parents. One has the freedom of choice in how they conduct themselves and that can change one’s personality over time.

The Big Five Personality Test is a test that determines the strongest personality traits an individual possesses. There are 5 broad dimensions of personality used to describe an individual’s personality. The five factors are neuroticism, openness, conscientiousness, extraversion, and agreeableness. The test determines which factor is the highest, lowest, and the ones that fall in between. This author took the test, and in this time of life, found it to be fairly accurate. The highest score was agreeableness and that plays out regularly in everyday life. The Big Five Personality test helps one study personality over time because it gives a way for one to measure personality changes over time.

One can also see how traits relate to other variables such as confidence, music preferences, and more. One can also observe how different stages of life change which traits are dominant. Overall, dispositional and biological personality theories give one a lot of insight into personality, whether it is correct or not, it is a way to delve deeper into oneself to learn about motivations and behavior. Some theories seem a little crazy, such as type theories, and others make a little more sense and give insight into the behaviors of others and oneself. The personality test is the most interesting of all, giving yourself a glimpse into your personality and how it changes over time. 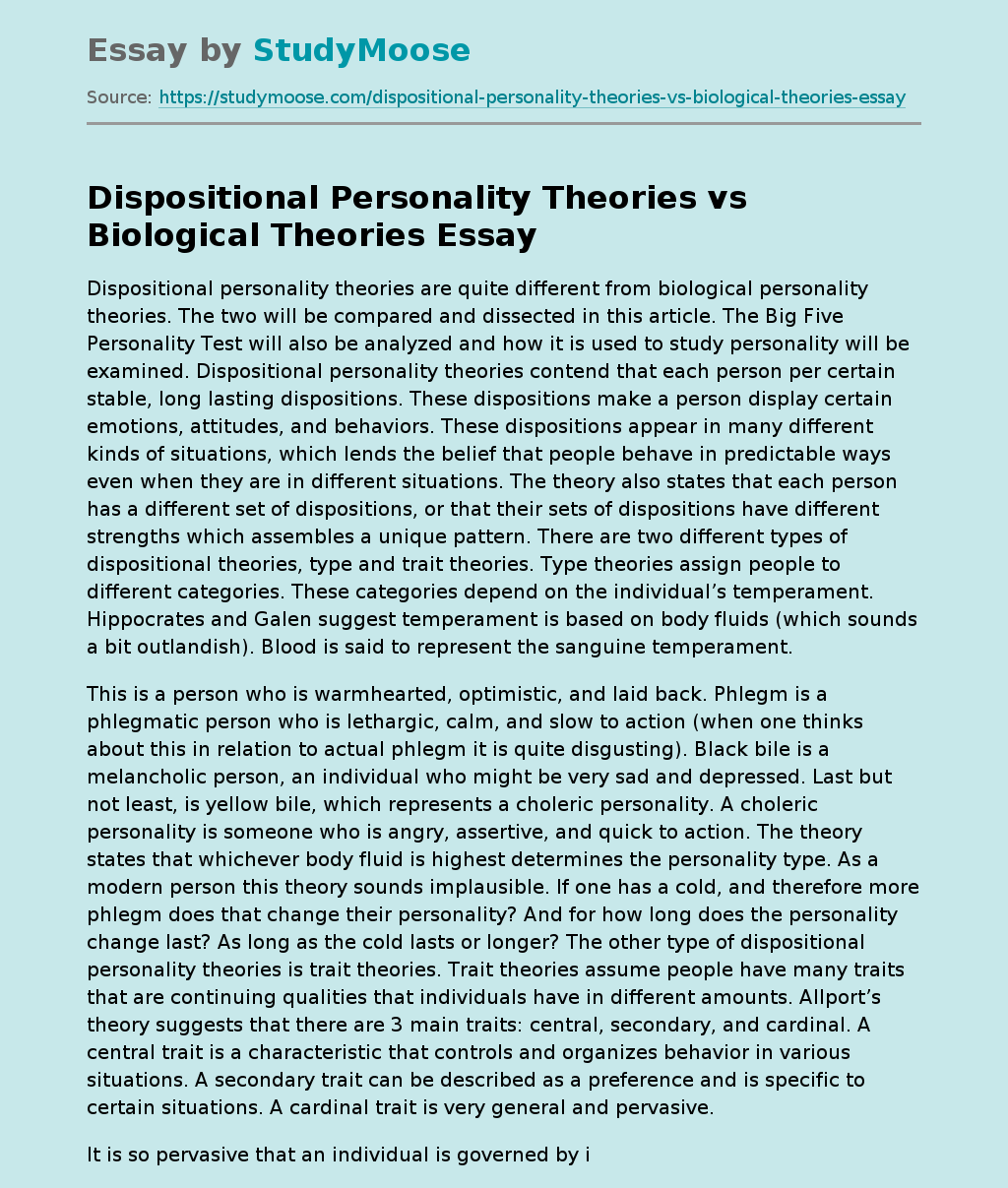