The management team of Disney did not better anticipate the cultural blunders of Disneyland Paris because they used their past theme park opening experience in California, Orlando and Tokyo as models to replicate. Unlike their past experience Euro Disneyland (now Disneyland Resort Paris) the first multicultural park. What Disney executives did not realize was that they need to better understand the European landscape. “We had to teach Europeans what a short stay resort destination is,” Pieter Boterman, company spokesman, explained. “There is nothing in Europe like Disneyland Paris, so there was no category in customers’ minds for what we were offering.

Don't use plagiarized sources. Get your custom essay on
“ Disneyland Paris ”
Get custom paper
NEW! smart matching with writer

On paper it may have been considered to be a well-planed opening, the team was meticulous about details in service and operations. They wanted to ensure their guests a seamless experience in the park.

However, from day one there were signs of disconnect with their costumers. The French president, François Mitterrand, did not show up for the opening event, stating that it wasn’t his “cup of tea.

” Fewer guests walked through the gates than expected, especially from France. Labor relations were strained, and some early service controversies became infamous and affected the resort’s reputation long after they had been resolved. For example, consistent with other Disney parks, Euro Disneyland did not serve alcohol when it first opened. This decision was ridiculed and scorned by European consumers. Soon after opening, Euro Disneyland started serving wine and beer, but the public did not forget the initial mistake.

Additionally, the Disneyland experience was not on pair with other parks.

The long queuing for the attractions was something that needed special attention. The original planning was based on “American queue length.” As it turned out, the same length of queue in Europe contained twice as many people as an American queue. Guests’ expectations regarding line wait times were, therefore, not met.

There was no such thing as “the European consumer.” Thanks to continuous research, the company now had detailed knowledge of each of its key European markets and became one of the key experts in understanding European travelers. The challenge was how to use this information to adapt to the different market segments without losing the core of Disney magic.

It was not until managers developed sophisticated knowledge about their guests in terms of spending habits, means of transportation, geographical distribution, preferred activities and competing destinations before addressing and attracting customer cultural differences could be met. 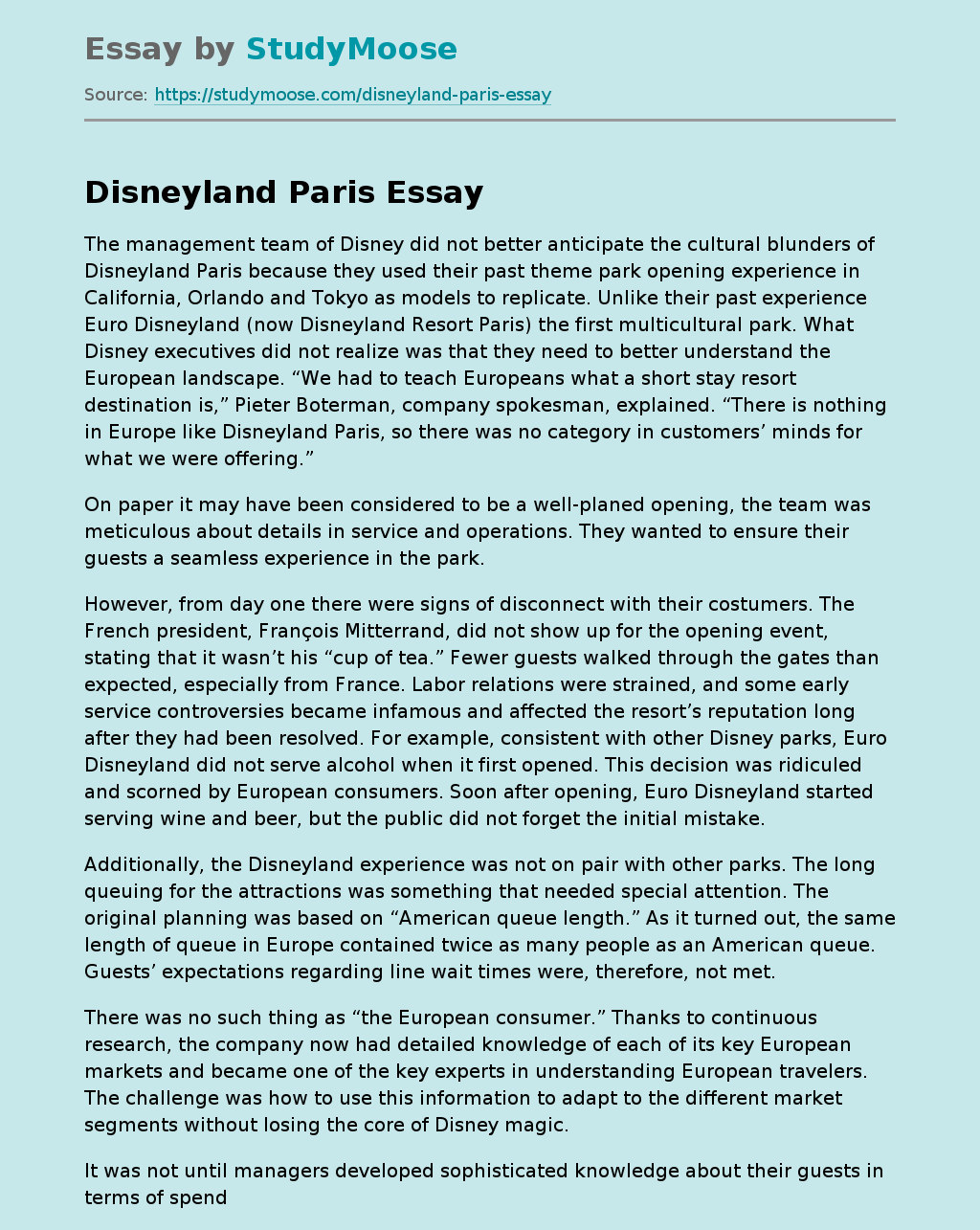