Discuss the presentation of Hell in Book One of Paradise Lost

Throughout Paradise Lost Hell is presented as a place, but also as a state of mind, which Satan refers to in his speech. Milton uses many opposites in Paradise Lost, contrasting Heaven with Hell, God with Satan, and good with evil.

Don't use plagiarized sources. Get your custom essay on
“ Discuss the presentation of Hell in Book One of Paradise Lost ”
Get custom paper
NEW! smart matching with writer

The contrast between light and dark exists in all of these opposites. The narrator characterizes the angels’ physical appearance as full of light, and the devils’ as shadowy and dark. Milton also uses light to symbolize God and God’s grace. The absence of light in Hell and in Satan himself represents the absence of God and his grace. The opening scenes reveal Hell as a fiery, glittering place that reflects the corrupt souls of the devils.

Milton establishes two opposing poles of evil and good, dark and light, and the action shifts to Earth, a region blessed by Heaven but vulnerable to the forces of Hell.

Milton’s first description of Hell is full of negative emotive words, ‘obdurate pride’ and ‘steadfast hate’ are adjectives used by Milton to describe Hell and the emotive words appeal to the readers emotions ‘dismal’, ‘waste’. ‘A dungeon horrible’ suggesting torture, suffering and punishment, which is Milton’s intention as he wants you to think of Hell like this, with a pictorial image produced by his use of language. Additionally the similes used by Milton to describe Satan also make us aware that we do not know the size of anything in Hell, for example not the burning lake, the hill, Pandemonium, or the fallen angels themselves.

Milton’s strange and self contradictory description of Hell in lines 50-83 acts as a contradiction which symbolizes the chaos of Hell. Milton also presents Hell through Satan and his speeches, the first reference Satan makes to Hell is when he contrasts it with Heaven, the ‘happy fields’ of Heaven and the ‘infernal world’ of Hell. Throughout Book One of Paradise Lost Hell is presented as a physical place but Satan also portrays it as a mental, psychological state.

Not only Hell but also Heaven are mental states to Satan: “The mind is its own place, and in itself / Can make a Heaven of Hell, a Hell of Heaven. This is a familiar psychological truth. It is know someone who retains self- confidence and serenity in spite of failure and bad luck, while others are never happy despite all kinds of advantages. Satan begins to emerge as a complex character. He has a rational understanding of his situation, for he certainly brought about his own Hell. He is apparently quite determined to think of it as his own personal Heaven. Although Satan and his fellow angels have been damned to Hell Satan maintains a positive attitude suggesting it is ‘better to reign in Hell’ which also enforces the image of Satan as classically heroic.

However when Satan states that ‘here at least/ we shall be free’ it suggests that Satan is in fact deluding Beelzebub and himself. Beelzebub is also used by Milton to present Hell, in his speech he tells of how Satan is affected by Hell. ‘Torrid clime/ Smote on him sore besides, vaulted with fire’ suggesting to the reader the Satan is painfully affected by the scorchingly hot climate under the fiery roof of Hell. Milton’s presentation of Hell in Paradise Lost Book One was largely affected by his own politics and religious believe Milton expressed his political ideals in the many pamphlets he wrote.

He believed that power corrupts human beings and distrusted anyone who could claim power over anyone else. Milton believed that rulers should have to prove their right to lead other people. Milton despised the corruption he saw in the Catholic Church, repeatedly attacking it in his poetry and prose and Milton’s individual view of Christianity makes Paradise Lost simultaneously personal and universal. These are significant factors which contribute to Milton’s overall presentation of Hell.

Discuss the presentation of Hell in Book One of Paradise Lost. (2020, Jun 01). Retrieved from http://studymoose.com/discuss-presentation-hell-book-one-paradise-lost-new-essay 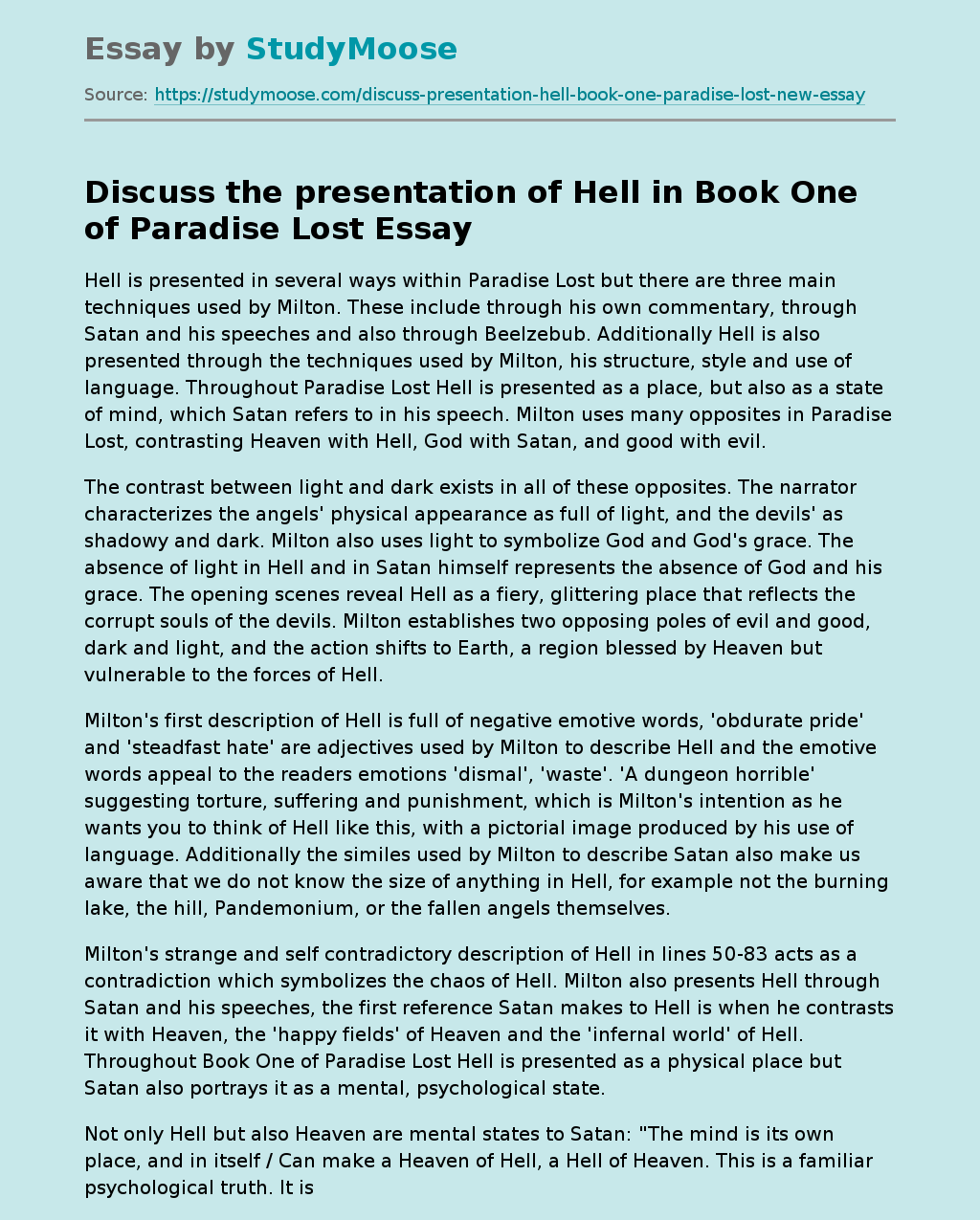