‘It is a truth acknowledged, that a man in possession of a good fortune, must be in want of a wife’

This quote not only opens the novel, but also sets the tone of the narrative story. It says that a man in possession of money and being an eligible bachelor would have every spinster in the neighbourhood wanting to be his wife

In the nineteenth century women were below men in status. Men owned everything. After the death of the master of the house all his possessions were given to the next male relative.

In the novel as there were only five daughters Jane, Elizabeth, Kitty, Mary and Lydia and no males in the immediate family, so their mother, Mrs. Bennet, as she is called in the novel is determined to get her daughters married as soon as possible.

When the Bennet family received the letter from Mr.Collins, which included the words,

‘.. Assure you of my readiness to make them every possible amends, but of this hereafter’

this shows that Mr.

Collins was hinting that he is looking for a wife. When Mrs. Bennet read this she was pleased at the news. When the daughters heard of his visit, they were not as pleased as their mother,

‘ He must be an oddity… I cannot make him out… The is something very pompous in his style.’

They also added that in his letter there was a mixture of servility and self-importance. Elizabeth was stuck with his extraordinary deference to Lady Catherine de Bourgh, his patroness.

Mr.Collins visited the family with the sole purpose of finding a wife, in his letter he states,

‘ I feel it my duty to promote and establish the blessing of peace in all families..’

this is just an excuse to come to Longbourn because he really wanted to ‘admire’ the girls and propose to one of them. Mr.Collins didn’t really want to get married, it was actually his patroness; Lady Catherine de Bourgh who had recommend, advised or rather orders him to marry and wished to comply with her wishes.

When Mr.Collins arrived, out of all the sisters only Mary thought anything of him but everyone else found faults in him. Mrs.Bennet also had the same opinions as her daughter, she knew he would be a suitable husband for one of her daughters because he knew Lady Catherine and lived near her.

D he wished to propose to the eldest daughter, Jane, but soon found out she was to be engaged to Mr.Bingly. Mr.Collins had only to change from Jane to Elizabeth and it was,

‘Done while Mrs.Bennet was stirring the fire’

Mr.Collins obviously didn’t have true feelings towards Jane or Elizabeth, since he was able to change his mind so quickly. He obviously only wanted to please his patroness.

Elizabeth was very intelligent, independent and her interests in many different things like reading, playing the piano, singing, needlework and dancing. She believed marriage had to have an element of love and not just wealth like her mother believed. When Mr.Collins proposed to her, as a reader we knew that she had an independent mind.

In the proposal, Mr.Collins made it quite obvious that the proposal was more of a business transaction and he asked for a chance to speak with Elizabeth,

‘May I hope, madam, for your interest with your fair Elizabeth, when I solicit for a private audience with her..’

before Elizabeth could even blush with surprise, Mrs.Bennet instantly answered. Elizabeth begged her mother not to go, but Mrs.Bennet obviously knew what Mr.Collins had in mind and insisted that she stayed with Mr.Collins. At this time Mr.Collins really thought she was being shy and modest tried to add it to a compliant,

‘.. your modesty, so far from doing disservice, rather adds to your perfections.’

Elizabeth would have had a clear idea that he was about to propose to her. Mr.Collins started off staying,

‘Almost as soon as I entered the house, I singled you out as the companion of my future life.’

This was not true to the reader, as the truth is that he was going to propose to the eldest daughter, Miss Jane Bennet, but when he heard the news of her engagement he changed to Elizabeth.

Mr.Collins then came out with his first reason for his proposal,

‘…first that I think it a right thing for every clergyman in easy circumstances (like myself) to set the example of matrimony in the parish;’

This shows he obviously wants to marry her to set a good example to his parish, it also this shows her doesn’t care about her, but what Lady Catherine de Bourgh wishes and his reputation. He then states,

‘..secondly, that I am convinced it will add very greatly to my happiness;..’

Once again he is showing that he thinks marriage will bring him happiness, he has no idea that marriage is suppose to be about being in love, trust, companionship and getting to know each other beforehand.

‘.. and thirdly-which perhaps I ought to have mentioned earlier, that it is the particular advice and recommendation of the very noble lady whom I have the honour of calling patroness.’

This is actually the only true reason that he wants to marry her, to please Lady Catherine de Bourgh. Mr.Collins is frightened of not complying with her wishes. He sees her suggestion as an order or a command and he would never disobey her because he is very aware of her superior rank in the society, this shows him to be cowardly, weak and rather silly man who can be easily intimidated. He wants Elizabeth to see Lady Catherine’s advice and recommendation as her wanting to see Mr.Collins happy, settled down and to carry on working for her.

He then went on and tried to compliment Elizabeth and make her see that Lady Catherine will welcome her into her estate. In his reasons for the proposal he had no references to Elizabeth’s happiness which showed how self-centred he really was. The connection that she could have with Lady Catherine and show she could boast about knowing a person of high status, was the real reason that he could give her for accepting the proposal. This showed how little he knew about Elizabeth’s personality, as this reason would not have meant anything to her. Elizabeth would bot feel inferior to people of higher rank in society.

Mr.Collins then went on about how she would have pressure to wed when she gets to her late twenties,

‘ As I am to inherit this estate after the death of your honoured (who, however may live for many years), I could not satisfy myself without resolving to chuse a wife among his daughters, that the loss to them might be as little as possible.’

This comment was to persuade Elizabeth’s decision and make her feel guilty if she was to refuse his proposal, because her unmarried sisters and mother would have nothing if they were made to move out of their home. He was certain she would accept his proposal when he used his persuasive comment because he thought himself was a worthy choice, that he was already making plans for their married life,

‘you may assure yourself that no ungenerous reproach shall ever pass my lips when we are married.’

Elizabeth found it necessary to interrupt him by telling him that she hasn’t given him an answer and politely. Mr.Collins being so full of self-importance saw he refusal as a way to make him more passionate,

‘It is usual with young ladies to reject the address of the man whom they secretly mean to accept.’

Elizabeth was not that type of girl to lead a man on or to keep him waiting and stated she was not the girl who would have been foolish enough to risk her future happiness on the chance of being asked again by someone she truly loved and Mr.Collins failed to see that,

‘I cannot therefore by no means discouraged by what you have just said, and shall hope to lead you to the altar ere long.’

Elizabeth tried to make it even clearer, without being rude and even added that Lady Catherine would not approve of her independent mind and he would not want to upset his patroness by choosing an inappropriate partner. Even when Elizabeth gives him these reasons for refusal he still continues,

The reader will know that he has once again mis-judged her character. Later on in the novel Elizabeth and Lady Catherine are introduced to each other. Lady Catherine clearly despises Elizabeth’s outspoken manner and lack of awe.

Elizabeth, getting annoyed by the lack by his persistence still behaved as a young lady and had to remain polite and assure him that he could only leave Longbourn feeling he has done his duty.

‘In making me the offer, you must satisfied the delicacy of your feelings with regard to my family.’

She then went to leave the room, thinking he had finally understood her, but Mr.Collins was persistent and had not understand why she refused such a great and wonderful proposal, as he thought himself eligible and worthy husband. He tried once again to change her mind,

‘My situation in life, my connection with the family of de Bourgh and my relationship to your own, are circumstances of high favour’.

Mr.Collins the greatly insulted her, as she was just to leave the room,

‘it is by no means certain, that another offer of marriage may be ever be made to you’

, but as a reader we know that that is certainly not true. 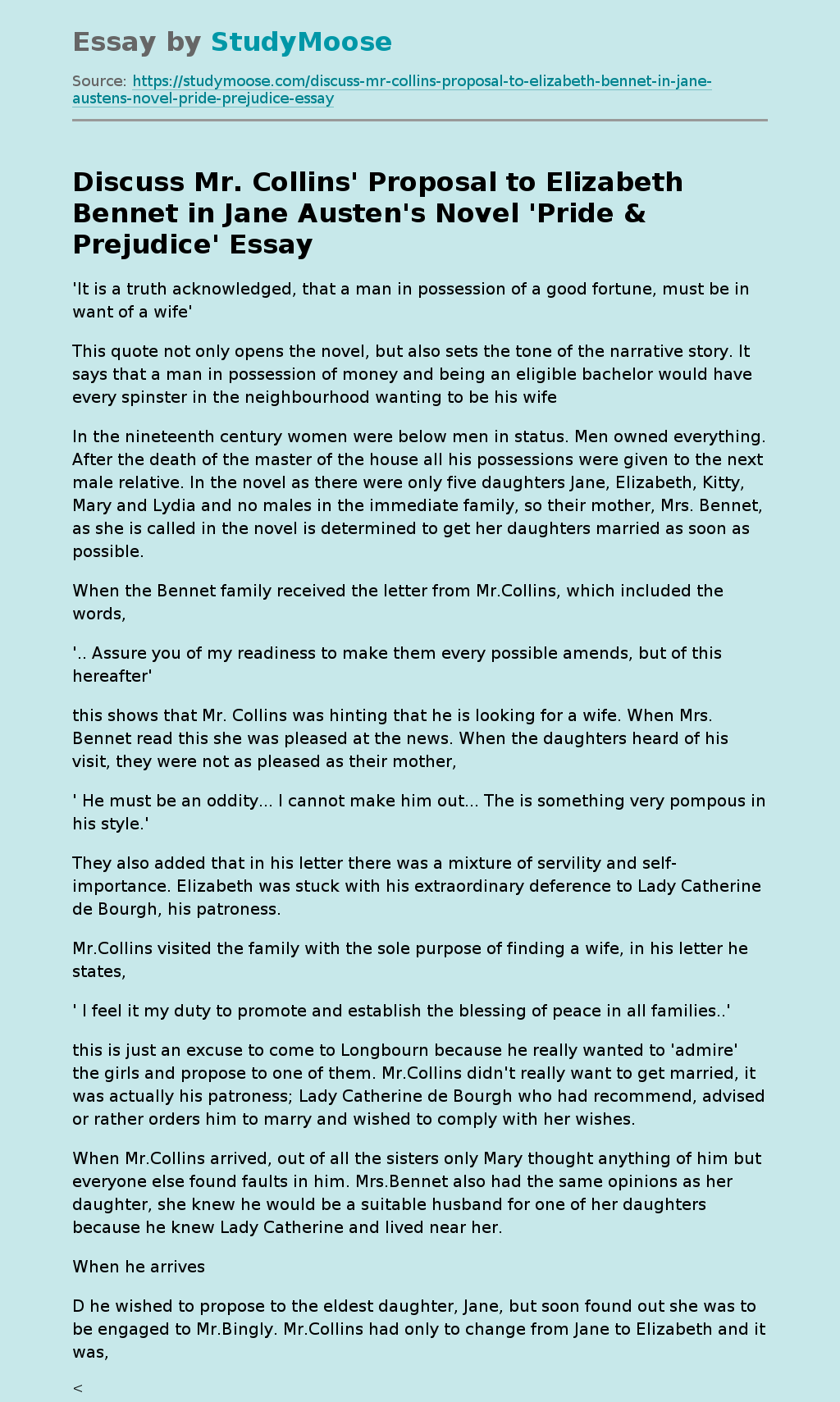