Discuss the flood issues in Bangladesh

The river Ganges was swollen by monsoon rains from June to October and from tropical cyclones, which drove onshore into Bangladesh after crossing the Bay of Bengal.

Bangladesh suffer from flooding almost every year. The floodwaters bring with them fertile sediment, which makes the delta and flood plains ideal for farming. But when the flooding is severe as in 1998-it causes loss of life and brings great suffering to the population.

For much of the year the climate is very hot in this country.

Don't use plagiarized sources. Get your custom essay on
“ Discuss the flood issues in Bangladesh ”
Get custom paper
NEW! smart matching with writer

Often there is not much rain to make crops grow and then people may not have enough to eat. Bangladesh’s main sources are the Himalayas.

The Ganges River flows down from the Himalayas. Before it reaches the sea, it divides into several branches. One branch is joined by a long river, called the Brahmaputra. The rivers flow into the Bay of Bengal.

Rice is one of the main crops grown in this region. Many people in this region eat rice as their main food, usually mixed with a few vegetables.

The rice is planted by the hand in shallow watery beds called rice fields. After about six months the rice is ready to be picked by hand.

Calcutta is one of the most over crowded cities in the world. Disease and hunger are common in the slums, which are known as bustees. But there are also many fine houses in the centre of Calcutta. Nearby there is a large park, called the Maidan, where cows graze and cricket is played.

The Himalayas form a barrier that separates northern India from the plateau of Tibet, in China.

Human Causes of the floods.

The sources of the Ganges and Bramputra rivers are in the Nepal and Tibet.

In recent years the population there have grown rapidly, causing the removal of vast areas of forest to provide fuel, timber and grazing land.

In Nepal, 50% of the forest cover that existed in the 1950s has been cut down. The forests absorb water from the ground, bind the soil particles and reduce the impact of rain droplets on the ground surface.

The removal of forest cover has increased soil erosion and overland flow. The soil is deposited in the river channels causing the raising of the riverbeds and reducing the capacity of the rivers.

It has been estimated that the river of the Brahmaputra is rising by 5cm each year. The building of the Farakka dam in India in 1971 is blamed for raising the riverbed of the Hooghly River, a tributary of the Ganges. This increases the risk of flooding.

Urbanisation created obstacles to free flow of water, and flood defences such as embankments.

Physical causes of the floods.

Most of the country is the huge flood plain and delta of the Ganges and Brahmaputra.

70% of the total area is less than 1 metre above sea level.

Rivers, lakes and swamps cover 10% of the land area.

The snow melts in the Himalayas in late spring and summer.

Heavy monsoon rain falls especially over the uplands, including the Himalayas.

* In Assam in the Northeast more than 1 million people lost their homes.

* Over 1000 people were killed and millions were made homeless.

* There were shortages of drinking water.

* Diseases such as bronchitis and diarrhoea spread.

* In the Nalbari district, 240 villages were submerged.

* As the waters drained away, brown fields of rotting crops, villages buried in sand and silt, and wrecked roads and bridges, were left behind.

Flooding is a normal occurrence in the lower course of a river, and is why a river creates a flood plain.

A flood occurs when the water in a river overtops its banks and leaves the channel. Most floods occur because of the weather.

After a rainstorm, the discharge of a river usually increases. However, two drainage basins may react very differently to a rainstorm producing identical amounts of rainfall.

You can also get a ‘flashy’ river, this means that it can rise very quickly after a rainfall event and also fall equally fast following a dry spell.

Bangladesh cannot solve the flooding problem itself. An international approach is needed to tackle deforestation, dam building, and global warming.

In July 1987 the World Bank prepared an action plan for flood control. The plan involves the completion of 3500km of embankments to include compartments for floodwater storage.

2. 12-15 floodwater diverted from the main rivers.

3. Pumping water out of the ground in the Himalayas during the dry season to create underground storage for the monsoon rains.

4. Replanting of forest cover in the Nepal and Tibet.

The governments of the other countries also gave aid, including millions of tonnes of wheat and money for medicines, water tablets, house repair, and sanitation and for rehabilitation of farming and fishing.

Discuss the flood issues in Bangladesh. (2020, Jun 01). Retrieved from http://studymoose.com/discuss-flood-issues-bangladesh-new-essay 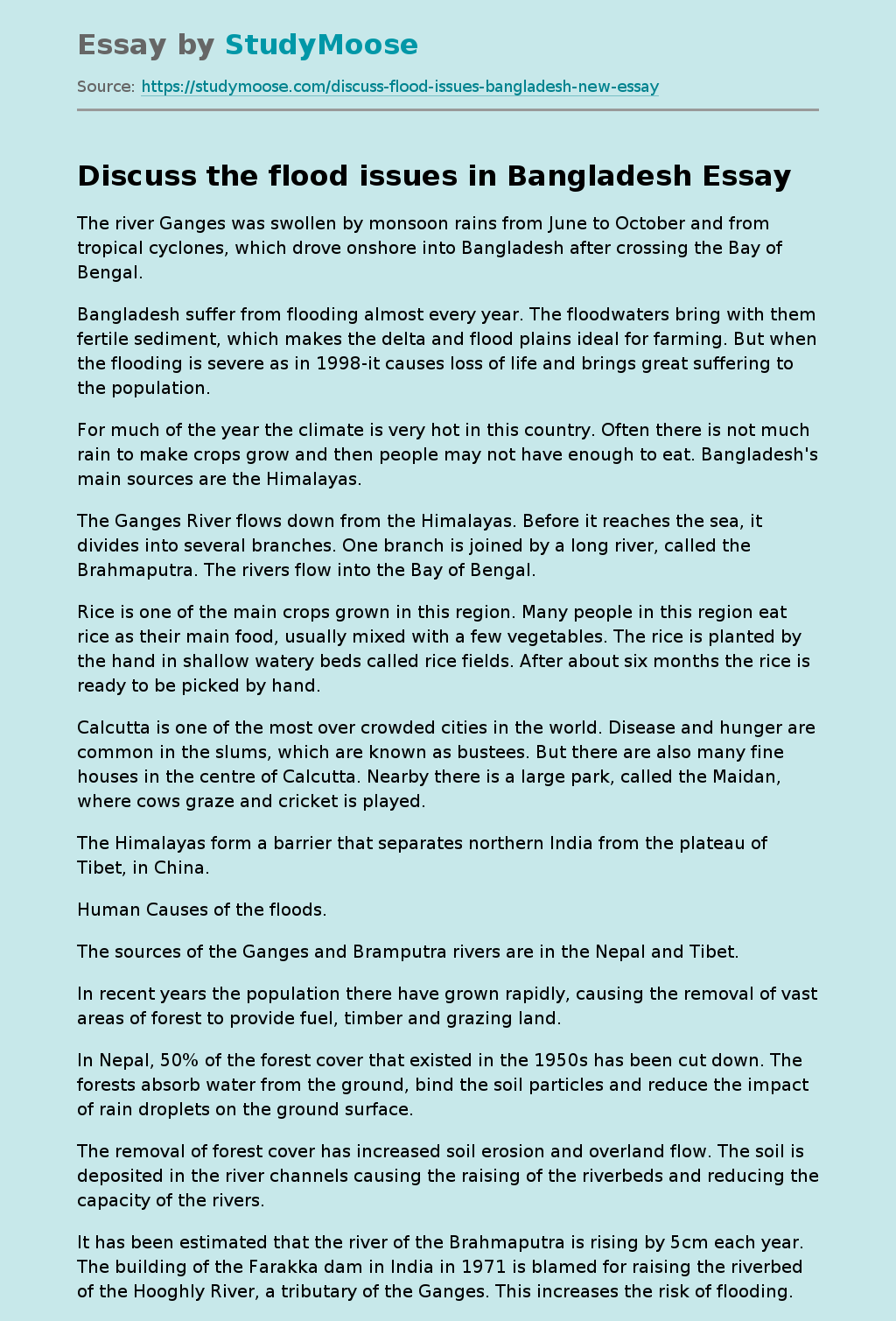