Some psychologists say that schizophrenia can be passed down generations, meaning that some people inherit the disorder from their parents.

Don't use plagiarized sources. Get your custom essay on
“ Discuss Biological Explanations of Schizophrenia ”
Get custom paper
NEW! smart matching with writer

This research shows that there is a definite correlation between genetics and the risk of developing schizophrenia.

However, no twin research has found a 100% concordance rate; therefore it is impossible the say that genes definitely cause schizophrenia, as other factors clearly have an influence.

Also, some psychologists argue that the high concordance rates found could be caused by being brought up in a family with a schizophrenic, so the child mimics the schizophrenic behaviour, rather than by genetics.

Evaluation of the Dopamine Hypothesis

Autopsies have found an unusually high number of dopamine receptors in the brain of schizophrenics (Owen et al, 1987), however, this evidence is varied and inconclusive.

Grilly (2002) found that patients who suffered from Parkinson’s and took the drug L-dopa, which increases dopamine levels, showed signs of schizophrenic symptoms. This suggests the increase in dopamine could result in schizophrenia.

Problems with this explanation

There are problems of the dopamine hypothesis. One is that antipsychotic drugs, which block dopamine receptor don’t always help patients. This suggests something else must cause schizophrenia as well; otherwise the drugs would help all the patients.

Using brain imaging techniques, such as P.E.T scans, researchers have found many schizophrenics have enlarged ventricles, on average 15% larger than normal. Some psychologists believe that the increase in the size of these ventricles is what leads to the schizophrenic symptoms.

The brain imaging scans support this explanation in itself, it’s clear that a lot of schizophrenics have different brain structures to normal people, so there must be some correlation between the two.

Research by Meyer-Lindenberg (2002) found that reduced activity of the prefrontal cortex is linked to dopamine abnormalities. This could provide an
explanation of why brain dysfunction could cause schizophrenia, not show a correlation.

Some researchers suggest that brain abnormalities that lead to schizophrenia could be caused by viral infection. For example, contracting diseases such as Flu or Syphilis in the womb may relate to developing schizophrenia in later life

Torrey (2000) found that more schizophrenics are born in the winter, when it is cold and exposure to viruses is higher, than in other months. Although this link is only correlational it suggests viruses do affect the chance of developing schizophrenia 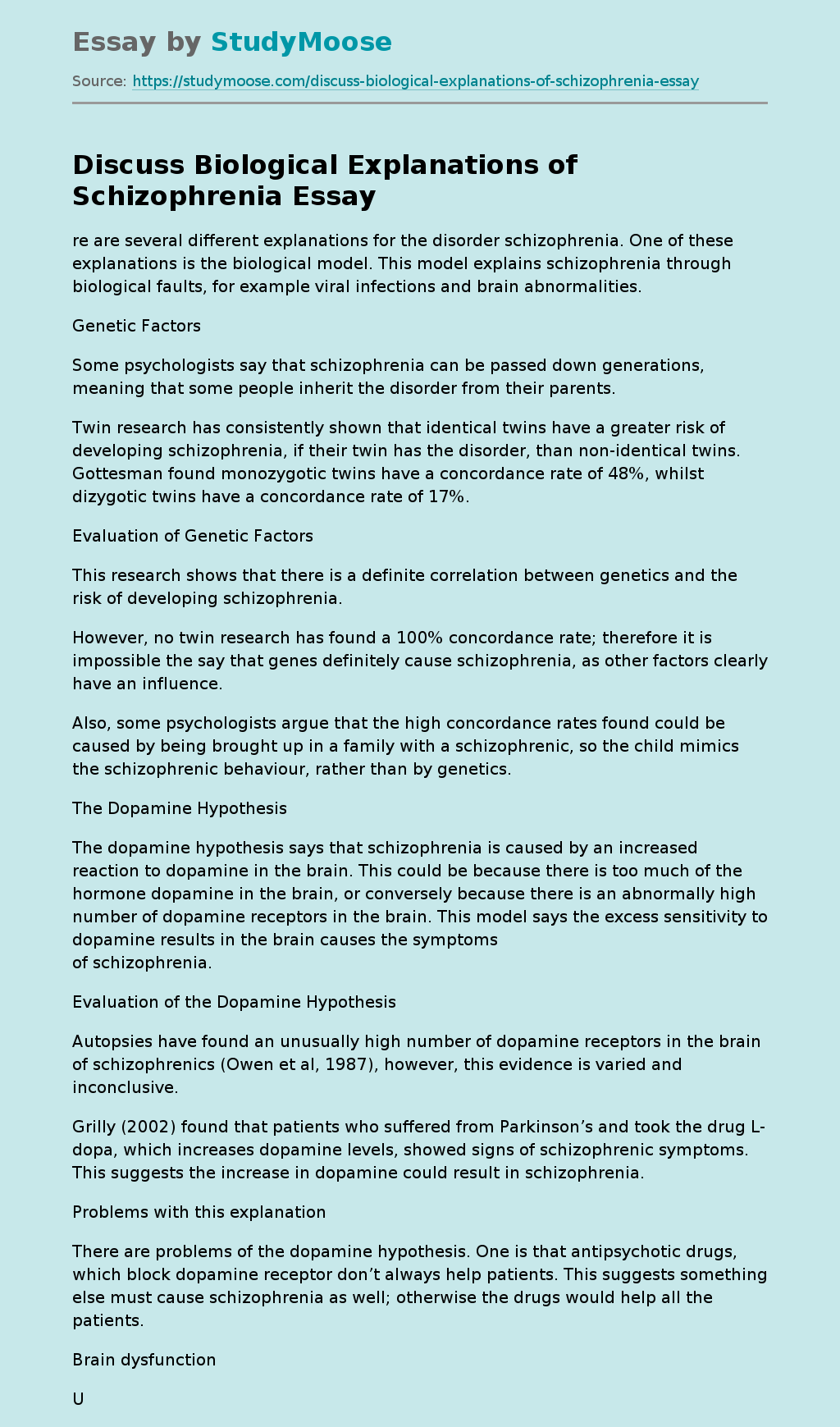