Discuss the appeal of 'The Crucible' to its audience

The use of archaic lexis by characters in their dialogue is another manner in which Miller endeavours to create a 17th century environment. As Act One terminates, Betty (the young girl who fell ill as the play commenced) immediately accuses neighbourhood citizens of dancing with the Devil after she has woken from her slumber: I saw George Jacobs with the Devil! I saw Goody Howe with the Devil! (Act One p39) The word ‘Goody’ used in her speech translates to ‘the wife of Mr Howe’ or ‘Goodwife’.

Don't use plagiarized sources. Get your custom essay on
“ Discuss the appeal of ‘The Crucible’ to its audience ”
Get custom paper
NEW! smart matching with writer

This applies for other characters e. g.

In the modern society we would use the correct terminology of ‘Mrs Howe’. Another frequently used archaism in the play is ‘Aye’. It is a word that translates to ‘Yes’ or ‘of course’ in modern English: Aye, sir. I pray for her (Act One p7), were Susanna’s words as Betty’s illness is said to be unnatural by Doctor Griggs. The syntax of characters in the play is slightly different to a person speaking today: And what shall I say to them? That my daughter and my niece I discovered dancing like heathen in the forest? (Act One p7)

This archaic arrangement of words distributed by Parris again emphasises the play’s realistic setting which the audience thinks is authentic and makes them feel in the relevant background suited to the time period of the play.

As the play holds such a tense, boisterous and dramatic atmosphere, this itself would keep the audience attentive and drawn to the stage.

The persecution of various wives in the village over allegations of witchcraft holds a clamorous atmosphere, in contrast to the muted tone of the interrogation of the innocent in court (over accusations of casting spells with the Devil).

This may intimidate the attendees but also grips them as they sense a climax to the scene. The curtain falling leaves the audience with an anticlimax but eagerly anticipating the scene to follow. Miller uses characterisation in the play to affect the appearance and personality of a character. This may appeal to the audience as the individuals on stage seem more stereotypical but also add realism to the play. The girls in the play are valets and specialized in domestic drudgery, for example Mary Warren was John Proctor’s servant. This would be common in the 17th and 18th century.

The men would work constantly, perhaps at a farm, to fund a living for their families whilst their wives (or servants) were given housekeeping duties. These would be typical roles for men and women in the period that ‘The Crucible’ was set and maintains the realism expressed. Miller also adds imperfections to their characters so they seem like mundane mortals who have flaws, like John Proctor and his affair with Abigail. The audience viewing may be enthralled by this affair in such a dense society and wonder how none of the villagers knew about this. Proctor shows that like all human beings, he has an aggressive side:

Here, Proctor is implying that if Mary does not produce a consistent level of work, he will punish her with a whipping on her ‘arse’. This particular scene may seem to female members of the audience as unfair degradation of women, and that a beautiful young woman should not be treated in the derogatory manner by men such as John Proctor, who should be a caring family man.

The audience may feel that Proctor may be acting with unnecessary aggression towards Mary, and should show more respect to a young lady. As the dialogue proceeds, Proctor talks to Abigail about their affair, when Abigail expresses her thoughts on Elizabeth :

As John is now in a slightly unpleasant mood, he threatens Abigail with a whipping if she continues to discriminate against his wife.

The audience may feel a wave of sympathy towards Abigail as she is being threatened by an elder, stronger man. When the subject of witchcraft surrounds the village, the dangers of prejudice and discrimination appear. As numerous people are accused of enchantment, the news spreads through the village and people become conscious of each other. The inhabitants feel they are in a society full of inhuman, unnatural individuals. Discrimination of people and prejudice is very dangerous as it can severely affect morale and normal citizens become hypocritical.

‘The Crucible’ would appeal to an audience of its time because the 1950s audience would clearly recognise it as an echo of life in America at the time, and would be attracted to see how it was expressed. Miller uses the story of the Salem Witch Trials to mirror 1950’s American society where Joseph McCarthy – a senator – was the chairman of an organisation called the House of Un-American Activities which had the power to interrogate any movement or people that threatened the safety of the state, or anyone who was a communist sympathiser.

If anyone was suspected of criticising the government or the way it ruled, they were seen as having an adherence to communism. Bystanders were forced to answer charges that they were communists, and perhaps more imperatively, to give names of anyone who they had seen at meetings or discussions many years before. This is mirrored in the play when John Proctor is asked to name other guilty of witchcraft but refuses and is consequently, and unfairly, hanged. Witchcraft threatened the moral purity of the Salem community. It threatened to taint the souls of Salem residents. It was a scourge that had to be wiped out.

Souls had to be scrubbed clean in the rigorous court sessions. The Red Scare described Communism in the same way. It was a scourge that threatened the very way of American life. Any American citizen who failed to conform to the “healthy American” standards was already considered contaminated. The power to control the lives and speech of numerous people was a seductive power. The concept of a “private life” would have sounded heretical to the citizens of Salem in 1692. The government is a theocracy, the legal system based on the Christian bible. Moral laws and state laws were one and the same.

Moral sin was a public concern. The status of the individual’s soul was a public concern. An individual’s private life had to conform to the moral laws, or the individual represented a threat to the moral public good. Individuals could be charged with moral sins and punished for them by the legal system. The philosophical meaning to this play was that each individual’s welfare within the society was treated with great interest from every other member of the society, and that they were punished fairly, according to moral laws, and were executed if others felt they represented a threat to the community, like witches.

The American society in 1950s was afraid of communism. The public would ostracize a communist, which is linked to Salem because their society was afraid of witchcraft and this shows that both communities were concerned about the welfare of their state. Both societies were determined to act harshly on individuals who were not acting as their government expected them to, such as involvement in witchery. Though the play itself has very few examples of symbolism beyond typical witchcraft symbols (rats, toads, and bats), the entire play is meant to be symbolic, with its witch trials standing in for the anti-Communist “witch-hunts” of the 1950s.

Miller’s appeal for an audience of his time would be related to the controversial message that McCarthyism was unfair prosecution of the innocent. An audience in today’ society would be interested in historical events such as witchcraft, as they may be enthralled to find out how people lived in the late 17th century in America. The society and cultural changes that have taken place since this time period have transformed people’s lives drastically. This may attract an audience who are interested in these changes, such as punishment and general welfare.

Discuss the appeal of 'The Crucible' to its audience. (2020, Jun 02). Retrieved from https://studymoose.com/discuss-appeal-crucible-audience-6531-new-essay 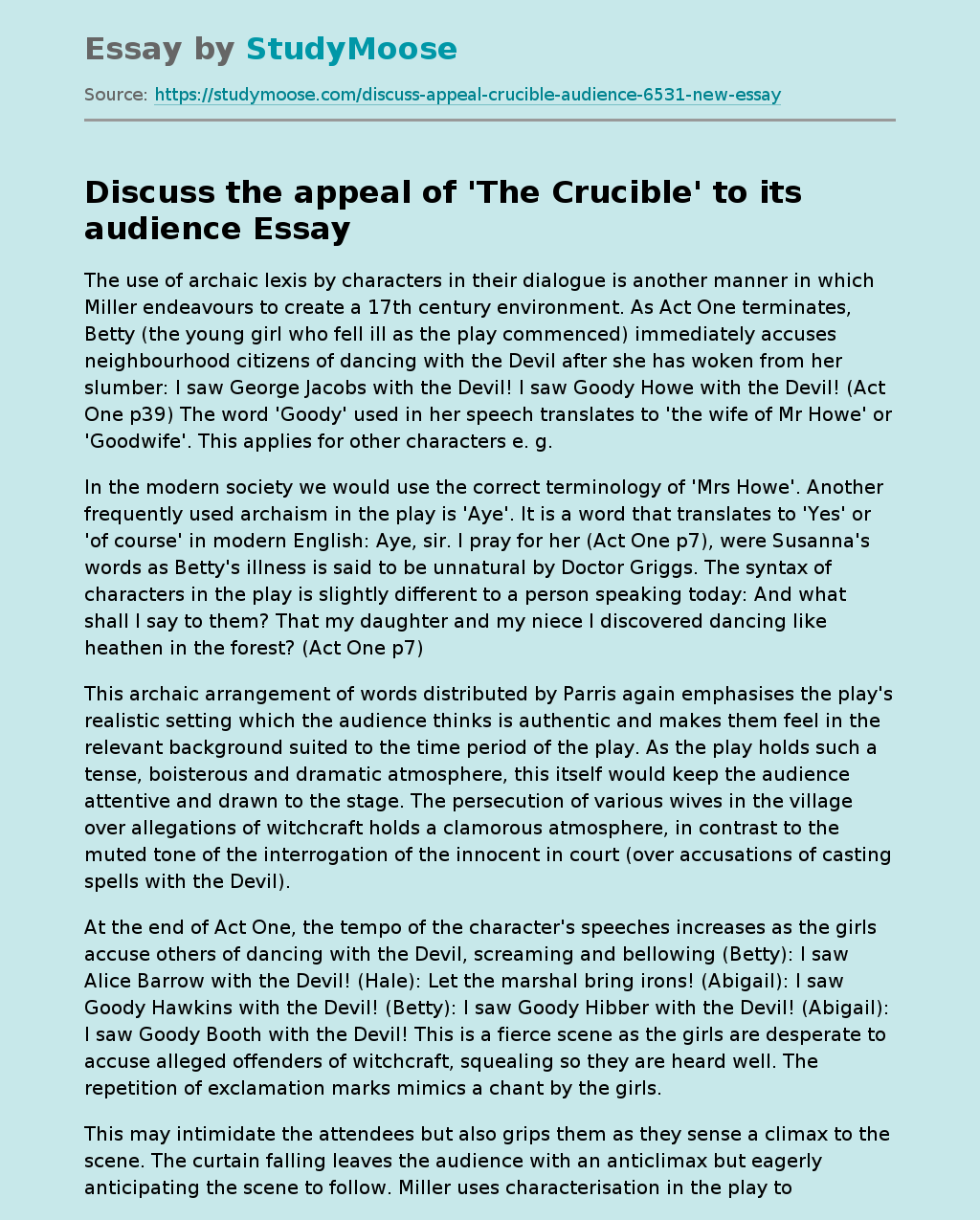