Infringement of rights: not respecting an individual’s rights and not letting them practice their culture. This can lead to individuals feeling devalued and very sad, which will affect their health. An example of this say for instance in a care home it was Eid and they was not allowed to celebrate it however all the other occasions were allowed, this would make an individual feel devalued and as if their needs or wants aren’t important, like their culture isn’t important this could lead to health problems as what they enjoy in their culture has been excluded and taken away from them.

Don't use plagiarized sources.
Get Your Custom Essay on Discriminatory Practice Just from $13,9/Page

Covert use of power: hidden use of power to discriminate. This can lead health and social care professionals to treat someone differently from someone else. This means that a person may not get that same level of treatment, which may jeopardise their health and well-being. One example would be when people apply for job. Although one person may have the same experience and qualification as the other applicants they may not be shortlisted because of their skin colour, or sexuality etc.

it’s harder to prove that covert discrimination is occurring but cases are regularly reported and is still happens. In a health and social care professional setting a health care worker may not give somebody the right medication at the right time, maybe due to the colour of their skin colour or their sexuality which they strongly feel opposed to. Overt use of power: openly using power to discriminate.

This will have similar outcomes to covert abuse of power. However, if a person being treated notices that they are being discriminated against, it will have a negative impact on their recovery, their mental health issue to depression and it could make a negative impact on their recovery as they may worry about what they have even done in the first place to be getting this treatment. An example of over abuse of power could be if a health care worker tells a person they are too fat to live their 50s. Another example when a colleague is paid more than you, because of their gender, even though you are doing the same job with the same qualifications. It can also be found in the different treatment one person receives compared with another when there should be no difference at all. Prejudice: is prejudgment, or forming an opinion before becoming aware of the relevant facts of a case. The word is often used to refer to preconceived, cynical ideas about another individual, arising from a person’s negative ideas about that person, usually unfavourable, judgments toward people or a person because of gender, political opinion, social class, age, disability, religion, sexuality, race/ethnicity, language, nationality or other personal characteristics.

For example, more than 700 people with a diagnosis of schizophrenia in 27 different countries were interviewed as part of International Study of Discrimination and Stigma Outcomes, 72 per cent of those interviewed said they felt the need to conceal their diagnosis. 64 per cent said the anticipation of discrimination stopped them applying for work, training or education programs and 55 per cent said it stopped them looking for a close relationship. In the health and social care sector could be care worker telling another care worker that he or she does not want to work with someone or get them over and done with as they don’t like them due to whatever reason may be. Stereotyping: assumptions made about an individual judged on their group, environment and it may not always be true and sometimes it is based on another persons or groups qualities and life, this is dangerous as it could make the service user feel depressed and mess them up mentally due to the ‘name calling’. For example, it may be a stereotype that Asian people love to eat rice. So according to this stereotype, if you are Asian, that automatically means that you will unconditionally love to eat rice. This can already show that generalizations made from stereotypes are not the most reliable to base your judgement on.

Typically racial and ethnic group stereotypes come from some degree of prejudice thought. In a health and social care area this may occur when a health care worker sees a dark skinned black man and instantly think he is a thug so they chose not to assist them and move them on to someone else. Labelling: Labelling people refers to a form of prejudice and discrimination where a person allocates names to people on the basis of nationality, religion, ethnicity, gender, or some other group. Labelling of people represents a way of differentiating and identifying people. This practice is normally conducted on minority groups. For example, if you label someone who is wearing black as a Goth, you will assume them to be a depressing and dark-minded person, when in fact they might not be at all. This can lead to prejudice and discrimination. Labelling is basically a combination of all the other three things you have listed in your question, and is the ultimate form of ignorance and assumption. In the health and social care profession you need to be aware of this tendency to label people. Labelling thoughts may come into your head and everyone has these types of thoughts but it’s what you do with them that are important.

By becoming aware of your labelling thoughts, you can control them and stop them interfering with your work. Another example in the health and social setting is if a care worker was having a conversation with another care worker and referring a service user as the ‘bimbo’ just because of the colour of their hair such as blond this would be labelling and it would distress the user. Bullying: Bullying is a persistent attempt to hurt or humiliate someone, it is a repeated action and deliberately hurtful. The person bullying is more powerful than the person bullied, making it hard for those being bullied to defend them. Bullying can occur in many different forms. It can be physical (hitting, pushing, and damaging others’ property); it can be verbal (name-calling, threats) or social (excluding someone, spreading rumours). Bullying is not only between children and not only in schools; can it happen at home, in organisations, at work or on the Internet. Bullying is often based on perceived differences, such as ethnicity, sex or disability, so young LGBT people evidently have a higher risk of being bullied.

In a health care sector a health care worker may tell a service user that they needs to stop eating as they are already too fat. Abuse: Abuse is the improper usage or treatment of an entity, often to unfairly or improperly gain benefit. Abuse can come in many forms, such as: physical or verbal maltreatment, injury, assault, violation, rape, unjust practices; crimes, or other types of aggression. Abuse of authority, in the form of political corruption, is the use of legislated or otherwise authorized powers by government officials for illegitimate private gain. Misuse of government power for other purposes, such as repression of political opponents and general police brutality, is not considered political corruption. Neither are illegal acts by private persons or corporations not directly involved with the government. An illegal act by an officeholder constitutes political corruption only if the act is directly related to their official duties. Abuse of authority is separated from abuse of power in that the act is originally condoned, but is extended beyond that initially conceived and is in not all cases.

Discriminatory Practice. (2016, May 08). Retrieved from https://studymoose.com/discriminatory-practice-essay 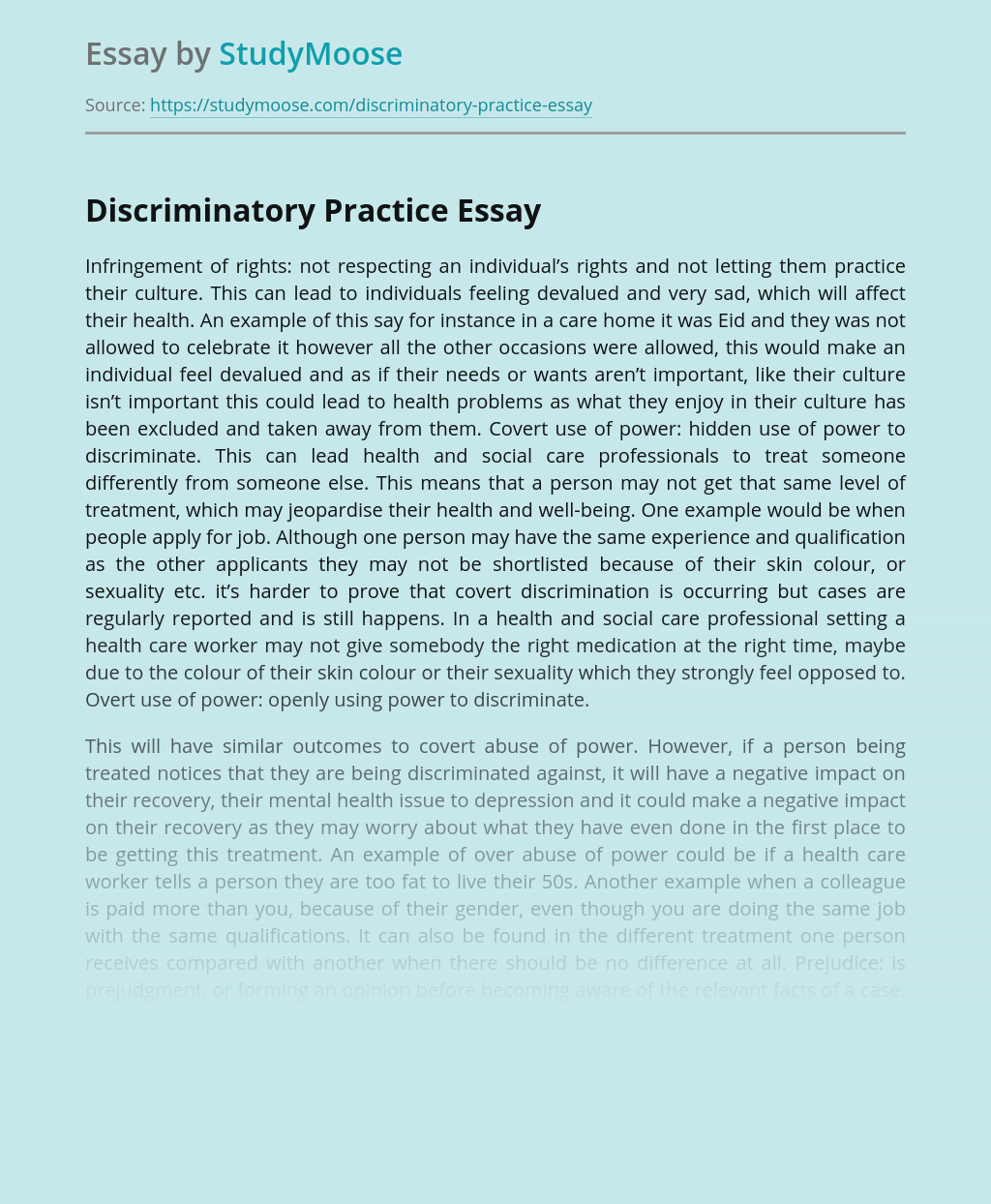 All rights reserved. No part of this publication may be reproduced or transmitted in any form or by any means, electronic or mechanical, including photocopy, recording, or any information storage and retrieval system, without permission in writing from the publisher. Design and typesetting by SCRE Information Services. Being bullied is a frightening experience. No-one likes...

3.3.3- Evaluate ways in which concerns about poor practice can be reported whilst ensuring that whistle-blowers and those whose practice or behaviour is being questioned are protected. Any person who wants to work with children has to go through a screening process to ensure they are suitable, and any convictions are known about. Despite these thorough...

Cyberbullying, we have actually all heard of it and most of us have even experienced it in some way or another. There is no doubt, that being intentionally bugged in hostile good manners on the Internet can have deadly consequences for the victims. And fatal repercussions were exactly what the 15-year-old Amanda Todd suffered. After...

I enjoyed a buddy of mine in high school become the victim of cyber bullying. She slowly began drifting from her friends, her household and other individuals close to her. She changed the way she took a look at herself, other individuals, and the overall world. Depression is among the largest known symptoms or impacts...