Discrimination is an action where people make a differentiated in category between one person and the other one. They categorized people just because of the different that people have. Not only categorize them, but people also make it become a standard for them to socialization, become a standard to build relationship, hire people and sometimes because of this different, one person can looking down the other people just because they think that they are better than other people that not included in a standard where it can make discrimination.

Don't use plagiarized sources. Get your custom essay on
“ Discrimination: Types and Descriptions ”
Get custom paper
NEW! smart matching with writer

Age discrimination is the way someone or people treating or proposing to treat, someone differently just because of people’s age.

Proficient in: Age Discrimination In The Workplace

They make a cross that become a standard for someone and become a reason for them to not hire people that they thing has already not young enough to be hired. The more old you are now, is not the more big challenges for you to get a job. The company do not think how much is your experiences, how long have you been work, or how talented you are. But what they see is, you are weak, you have not enough energy for them to be use, you only become a worry and there is no benefit for the company hiring you.

From the article above, what can I conclude is there is a discrimination in workplace. In this case, they look at your gender and make it become a reason for them to different people and the reason to not hire people. In this case, women become the impact of this discrimination. They think that women employee will not work as good as the men employee do, the performance that they give is not really good enough if we compare with male employee.

But sometimes a company also make it become their standard and the reason for them to reject people that they won’t be hire at their company. Like for example, to become a model, the company make a rules that require people who is suitable to become a great model is the one who has this tall, their weight should not more than this, must have a slim body, a bright skin, beautiful or handsome. But actually there is no standard to become a model. The company is the one who make that rules. They do not look at someone personality, they do not look at people skill, what they look is only from outside.

Some company maybe think that if they are hiring disability people, it will not give them any benefit, otherwise it will slow down their performance of work, it will make a problem and also it will burden to other employee or the company. These kind of thinking coming because they think that disability people cannot do something better than the one who is not have disability. They forgot and ignore the potential that that person have just because their disability. They categorize people who has a disability into a group that will not helping other, but become the one who always asking a help from other people, and it will slow down other people’s performance.

Because of this discrimination, so many people are think that they are not good enough, they are so damn, they have no potential, they have to raise the standard, they will be nothing if they are not suit as the rules. But actually the standard is making by people differentiate, but the bad things is, people keep following at this differentiate that make people afraid to get out from that zone and go outside to be who they are.

It is okay to have a standard, but I think it is not good if people only look at that standard and do not look the other point. For example there should be okay for woman to have a same job as man can have. There are no reason for them to stop dreaming, raise their dream, growth their potential and make that potential solve the problem that maybe man cannot solve all this time. 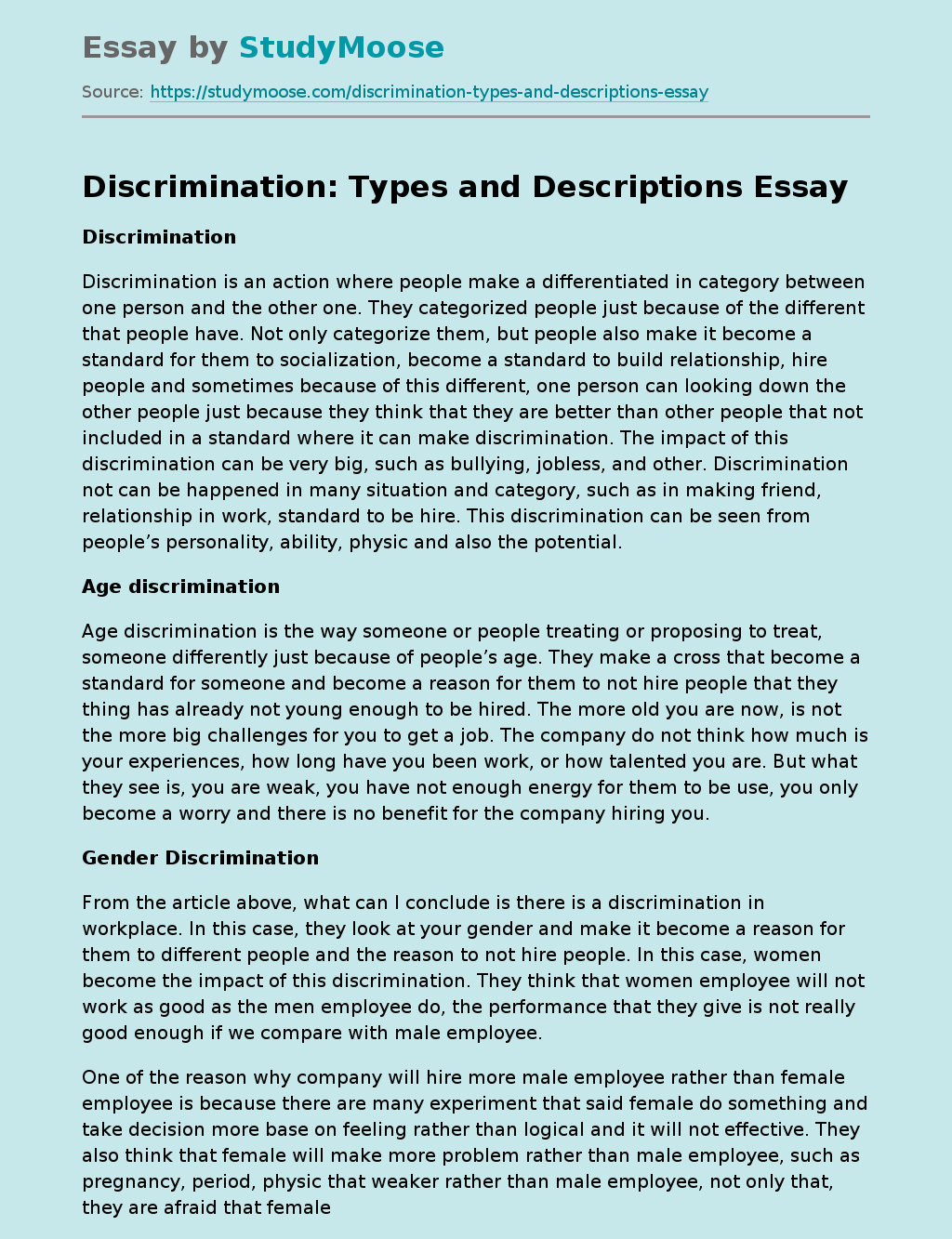