As social workers are involved with comparatively powerless people within the community, they are in an influential position with regards to the fair treatment of many disadvantaged individuals. This unfair treatment comes in the forms of discrimination and oppression. Discrimination can be defined as the act of giving less favourable treatment, through prejudice and stereotype, of individuals typically belonging to groups who are a relatively powerless part of society.

Discrimination can come in several forms: Direct Discrimination, which can be seen directed against gender when, for example, a female is denied a job interview as it is believed she will not fit into the masculine environment.

Don't use plagiarized sources.
Get Your Custom Essay on Discrimination in social work Just from $13,9/Page

Indirect Discrimination is present when the intentions of a rule or policy do not display apparent discrimination, but can result in unequal treatment. Harassment is the occurance of unjust treatment towards a person due to a particular characteristic, such as ethnicity, which makes for an undesirable and sometimes hostile environment or brings about a violation of the victim’s dignity.

Victimisation can occur when a person rightly makes a complaint in line with the Equality Act, and this results in malevolence or negative treatment towards the complainant. From personal experience, I have witnessed this occur within interactions between members of front of house and kitchen staff in a restaurant, wherein an intentionally hostile and cold atmosphere was created for the individual who lodged the complaint.

Oppression is the act of taking the prejudice inherent in Direct and Indirect Discrimination further through negative and unfair wielding of power, inflicting hardship and disadvantage upon those seemingly inferior in the social structure. This power being a force for controlling people which those apparently more dominant in the hierarchy are capable of exerting. The forms Oppression takes include such systems as ageism, sexism, classism, and those in dominant positions use these systems to limit rights and freedoms of these individuals and this unjust domination adversely affects a person’s life chances.

Due to variables inherent in peoples identity, such as age, ethnicity and gender, an individual oppressed on the grounds of skin colour may also be considered to have an advantage over someone considered “old” in socially constructed value as far as age is concerned, and thus could fall into the role of “oppressor”. In a bid to challenge and reduce structural disadvantage, discrimination and oppression within care work, framework for Anti-Discriminatory Practice (A. D. P. ) has been introduced.

A main focus of A. D. P. is “putting the client in their social context”, which is the acknowledgement of not only characteristics specific to different groups, but also characteristics unique to a particular individual, and the tailoring of care in relation to these differences to avoid undermining diversity, as is considered good practice in social work. It recognizes that uniform care does not work effectively for everybody, such as assumed homogeny when treating those of ethnic minorities in an identical manner to when treating a client from the dominant culture.

This could also be viewed as a method of assimilation into the norms of that society, and can be an oppression of identity. Previously, MANAGEMENT? had deemed A. D. P. unimportant (Thompson/Dvies? )and such outlooks made care liable to adopt such exclusive atiitudes as the colour-blind and gender-blind approaches. These are terms that refer to the ignorance of ethnic and gender influences on an individuals personality, resulting in inappropriate and even oppressive treatment caused possibly by care with male or dominant culture bias.

Though these two particular groups are highlighted, discrimination in care work methods can also affect other disadvantaged demographics such as the disabled, elderly and those of different religious beliefs. Thompson argues that maintaining an awareness of A. D. P. is essential in combating discrimination and oppression, and that refusing to intervene becomes “part of the problem”. Furthermore, Giddens (1977) supports the view that failing nuetral use of professional power allows inequalities to persist, and that it must be used proactively to transform oppressive structures.

Giddens also notes that negative use of this power can reinforce inequalities. Another important part A. D. P. is Giddens’ “Emancipatory Politics”(1991) which aims at liberating clients from their disadvantaged positions. Identified within this are three “imperatives” to keep mindful of, the first being Justice, which is suggestive of fair treatment and the confidence that people will not be exploited or have rights denied. Equality is the next, which opposes uniform treatment, identifying it as a barrier to fairness.

Thirdly, Participation is a key concept in objectives to emancipate and empower clients to better cope with, or be liberated from their circumstances, all the while using the client’s legitimate power to counter the power abuse brought about by discrimination and oppression. This involves cooperation of social workers and service users in planning and evaluating services to improve empowerment opportunities and to help the service provide suitable care (Beresford and Croft 1993, in Davies?).

In A. D. P, this relationship is recognised as a “partnership”, a more sensitive term which is not suggestive of power interactions, but more on mutual agreement (Thompson, 1996, DAVIES? ) promoting a sensitivity and understanding about the inequalities to be addressed. Using the word “partnership” can also foster an element of trust between the two parties, as social workers are so often demonised in the media, and this enhances mistrust towards them.

These relationships can run into conflicts between parties, though long-term success relies on not abandoning the partnership and maintaining professional willingness. (DAVIES? ) An important focus in Participation is to enable the client to use their own power to liberate themselves from oppression, and to avoid the “benign paternalism” of the past which created an environment of dependency through protecting the less fortunate from their problems (Bailey and Brake, 1975 DAVIES).

A complication to fair practice in social work is that some situations can be complex and open to numerous interpretations, and this is where the judgement of a professional, takes precedence over technical reasoning and codes of practice (jordan, 1990 pp. 3-4, DAVIES? ). In making professional judgements, moral reasoning and due analysis must be taken to avoid “messy situations”(Schon, 1983). Also essential for professionals to possess a sensitivity towards feelings when making such decisions. Insensitive intervention is a contradiction of A. D. P. and have more negative effects than positive (DAVIES? )

Professionals being a person with attributes such as having engaged in lengthy training with assessment of competence, authority acknowledged by service users and a thorough theory of field based on reasearch evidence (Banks, 2001, Gomm, 1996 BRIANS HANDOUT). Though care must be taken in relation to these decisions to ensure there is no abuse of professional’s power resulting in coercion upon service users(Davies), and instead that it supports equality and emancipation. (DAVIES? ). It is important to not allow subjectiveness and personal prejudices to obstruct care. Also essential for professionals to possess a sensitivity towards feelings 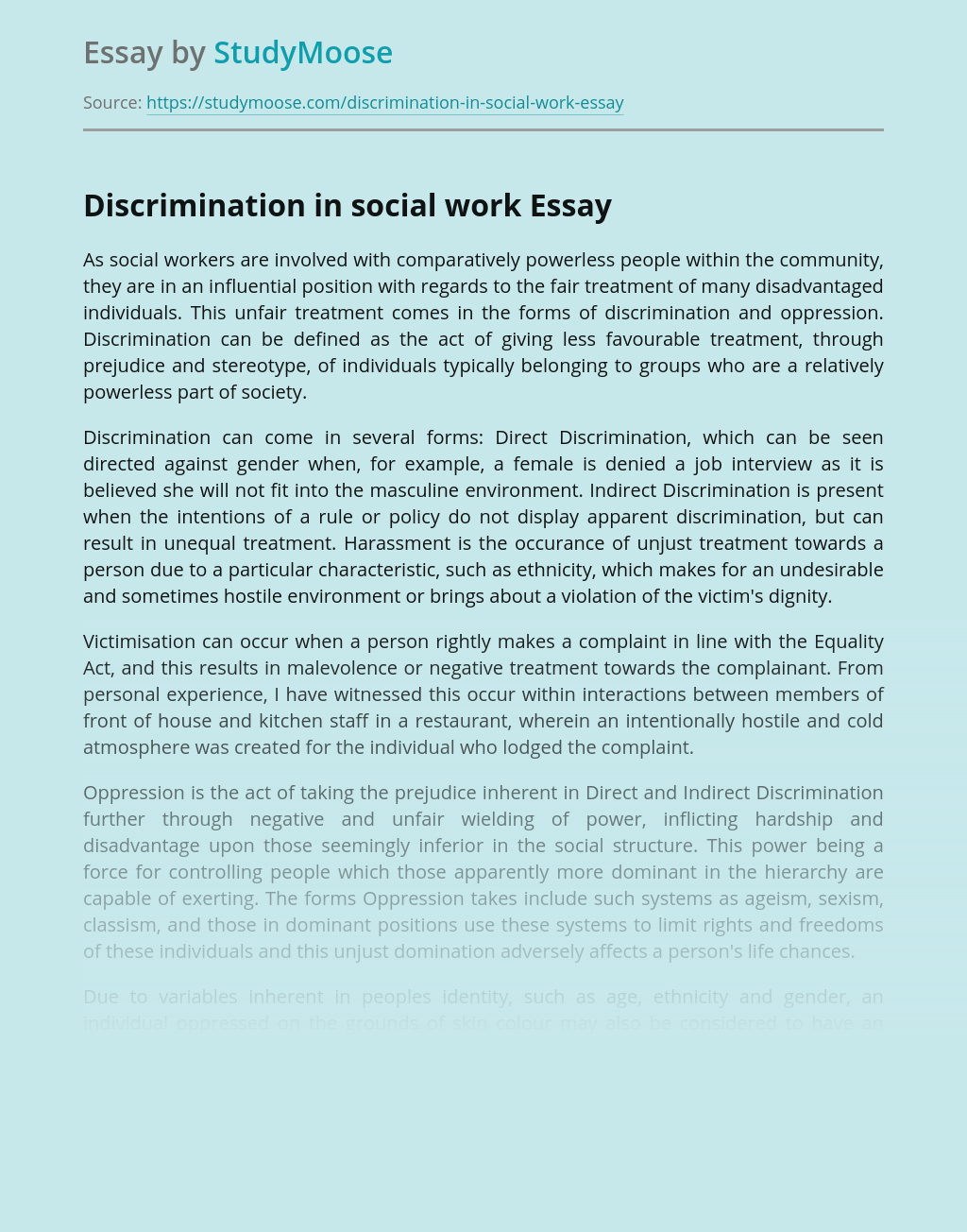 1.1 Define what is meant by: Diversity Equality Inclusion Discrimination Diversity – is meant by acknowledging that each individual is unique and recognising individual differences, For example culture, ability, gender, race, religion, sexual orientation, or any other individual characteristic. Equality – is fair treatment and access opportunities for all regardless of differences like their ability,...

Get Essay
Song of the Whale. About whaling in Japan

Racial discrimination has long been an issue especially in the United States which is considered as a melting pot of different people from different ethnic and cultural backgrounds. Black people have experienced extreme even radical form of discrimination for centuries, but now, the black people found an ally in the affirmative action policy. This policy,...

The three types of Assistance from the lists that I believe that will benefit the organization profiled in Appendix A the most is: 1. Civil Rights and Privacy Rule Compliance Activities (http://www.hhsgov/ocr) 2. Intergovernmental Personal Act (IPA) Mobility Program ( http://www.opm.gov) 3. Labor Mediation and Conciliation (http://www.fmcs.gov) The one program that I feel that is...