There can be many factors that determine whether or not you can get into a college. Do you have the grades, are you involved in your community, have you been convicted. Many questions like those listed above have been commonly asked to applicants who apply for major colleges universities. However, you are never asked your ethnicity during an interview, usually they give you an application to fill out and they have a space that allows you to check which race you are.

Some people feel as though they may have been discriminated against because of their race or ethnicity. It may be true for some, but not all cases are alike, in the sense that racial discrimination in college applicants has been going on for quite a while now.

The school claimed to have had denied his admission because they were designating sixteen of one hundred spots, in each new set of applicants, of one hundred “qualified” minorities as part of their cooperation of the new affirmative action legislation. Bakke did not qualify for any of these sixteen out of on hundred spots because he was white and not black, or a minority.

They did this to readdress the long-lasting one-sided minority omissions from the medical sector. Now, Mr. Bakke’s test score and other qualifications he needed to enter the program were beyond acceptable, but he was still rejected.

He then took his case to court. Bakke went to California court primarily, then he decided to go to the Supreme Court, saying that he was rejected from the university because of his ethnic group.

The question at hand was did the University of California violate the 14th Amendment equal protection clause and/or the Civil Rights Act of 1964 when denying Allan Bakke admission because he was white. Also, the fact that they used affirmative action to do so, would it still be a violation if they were just following the new law laid down by the big guys to help increase the assortment of the minorities already in the university.

Also, you have to take into account that they had very limited resources and wanted to make sure that everyone had a fair chance to apply and get accepted, which is the point of the reservation of the sixteen spots of one hundred for the minorities. To balance the statistics some would probably say.

The case concluded with five votes siding with Bakke, and four votes against Bakke. Ultimately he won the case, but that didn’t stop colleges from not admitting people by their race. This case is similar to the sentiment the Asians are feeling with the bar for them to be able to get admitted into a good college or university being set beyond the maximum.

Some Asians feel as though they are not getting a break and are getting harsher treatment then most American. So is this the same as Allan Bakke felt? Did he feel as though he was given an unruly standard that he would have to live up to in order to be admitted inside of his dream school? I believe that the Asians and Allan have been tested with the same trial that they have to battle out.

Asian-Americans are now feeling that they are losing out because the Board of Regents established a new undergrad admissions policy that gives them expectations at a chance to widen their applicant consortium. However, not everyone is satisfied with the new legislation, especially Asian-Americans. The new policy however, does not state that Asians wouldn’t qualify, it simply gives colleges and universities more tractability in selecting new students.

As the media grapples on to the new concept more and more Asians are coming forward with complaints and angry phone calls and letters from the students of these Asian students and the students themselves. This new policy differs from affirmative action, but not everyone sees the difference between the two. One analysis from a person at the college supports the view of the Asian-American student, implying that the number of Asian students would regress under the new policy.

Parents of these Asian students also seem to feel the sting of the new policy. Outraged, many say that they were blindsided by the university and see it as an act of discrimination. Compared to Board of Regents v. Bakke, it was simply discrimination in the obvious form. They denied him because he was a man of Caucasian decent and they wanted to save sixteen spots specifically for minorities. Which in my view was fair at the time because minorities weren’t given as many opportunities as the whites were. I would have seen that as socially acceptable if I were there in that place of time.

Even with the high grades Mr. Allan Bakke presented to the college, he was still rejected twice. In this case when we are about thirty-five years after that incident, we have arrived to a time in the United States were almost everyone has ‘equal’ rights, per say, and we all have ‘equal’ opportunity, but to deny someone because of their race in this day and age will most definitely result in a law and to me is seen as discrimination because if we work hard and meet the qualifications for a specific job, college, or university we fancy to attend we should be able to do as so.

However, I do understand that some colleges might look at the campus population and notice many members of the same race and decide that they want it to be more diverse, and that’s understandable, but if someone makes the cut, they make it and if the college or university decides not to accept them because they might want the African-American straight A student to join their institution rather than accepting another Asian straight A when they already have so many people from that heritage.

Colleges might also look at creating a more diverse campus as a way to prevent those lawsuits, because if the media starts getting reports of there being an overflow of white students at a college or university ran by a white man or woman, they look dubious, and just racist, but if they start accepting more minorities into their school, spreading a little color over the campus, in a sense, then they look more appealing to applicants who want that diversity in their dream school.

Plus it shows good when schools are being taken to court for discrimination. If they show the statistics, the numbers, of the racial diversity, then that builds on their case. If they show a pie chart and 75% of the chart is green, and green represents white for example, then that makes the school look bad, ultimately allowing a jury to see a possibility of discrimination, but if it’s near equal for minorities and whites, etc. , then it’s good for the school. Making their case more believable.

Debacles like this may never end for years to come because we need diversity in public places, without it, it would be like the Civil Rights era all over again, and we don’t need any more violent protests like we have today. I agree and disagree with the Regents v. Bakke ruling because I believe he should’ve been accepted, but I also believe that if he was aware of what they were doing after the first time he got rejected he should have went to the courts sooner, but there is always the accusation of speculation and that can hold grounds for a dismissal of the case.

However I do agree with the Board’s idea of creating a more diverse campus. By doing so they allowed minorities, who back then had fewer opportunities then the white men and women, to integrate themselves with the majority and find out for themselves that they are all alike. They have two legs and a beating heart and they can tolerate each other’s presence. They should America that public places shouldn’t be segregated, but should hold equal opportunities for minorities and majorities, and by the Board striking the thought of holding those sixteen spots was just the start of a major movement towards desegregation and eventually diversity.

Although it’s sad to see that even in these ages we still have to do that, it is understandable when the media scrutinizes people for the smallest things, and does it even worse to larger corporations, businesses, colleges, universities, etc. I still do not believe that the decision of the Board to make that decision was intentionally targeting keeping Asians out of there schools. I still believe that they did that to create more diversity in a place they saw a populated with the majority of one race.

If that is the case then I think everyone should come to an understanding that there will be a majority and people will want to see changes in that majority, by adding none other than minorities. Adding those minorities keep things balanced and keeps the media away. Again, it provides the students who want major diversity to see that as the perfect school for them.

If a fresh out of high school student decided to go an all-African-American school, applied and got denied, even with the best grades and extracurricular activities. Would that be considered discrimination, even if he was in fact African-American? I doubt that people would try to fight that, but only see that as he didn’t rise up to the standard that the school had set for the applicants. The case would not stick because he qualified, just wasn’t admitted to the institution.

In conclusion, Bakke v. Regents is similar to the slim chances of Asians getting accepted into colleges and universities because of their race. However, in Bakke v. Regents the Board was trying to create equal opportunity for minorities, but in the example of the Board seeking new policy to give the campus more flexibility in who they choose to accept into the college, just seems like discrimination. In both cases there was discrimination, but is there a thing as good discrimination?

I think that there is a good grounds for discrimination if there needs to ever be more diversity, but I don’t think us, being the ‘land of the free’, should ever succumb to that. As far as we have come from the Civil Rights movement itself and having to decide whether or not the whole world was racist, pretty much. We shouldn’t have to input new policies like that, making a certain group feel insecure about their educational future.

Discrimination in College Admissions. (2016, May 15). Retrieved from http://studymoose.com/discrimination-in-college-admissions-essay 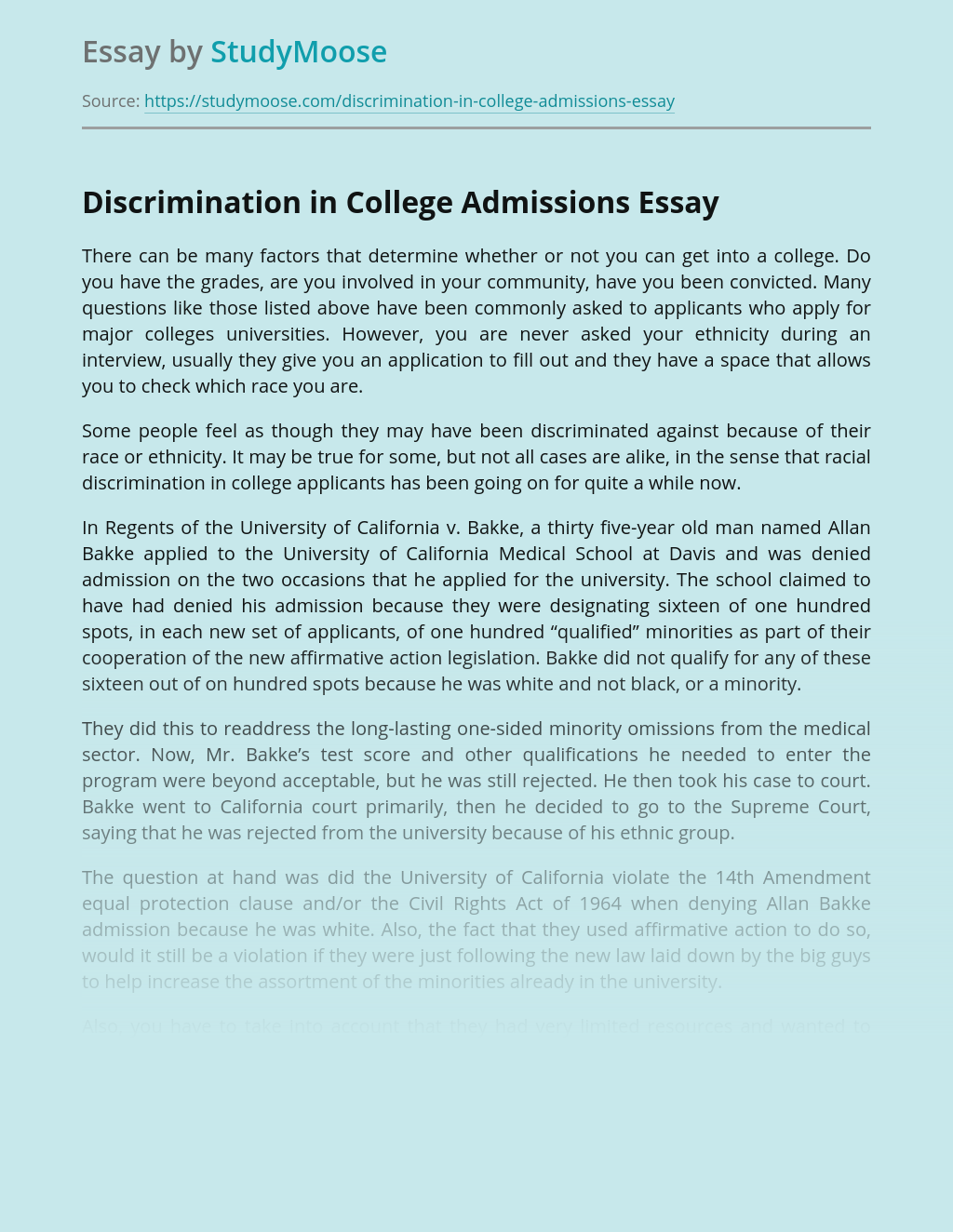 Don’t waste time
Get a verified writer to help you with Discrimination in College Admissions
Hire verified writer
$35.80 for a 2-page paper
Stay Safe, Stay Original