As far as historical records show, no society or nation has been immune to discrimination, either as victim or victimizer. Contemporary forms of discrimination date back to when European colonizers penetrated and transformed previously isolated societies and peoples. The more extreme forms of discriminatory practices include genocide, slavery, legislated discrimination (such as Apartheid), discriminatory immigration laws, and disenfranchisement. Less extreme forms of prejudice and discrimination, but nevertheless pervasive and oppressive, include social exclusion at the institutional level (such as in schools and hospitals), and the more subtle forms practised by the media.

Don't use plagiarized sources. Get your custom essay on
“ Discrimination – Effects of Discrimination ”
Get custom paper
NEW! smart matching with writer

Some groups appear to suffer from more persistent forms of discrimination, such as Jews (as in anti-Semitism) and the Roma (a.k.a. Gypsies), regardless of time and place.

The keywords that need to be looked into before delving the topic in question are ‘discrimination’ and ‘disturbing’. According to the Oxford Dictionary, disturbing means causing distress or worry or anxiety, upsetting, an unpleasant mental state by such effects as irritation, unfairness and distraction.

Discrimination, brings the meaning unfair treatment of a person or group on the basis of prejudice and partiality. It can lead to emotions such as frustration and anger. In humans, it is a mild or serious form of suffering, often with anger about this, in particular, if applicable, anger at the person or persons who caused it. This essay examines the cause and effects of discrimination in it’s various forms, on an individual, society or nation.

Our world has always been faced with the problem of discrimination.

It is one of the most discussed topics nowadays and throughout history. In all countries there is most likely at least one type of discrimination that affects different groups of people. The definition of discrimination is the denial of opportunity or equal rights for a specific group of people that may be differentiated by things such as their religion, color of skin, or gender. Discrimination can be confused with other terms such as prejudice and stereotype. The world we live in has been struggling with this sensitive subject for as long as we have recorded. Stereotypes are images held in our minds in regards to certain racial or cultural groups, without consideration of whether the images held are true or false. Stemming from stereotypes is prejudice. The prejudicial attitude occurs when we prejudge a person, good or bad, on the basis that the stereotypes associated with the person or group being prejudged are true. Discrimination is the combination of the terms mentioned above, but involves actually acting out with unfair treatment, directing the action towards the person or group. Prejudice and discrimination do not just occur racially, but it is found among gender, religion, culture, and geographical background. Remember that prejudice is a result of attitude and discrimination is a result of action.

Many people believe discrimination has made big steps forward, but has it really? If it has, why do people still get turned down, receive hate mail, or get ridiculed simply because they differ from each other. I guess these are questions we must ask ourselves. I guess you could also ask yourself if you have ever called anybody a name, looked at them different or judged them when you did not even know them or understand them. You may be thinking “That is not discrimination,” but, in fact, it is.

CAUSE AND EFFECTS OF DISCRIMINATION

As to the root cause, discrimination appears to be no clear acceptance of any theory of causation but that discrimination often causes a chain reaction of disadvantages. For instance, it should be noted that there is a connection also between discrimination and social distance, given that it is usually psychologically easier to discriminate against people that one is not familiar with.

Discrimination produces immense effects in the psychological, social, political, and economic domains. Whether intended or not, the effects are compounded by the loss of self-worth, a sense of alienation from the wider society, political disempowerment, and economic inequalities. Prejudice and ethnic hostilities constitute a major danger to peace both within a nation and among nations.” As a consequence, the emergence of a new global moral order increasingly provides a leverage point to counter the effects of prejudice and discrimination. While many agree that the various international instruments to protect people against prejudice and discrimination are still not universally followed or even implemented, it is clear that a new international consciousness is indeed emerging and is, in fact, intensifying.

The effects of discrimination in society are reflecting on race, religion, and disable discrimination. One of the main reasons cause violence is race discrimination. It is easy to find evidence from Hollywood movies. The black people always fight with white people because they were discriminated. Now in Australia, the aborigines are discriminated. Many people do not understand their culture, so the Australian looks down on these people. In addition religion discrimination can endanger the world peace. Different religion has different god and the numbers of believers are huge. Once the conflict between different religions break out, which can easily cause a world war. Discrimination is about exclusion an d subordination and it effectively conveys an explicit message of differentness and inferiority of the victim – Humiliation.

Studies carried out in the field of racial discrimination provide also direct proof of this humiliating nature of discrimination, as it has been found that experiences of racism and racial discrimination have a direct bearing to the psychological well-being of persons w ho have suffered ethnic discrimination: such experiences were found to increase symptoms related to anxiety and depression. There are no reasons to believe that the same would not apply with regard to the other grounds as well.

Victims of discrimination cope with these experiences in a variety of ways. As a response to experiences of discrimination, victims often – consciously or unconsciously – develop a strategy of survival. Some engage themselves in what might be called denial of discrimination. They may explain the incident in terms other than discrimination, or even believe that the discriminatory framework was legitimate, blaming themselves for what happened. One very typical strategy of survival is avoidance, by way of which an individual seeks “voluntarily” to avoid situations in which the probability to end up discriminated against is particularly high, by way of self-imposed restrictions. From the point of view of the society this is not however a desirable strategy, as lessened social contacts ruin the possibility of integrating vulnerable groups to the general society. Discrimination leads to disunity which results in the dissolving of society, through strife and war. World peace will elude our grasp while discrimination continue to bedevil the collective life of humanity

Discrimination runs against the most fundamental values of a modern society. In fact, it is a threat to democracy, which is predicated on the idea of a society in which arbitrary hierarchies and preferences based on, for example gender, ethnic origin, and wealth have been eliminated with a view to achieving equality. Democracy recognizes worth and equal rights of all whereby, equality prohibits discrimination which is also the cornerstone of human rights.

Discrimination not only forms a menace to the society, but also to the individual who is subjected to such an adverse treatment as it is a direct denial of the equal worth of the victim. It is a violation of a person’s identity. The consequences of discrimination match the severity of the offence, a causal link to alienation, exclusion, radicalization and decreasing psychological well-being.

Therefore, discrimination is wrong because it is selfish. Discrimination throughout the world today occurs to many extremes. From one extreme to another, it is in any way wrong. Discrimination is happening all over the world, today for many reasons. One being because parents have taught their children to believe and think the way they do. The only thing we can do about it is to raise our children to not discriminate against others. It could lead to more tension and fighting within people and groups. To sum up, the discrimination can cause many problems. The government should constitute laws to avoid it, and society should also set up some organizations, programs or communities to help build a better plateau – rid of discrimination. 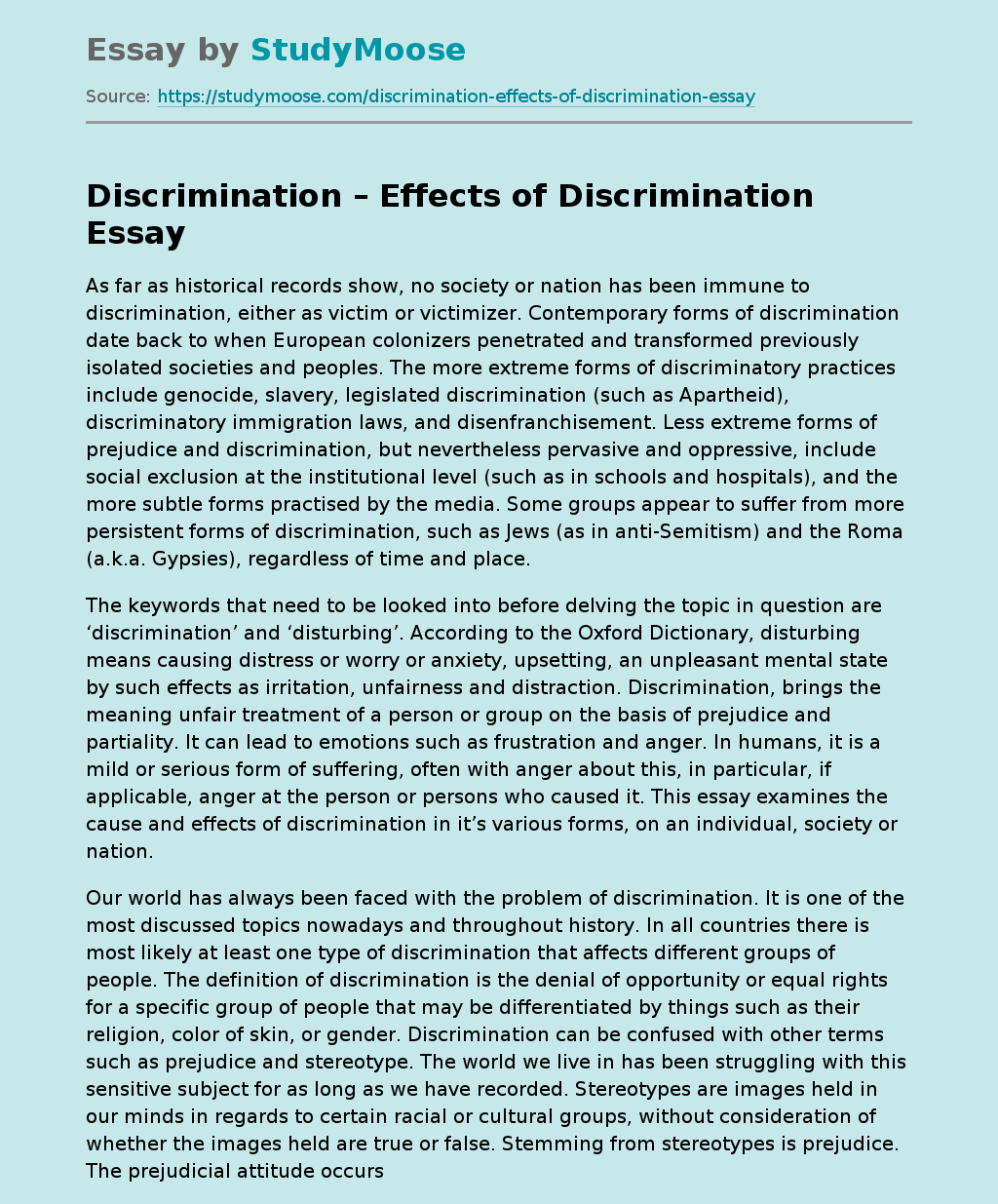