In “Discourse on Colonialism” mentioned on page two, paragraph three, the author makes a connection with the misinterpretation of how the Europeans thought that those who did not practice Christianity were savages. “…is Christian pedantry, which laid down the dishonest equations Christianity=civilization, paganism=savagery, from which there could not but ensue abominable colonialist and racist consequences, whose victims were to be the Indians, the yellow peoples, and the Negroes.” In Things Fall Apart, when the missionaries landed in Africa, they accused the Umuofians of ignorance for not knowing how to “properly” practice religion.

Don't use plagiarized sources. Get your custom essay on
“ Discourse On Colonialism Book Review ”
Get custom paper
NEW! smart matching with writer

At the time of Things Fall Apart, religion was associated with “living things” while the European missionaries said that “correct religion” came from worshipping gods that were not concrete objects. On page 146 the text said, “Your gods are not alive and cannot do you any harm,’ replied the white man. ‘They are pieces of wood and stone.”

This shows that the Europeans established supremacy over the Africans by denouncing their religion, which ultimately aided their efforts to colonize the Blacks.

On the very first page of “Discourse on Colonialism”, it says “A civilization that proves incapable of solving the problems it creates is a decadent civilization. A civilization that chooses to close its eyes to its most crucial problems is a stricken civilization.” The same situation occurred in Things Fall Apart with the initial European contact because the Umuofians did not see them as a threat. This led to the decimation of their culture as the Umuofians allowed the Europeans to live amongst them and convert the outcasts.

That was the Umuofians biggest mistake because when the Europeans had established a base of converts, it helped them to continue to convert the tribesmen and eventually take over the African tribe. Connections with Kaffir Boy:

In “Discourse on Colonialism” by Aime Cesaire, he talks about the effect he witnessed due to colonialism which he believes “dehumanizes even the most civilized man”. He is talking about in Kaffir Boy, Mark at young age, witnesses the “dehumanization” of his father. “He seemed uncharacteristically powerless and contrite, a far cry from the tough, resolute and absolute ruler of the house I knew him to be, the father whose words were law.” (pg 22). A fine line is formed between races as Mark observes. At the time, the white people had established supremacy over the black people due to the laws of Apartheid. When Mark’s father was being dehumanized, it was a very overwhelming occurrence for Mark because he learned there are individuals who have more power than his father. Page two of “Disclosure of Colonialism” the author speaks of the “brutalized and degradation of the colonizer”. The blacks are brutally treated by their own people even. They can take a man and turn him into an animal.

Evidence: The diction of Discourse on Colonialism is anger. The author, Aime Cesaire, expresses his opinion concisely, and emphasizes how Europe is indefensible spiritually and morally. “Henceforth, the colonized know that they have an advantage over them. They know that their temporary, “masters” are lying. Therefore, that their masters are weak.” (pg 1). In Cesaire’s opinion, the Europeans are indefensible because their actions to colonize are lies to the eyes of Africans. Since these lies are not acknowledged by the natives the Africans can fight back with their religion, and crumble the colonizers without faltering. Even the title “master” is acknowledged as a lie. The Africans know that the colonizers are not the ones to command them. Cesaire knows that in the perspective of a native. Cesaire speaks without humor. His seriousness can be found throughout “Discourse on Colonialism”. Many times he points out the hypocrisy of the colonizers. His criticism of the Christians is relentless. He points out the “Hitler” side of everybody.

Currently in syria there is an uprising in a place resembling the slums in which Kaffir Boy takes place. Mark grew up in a place where jobs were hard to come by, and people were dragged out of their houses at night by the police and were sometimes shot. This week in syria, “Islamist extremists in Syria’s insurgency killed 150 soldiers in a battle for control of an Aleppo suburb this week, including 51 who were executed after they had surrendered.” The same sort of thing happened in Kaffir Boy, except it was the opposite with the police killing the civilians, going to their houses at night so the police knew people would 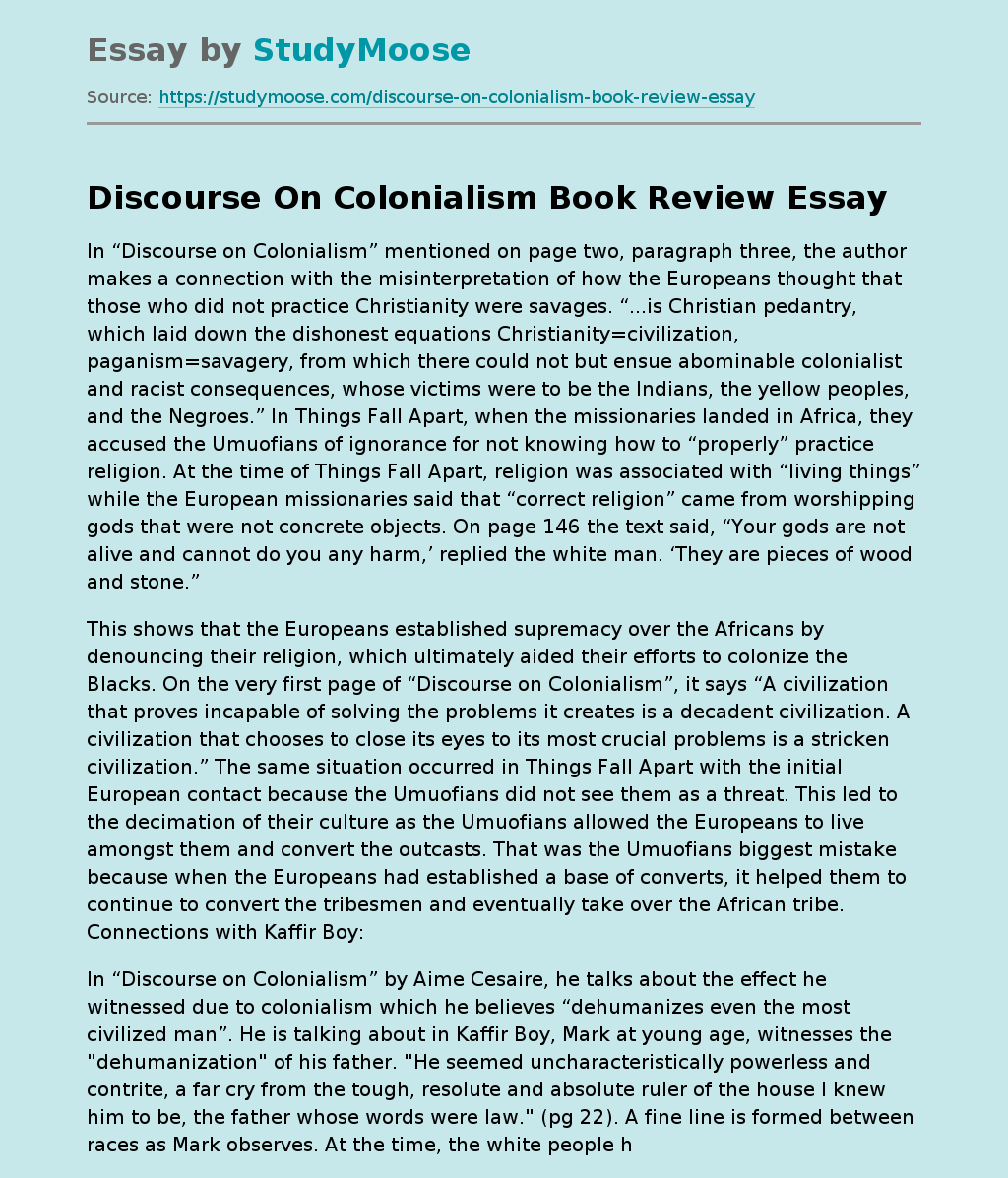