Disaster in Bangladesh: The Collapse of the Rana Plaza Building

1. From an economic perspective, was the shift to a free trade regime in the textile industry good for Bangladesh? Employment and economic growth in Bangladesh depends upon exports of textile products which were allowed through a preferential quota system for textile market export from poor markets to rich markets. As soon as the shift to a free trade regime appeared along with the competition with countries such as China and Indonesia the quick collapse of Bangladesh’s textile industry has been predicted.

Don't use plagiarized sources. Get your custom essay on
“ Disaster in Bangladesh: The Collapse of the Rana Plaza Building ”
Get custom paper
NEW! smart matching with writer

However, the opposite occurred. We can highlight three major reasons to explain what happened: First is labor costs are low, even lower than in China. Obviously low hourly wages rates explain it but not only. Investments by textile manufacturers in productivity-boosting technology lowered the labor costs in Bangladesh making it one of the world’s low-cost producers. Indeed, this was an advantage during the recession because big importers increased their purchases at low prices.

Thus, garments manufacturers save transport and storage costs, import duties which boost their productivity. The last one is many western importers looking to diversify their supply sources. Indeed, importers fear to become too dependent toward China. As a conclusion, the reasons why Bangladesh took advantage from the shift to a free trade regime in the textile industry are beyond only low wage rates. Moreover, Bangladesh’s textile market may keep growing the next years because the trend to shift textile production away from China may continue as the wage rates are increasing fast.

2. Economically who benefits when retailers in Europe and the United States source textiles from low-wage countries such as Bangladesh? Who might lose? Do the gains outweigh the losses? For Bangladesh, it has competitive advantages which are low cost and low price. For U.S., it has higher price and fewer garments purchased locally; also, it has possible loss. Low income countries, Bangladesh’s economy, Hong Kong and customers benefit when retailers in the U.S source textiles form low-wage countries. High development countries such as U.S. may lose. Yes, gains do outweigh the losses. Bangladesh will slowly develop.

Economy will get improve.

3. What the causes of the weak safety record of the Bangladesh garment industry? Do Western companies that import garments from Bangladesh bear any responsibility for what happened at the Rana Plaza and other workplace accidents?

There are few regulations in Bangladesh, “there are no rules whatsoever that cannot be bent”. From this we can see that the government of Bangladesh does not care about the safety about these factories. The industry is characterized by low cost, fast production relying on cheap labor and production costs to compete with its competitors. Over three million workers, the majority of whom are young women, are employed in the Bangladesh garment industry and remain the lowest paid garment workers in the world. The lack of alternative employment options combined with widespread poverty mean these women are forced to accept jobs that are poorly paid and carried out in workplaces that fail to adhere to the most basic standards of health and safety. The rapid expansion of the industry has led to the conversion of many buildings, built for other purposes, into factories, often without the required permits.

Others have had extra floors added or have increased the workforce and machinery to levels beyond the safe capacity of the building. Many factories run throughout the day and night in order to meet production targets. The establishment of factories, or the conversions of other buildings into garment factories, has often been done as quickly and as cheaply as possible, resulting in widespread safety problems including faulty electrical circuits, unstable buildings, inadequate escape routes and unsafe equipment. Yes, I think western companies should bear the responsibility. They need cheap labor in Bangladesh, but without considering and oversight of security issues about these factories

4. Do you think the legally binding agreement signed by H&M, Zara, Tesco and others will make a difference? Does it go far enough? What else might be done? Yes, I think the legally binding agreement can improve the safety level of factories in Bangladesh. But, I think it is not enough, Five years agreement it is not enough. If they still want to produce their product, they need supervise the safety forever. They must to focus on the workers safety.

5. What do you think about Walt Disney’s decision not to purchase merchandise from Bangladesh? Is this an appropriate way of dealing with the problem? I think that Disney’s making a mistake here, withdrawing from any form of manufacturing in Bangladesh. It is of course their business and it’s quite probably a decent enough short term move for them. However, it’s exactly the wrong decision if we’re going to try and solve that long term problem of poverty in Bangladesh.

Disaster in Bangladesh: The Collapse of the Rana Plaza Building. (2016, Jun 01). Retrieved from https://studymoose.com/disaster-in-bangladesh-the-collapse-of-the-rana-plaza-building-essay 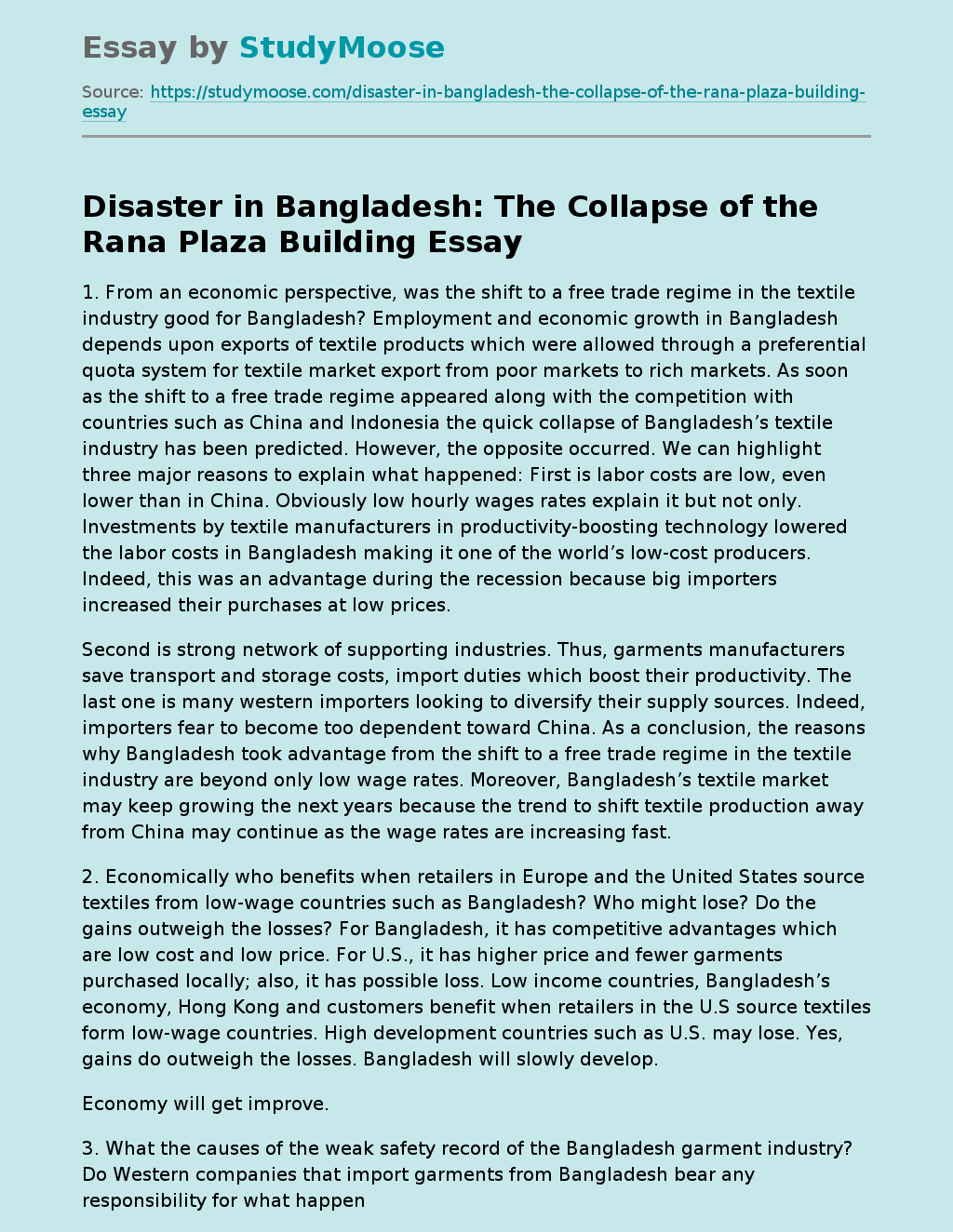