Dirk Van der Elst's "Culture as Given, Culture as Choice"

In this text, anthropologists Dirk Van Der Elst and Paul Bohanan discuss the concept of multiculturalism. The text states that an entirely different view of culture is needed in the intellectual discourse of society. Elst analyzes culture using the example of analyzing sex. Elst makes it clear in his analysis that pluralities of identity are the norm, that everyone is multi-ethnic and multi-racial in some fashion

Even when discussing the contemporary mainstream political debate over what constitutes ‘multiculturalism,’ it is common cultural phrasing to view culture as a stagnant unit.

Don't use plagiarized sources. Get your custom essay on
“ Dirk Van der Elst’s “Culture as Given, Culture as Choice” ”
Get custom paper
NEW! smart matching with writer

Multiculturalism is defined in this text as the manner in which more cultures are incorporated into the framework of the dominant discourse., rather than being a way of deconstructing notions of how culture itself is perceived and misperceived.. Elst suggests that nothing really exists as ‘culture,’ instead culture itself is a “constructed, socially produced norm.” After reading this book I got the feeling that the authors purpose was mainly to advise each individual to study and redefine his own culture.

So with that said, I dug down deep and asked myself, what does culture mean to me? And how does culture influence my person, political and social life? The book says that culture means “everything that human beings have created and transmitted socially across time and space (32).” He also states on page 33 that people are said to “carry” culture, to bear it from one person or generation to another.” My parents passed their culture on to me, and I will do the same for my children.

I was raised a Roman Catholic, and in my family, our heritage plays a huge part. My Irish culture gives me a sense of pride. My parents started me in step dancing when I was five and I loved it. Saint Patty’s Day is bigger than Christmas in my family.

We like to talk, we like to tell stories, and we like to drink, of course. But as much as I identify myself with being an American, a woman, a twenty something, elementary education major at Rowan University, or even a Catholic, I identify with being Irish more. Like I said, I grew up in my heritage, much in the same way many people may have grown up in theirs. My culture has always been a big part of my personal life, but I never really paid much attention as to how it affected my political and social life.

As far as my social life goes, I do not associate only with other Irish people. I have a very culturally diverse group of friends. I think that this also adds to who I am. I consider myself to be well rounded and open to many things and ideas. However, my fiancé is an Irish catholic, and when I think about it, most of my exes were Irish Catholics too. I couldn’t tell you if I choose a partner consciously or not. It could be due to the fact that we have common interests, like drinking. Politics does not interest me at all. So with that said, at this moment my culture does not affect my political life because I don’t have one.

Perhaps what is most unique about this book is that it moves cultural anthropology from being this subject of strange behavior that is out there by others and makes it close and personal by repeatedly challenging the reader to use anthropology to identify with and appreciate ones self and ones own choices. It is a clear statement of why people should study anthropology. Mainly, in my own opinion, it makes you think and that is what is most important when you read. 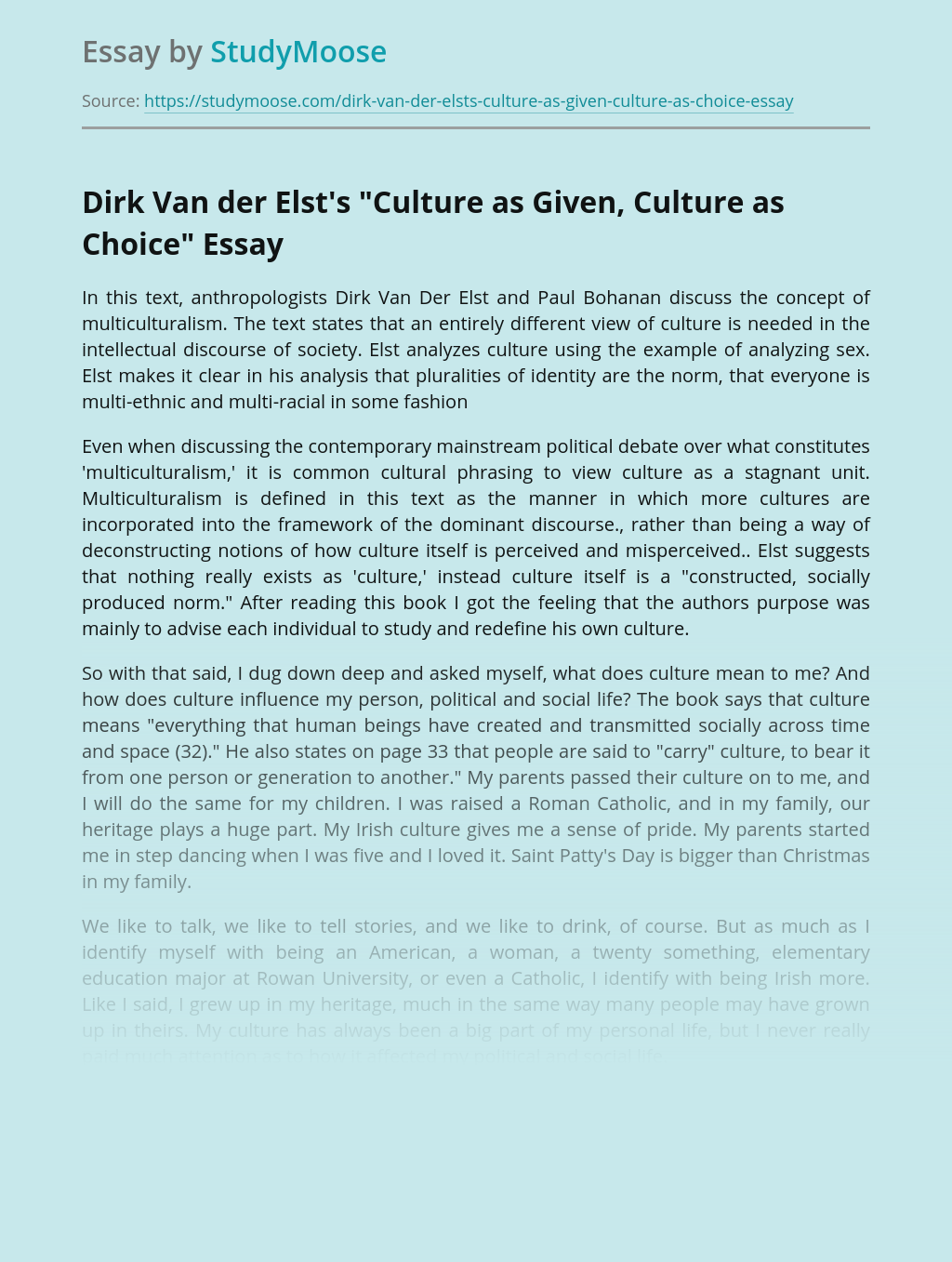