Digestion is the breakdown of large insoluble food molecules into smaller molecules so they can pass though the intestinal wall into the bloodstream and be transported throughout the body. There are seven different food groups in a balanced diet which should include Carbohydrate, fat, water, protein, fibre, vitamins and minerals. Although most foods contain these in some shape or form the foods that contain most of one type fall into that category, a chicken fillet for example would fall under the protein category because it contains more protein per hundred grams than any other nutrient.

Don't use plagiarized sources. Get your custom essay on
“ Digestion and Food ”
Get custom paper
NEW! smart matching with writer

This assignment will explain the systems and processes necessary for the digestion of a Beef sandwich and a chicken Tikka Masala with rice. In the digestion of a beef sandwich containing sliced Beef, bread, butter and a chicken Tikka Masala there are different stages of where food is broken down. Enzymes are added at different times to ensure the food is absorbed properly. Digestion technically starts in the brain.

Even before food touches your lips the stomach is already preparing for the food about to be ingested.

The ingestion process starts with taking food into the mouth (eating and drinking). The purpose of this is so the food can be cut into smaller pieces and saliva is added before it is swallowed. This is where the first enzymes start work. There are two enzymes found in the saliva of the mouth, salivary amylase and lingual lipase. Amylase breaks down dietary carbohydrates such as monosaccharides, disaccharide sugars and complex polysaccharides (starch).

Monosaccharide’s can be easily absorbed into the bloodstream so the others need to be broken down into these before they can be absorbed (Derrickson, Tortora 2006 p906). The salivary amylase starts to break down the polysaccharide starch found in the bread of sandwich and the rice in the chicken Tikka meal while it is being chewed. Once the food has been swallowed it slides down the throat which extends into the esophagus. The smooth muscle, mucus and secretions in the esophagus enable the food to slide down easily into the stomach.

At the end of the esophagus is the lower esophageal sphincter which connects to the stomach. The stomach is a j-shaped organ where food is mixed with gastric juices secreted by the lining. The gastric juices consist of water, enzymes and hydrochloric acid to kill any harmful bacteria (Parker 2007 p176). The main enzyme in the stomach is called pepsin which specialises in the break down of protein. Gastric pepsin breaks proteins into polypeptides, pancreatic trypsin, chymotrypsin and carboxypeptidase which change the polypeptides into peptides (Lippincott, Williams, Wilkins 2005 p224).

The proteins in the beef part of the sandwich and chicken part of the Tikka Masala are broken down by theses enzymes in order to extract the essential amino acids found in the peptides so that they can be easily absorbed in the small intestine where the food moves to after the stomach has done its work. The intestinal mucosal peptidases in the small intestine break the peptides down into amino acids allowing this to happen. As the carbohydrate (rice and bread from the two meals) enters the stomach the salivary amylase is deactivated by the ph level.

As the food then enters the duodenum which is the first part of the small intestine, another type of amylase is then added from the pancreas which changes the carbohydrates into simple sugars (Parker 2007). The simple sugars are maltose lactose and sucrose. As these are pasted further into the small intestine ‘the enzymes maltase, lactase and sucrase chop maltose, lactose and sucrose into smaller bits, more easily absorbed, which are eventually converted to glucose and absorbed through the intestinal walls into the bloodstream’ (Collins 2007).

Once this has happened the glucose is transported to the liver where it can be where it can be stored or distributed to cells throughout the body (Collins 2007). Fats fall under three categories, saturated (mainly found in animal products); Unsaturated (fish, nuts) and Trans fats which are mainly found in vegetable oils and processed foods made from hydrogenated vegetable fats. Fats or lipids as there also known ‘are diverse compounds that are grouped together because they are insoluble in water, but soluble in nonpolar solvents’ (Bailey 2008).

This means lipids take longer to digest than carbohydrates and proteins. The fat content of the two meals comes mainly from the butter of the beef sandwich and the cream of the Masala sauce. The Short chain triglycerides found in these are digested by gastric lipase in the stomach. The majority of fat digestion though is done in the small intestine where pancreatic lipase and bile salts are added.

The bile salts emulsify fat into droplets which makes them water soluble allowing them to be absorbed more easily. The pancreatic lipase ‘breaks down fats and phospholipids into a mixture of glycerol, short and long-chain fatty acids, and monoglycerides’ (Lippincott, Williams, Wilkins 2005 p224). Small finger like projections on the small intestine called Villi give it a large surface area making it easy for the absorption allowing the fatty acids and monoglycerides to pass through into the blood stream.

Nearly all vital nutrients from food are absorbed in the small intestine and the left over waste that passes into the large intestine afterwards is known as the chyme. The chyme descends through three main regions of the large intestine called the caecum, colon and rectum. During this journey sodium, chloride, and water are absorbed through the lining of the colon into the blood making less watery faeces to be excreted out of the anus. 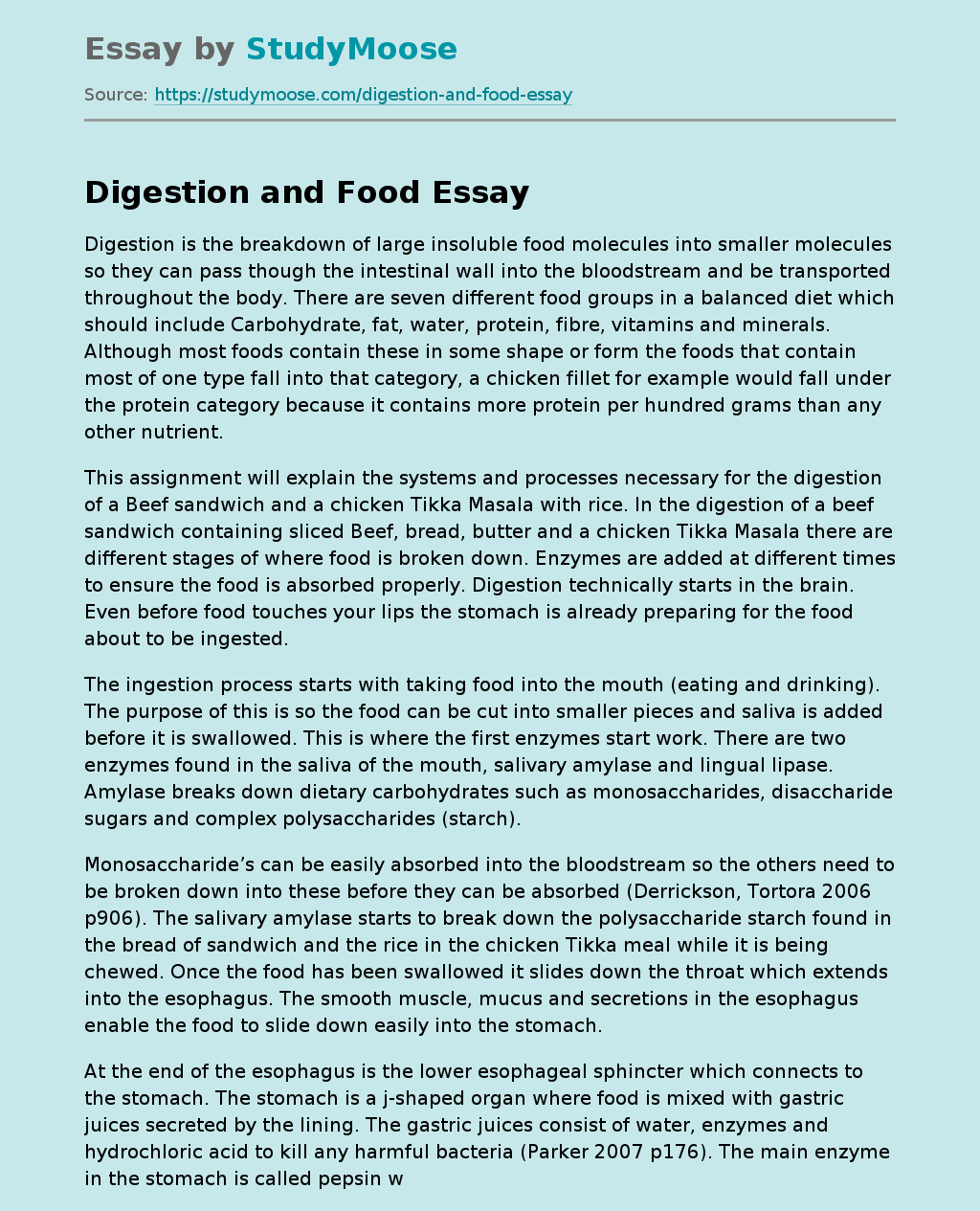