It is amazing how diverse the various types of culture can be. From country to country, even down to the different states and regions within the same nation. Culture is said to have five basic characteristics; it is learned, it is has symbolic structure, it is shared, and it has the ability to adapt. It is a system consisting of variables that constitute a rational way of life (Vien, 2003). A change in social environments results in a change in culture as well, which is why Vietnam has three different regions.

Don't use plagiarized sources. Get your custom essay on
“ Different Types of Vietnamese Foods ”
Get custom paper
NEW! smart matching with writer

Many times, food is a factor that differentiates cultures from various areas. Within Vietnam are three regions: Bac Bo (the north), Trung Bo (the center) and Nam Bo (the south). Each of these regions not only carries their own culture, but they also speak different dialects and are famous for their own kinds of dishes.

One of the common traditions within all three regions is rice. Vietnamese culture always includes rice in every meal.

With 70% of the Vietnamese population residing in rural areas containing small-scaled paddy rice farmers, Vietnam the second largest exporter of rice in the world (Rutten, Dijk, Rooij, & Hilderink, 2014). Rice is often served as the main complementary entrée eaten with side dishes. The customary way to eat in The Vietnamese involves a family style dinner. Everyone has their own small bowl of rice, while the center of the table consists of many different types of side dishes and sauces (Countries, 2014). These types of dishes are representative of different regions and their wealth.

The wealthier the family, the more protein or dishes are served. Everyone uses the chopsticks (the common Vietnamese utensil) to pick at the center dishes and bring food back to their bowl of rice (Countries, 2014). The traditional drink during mealtime is freshly brewed tea served from a teapot.

Although the Vietnamese regions share some common food-related traditions, the dishes can differ in their own unique way. Each region is known to have its own specialty dishes that were influenced by its surrounding environment. Climate plays a huge factor in foods that are popular amongst these areas. Climate affects the food in several ways, such as direct effects production of crops, which leads to food supply (Gregory, Ingram, & Brklacich, 2005). Each of these groups has its own distinctive culture and is associated with a specific environmental setting (Vien, 2003). Also, another factor to consider on the different types of food from each region is the influences from the neighboring countries.

The first region is North Vietnam; Bac Bo. China influences many of Bac Bo’s dishes. That’s why many of the dishes tend to be more stir fried and include egg rolls, soy sauce and MSG (Destination, 2014). Their dishes tend to have delicate flavors. The weather in North Vietnam is a bit colder; therefore they cannot grow much herbs and spices (Destinations, 2014). Their dishes have less vegetables, fish and meats compare to other areas in Vietnam (Destinations, 2014). Since they don’t cook with chilies, use black pepper and they use less sugar in their dishes. A popular dish that originated from Bac Bo is Banh Cuon. Banh Cuon is a paper-thin rice pancake rolled with ground pork and mushrooms with a side of dipping sauce with herbs and sausages. Southern Vietnam, Nam Bo, is also hugely influenced by China. However, influences from India, France, and Thai have also made an impact on their food (Destinations, 2014). The Red River Delta, in Southern Vietnam which is right beside the Mekong Delta has the highest level of agricultural service distribute from their regions (Adger, 1999).

The warmer weather supports the growth of more crops such as animals, vegetables and fruits (Food, 2014). Nam Bo cuisine tends to be richer in flavor since they use more sugar, fresh herbs and garlic. A popular dish from South Vietnam is Cha Tom. Cha Tom is shrimp wrapped in sugarcane. The Central of Vietnam, Trung Bo, is mostly known for their spicy dishes. This region contains the mountainous environment which produces many spices (Food, 2014). The foods in Trung Bo closely resemble the royal cuisine back in ancient Vietnam, very decorative and colorful for the kings and queens (Food, 2014). A popular dish in Central Vietnam is Bun Bo Hue. Bun Bo Hue is a spicy soup with rice vermicelli and beef. Vietnamese cuisines are infiltrating into America as well. The popular Vietnamese soup, Pho, beef noodle soup has captured the hearts of America (Loh, 2002). Pho cannot be found everywhere in America yet, but it is likely to become the next mainstream Asian cuisine in America (Loh, 2002). There is a couple of states that have Pho restaurant but mostly in California. A Campbell Soup Company has partnered with a Vietnamese American chef to create a refrigeration pho broth to the food service industry (Loh, 2002).

Also, Chefs at University of Massachusetts in Amherst started serving Pho once a week in the residential dining halls (Loh, 2002). The school’s director of dining services says, “If it gets more popular, we’ll make it three times a week.” The This Vietnamese broth is one of a couple of Vietnamese cuisines that influence Americans. Banh Mi, Vietnamese sandwiches is the next big food item that America has adopted. In 1983, the first Lee’s Sandwich was created in San Jose CA (Lee’s, 2014). Lee’s sells a mix of modern and traditional Asian-American cuisines: traditional Vietnamese sandwiches and American sandwiches on baguettes or croissants both can be found on their menu (Lee’s, 2014).

With this strategy, Lee’s Sandwich has developed to become one of the fastest growing restaurants chains in the West. Lee’s Sandwich was recognized as one of the Top 50 foodservice bakery in the United states by Modern Baking in 2005 (Lee’s, 2014). Standing today with 55 stores country wide. Lee’s sandwich is another wonderful Vietnamese cuisine that is slowly but surely influencing America. The Vietnamese culture is gradually growing throughout America with the help of Vietnamese-Americans citizens. The U.S. does a good job of upholding our reputation of diversity; it is astonishing to see how this country is so open to trying new and different types of food. The willingness to intertwine with other ethic culture and food continues to make huge progress in this development.

Different Types of Vietnamese Foods. (2016, May 12). Retrieved from https://studymoose.com/different-types-of-vietnamese-foods-essay 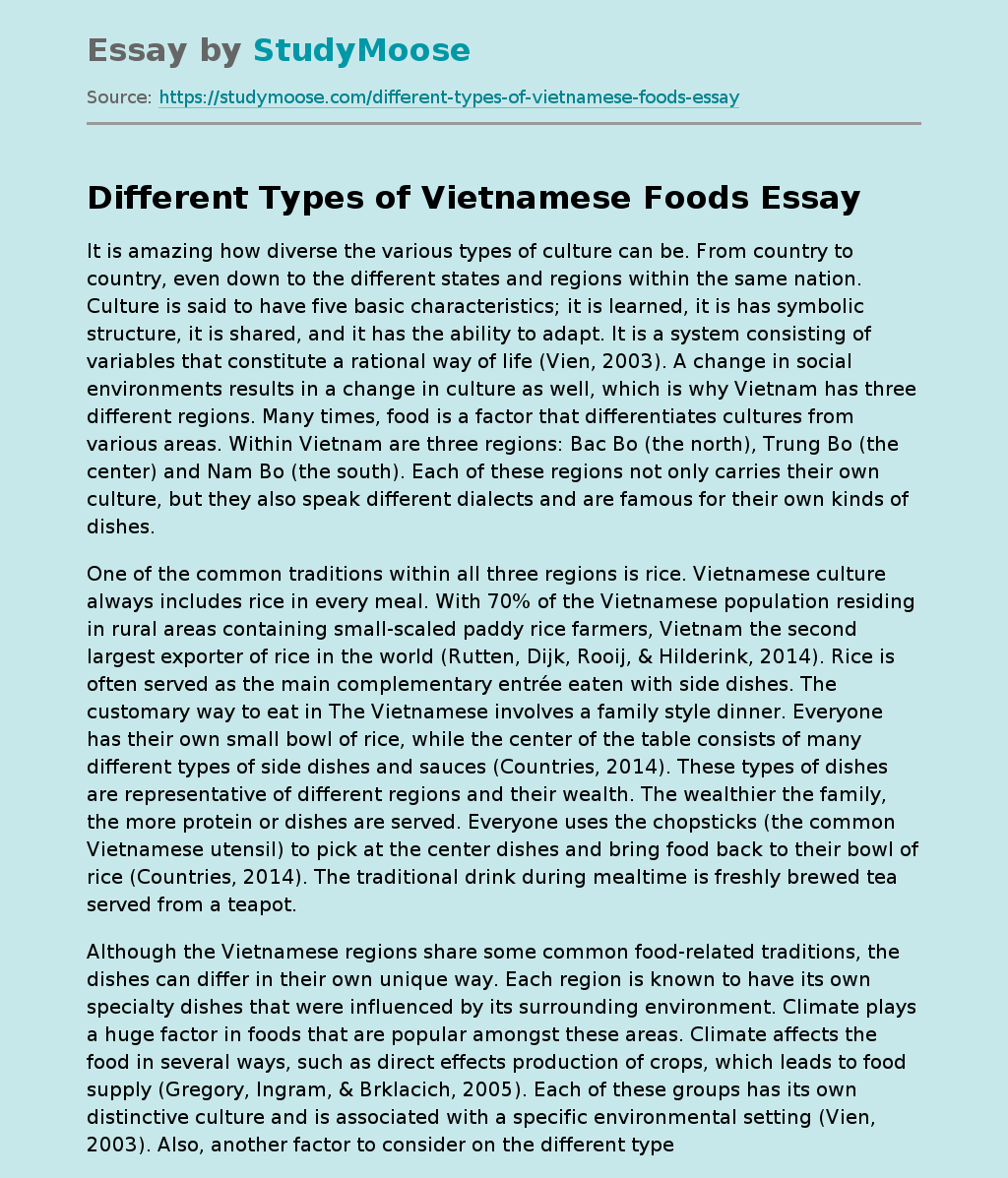