I did my research paper on the difference between high school, college, and professional basketball. My senior project was on a 3rd-6th grade basketball camp. The reason I did my paper on the differences is because it relates to how the different age and ability levels affect the outlook of the sport. As an individual transitions from high school to college and then to a professional level, one may come to realize major and subtle differences in each level that is experienced.

Don't use plagiarized sources. Get your custom essay on
“ Different Levels of Basketball ”
Get custom paper
NEW! smart matching with writer

James Naismith invented the game of basketball as something to keep men occupied. It has changed a lot from then to now.

It was first played with a peach basket with no hole in the bottom. There were no backboards. There was no 10-second line, three-second violation, and no frontcourt and backcourt lines. But the greatest difference between Naismith’s invention and basketball as we know it today was that in the thirteen rules, there were no provisions for dribbling.

He said the game could be played with as few as three or as many as forty players on the court at the same time. Naismith didn’t want a soccer or lacrosse goal because indoors, nine men would line up in front of the goal and it would be impossible to score, so the goal had to be elevated.

The 10-foot height on the baskets came about because the first peach baskets were attached to the edge of an elevated running track that happened to be 10 feet.

And for 108 years, as players have grown to seven feet tall and beyond, the height has not changed. On a high school level it differs from college and professional because, in high school you have a drive and inspiration to do it. High school athletes do it because they like the game and its fun. Some kids look at it as an opportunity to do something with their life.

Basketball wasn’t made for how it is now. High school basketball should be fun but coaches’ have changed it into seriousness and hard work. High school basketball players look up to college and professional players as role models. Role models to them give them a drive to play the game also, wanting to be like someone can give you all the inspiration in the world. Basketball in high school can make you a better person, gives you work ethic, and it can change your mind on bad decisions. Mostly understanding the game can make you a better player.

The love of the game when you’re in high school can also make you want to pursue a career in the sport. The benefits of the game have changed a lot. If your grades aren’t up to par but you’re a great basketball player coaches will help you, even college coaches will do all they can to get you to come to their school. Prep schools are meant to prepare kids for Ivy League colleges but players use them for athletic purposes. Public school seniors who aren’t getting looked at by division 1 schools go to prep schools for a 5th year in high school.

This will give the player more exposure and a chance to get better, stronger, and increase there game. The trend of basketball-centered schools gained momentum when Tracy McGraddy (an NBA all-star) jumped from Mt. Zion Christian Academy, a prep school, to the NBA. Students who come from top of their high school class may be shocked to realize that their college classmates have the same academic and athletic ability. College is way different from high school. In a school were you might have been the best, now you’re going to college were there are many people around just as good and better.

That is a huge change, the practices are so much harder, they won’t take it easy on you, there paying for your tuition so you have to earn it. The magnitude of college is different from high school because, you’re playing in a gym with maybe 10,000 people watching you. You’re on television now playing the sport you love, with tons of pressure on you. You will go up against some of the best college athletes in the game. College basketball is moving at a faster pace then high school, which is why they work you so hard to get faster, stronger, and to develop more technical skills.

Now you’re living on a campus full of distractions, wanting to go to parties but there’s practice in the morning, or having to split time with school work and practice. You really have to be dedicated to the sport to play in college. Now this is the time were you have to be focused on the game. This is the working out, eating the right meals, no drinking, and getting to sleep at a decent hour. You may not have had to do this in high school but for your health it should be a requirement if you plan on going far.

In college you really have to perfect your game, it’s not about fun anymore it’s about competition, going head to head against your opponent, and pursuing a career in the game. Since you have to be a certain age to enter the NBA draft, kids are going to college for a year then making the jump to the NBA. Athletes are taking this very seriously; as if they need to win, need to be the best, this is were making the game a profession comes in. They don’t want to let there family and friends down. One of the biggest events a college basketball player would like to take there team is to the NCAA tournament.

The Final Four and the Championship game are the two biggest events in the NCAA. So if a player and his teammates can make it there, NBA scouts will be looking at them. The NBA is one of the biggest jumps you could make in your career of basketball. If you can make it to the NBA you are considered a great player. Even if you didn’t get off the bench, you made it to the NBA. There are nearly 550, 000 basketball players, about 50 make it to the NBA. So if you are one of those 50 you’re considered a great player. Now you’re entering a business.

NBA players are getting paid up to 10 million dollars a year. That is the biggest difference from high school and college. You’re considered a role model now, kids look up to you. You have in image to uphold, if you do something wrong and are on the news, your image is ruined. The NBA had the greatest basketball players of all time, Michael Jordan, Larry Bird, Earvin “Magic” Johnson and others still playing. Those are players you have to look up to try and be like them, even though you’re in the NBA that doesn’t make you the greatest.

The NBA is entertainment; people watch it because it entertains them. Fans pay a lot of money on NBA players yearly. Buying there jerseys, paying for tickets, and betting on games. The most obvious distinction between the NBA and the NCAA is the number of teams. The NBA is made up of just 29 teams were as college is made up of 200 teams. The NBA plays an 82-game schedule. Playing more games against fewer teams creates a dull sense of sameness for most NBA teams, thus while college teams rarely lack enthusiasm or motivation.

Usually college teams play only twice a week, so fatigue rarely is a factor. But NBA teams may play as often as four or five games in a week. Talent or lack or it also plays a role in the difference between the NBA and college basketball. Even the worst team in the NBA occasionally can beat the best team in the league. This is why each level is different. As an individual transitions from high school to college and then to a professional level one may come to realize major and subtle differences in each level of basketball that is experienced. 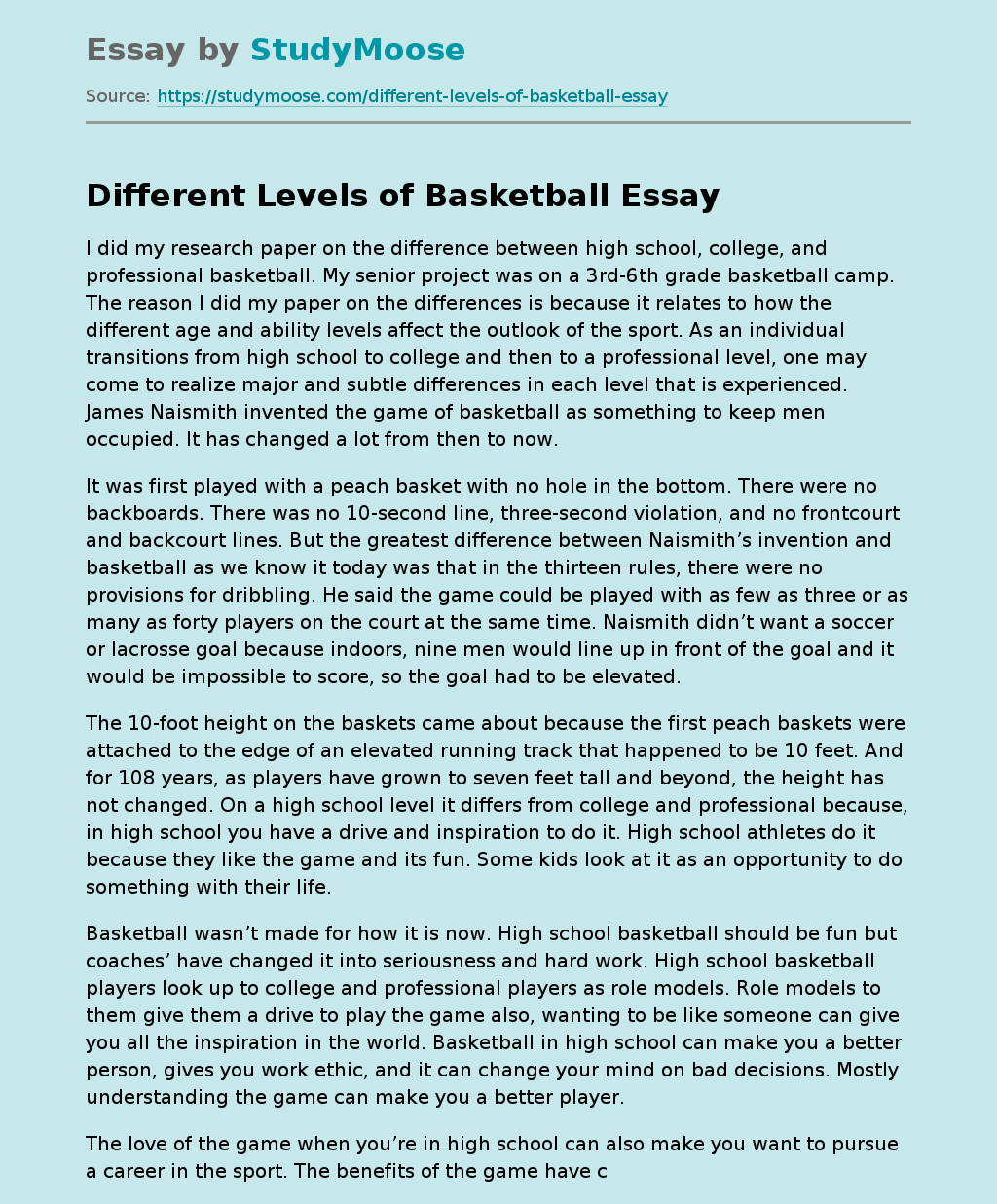