Different Cultures of Europeans and Maori

Analyse the impact of European contact in Māori between 1642 and prior to the sighing of the Treaty of Waitangi in 1840. Between 1642 and prior to the signing of the Treaty of Waitangi, many European traders and missionaries arrived, bringing changes for Māori. They impacted the Māori society and introduced many new things to the Māori like pigs, muskets, tobacco and alcohol. Missionaries also influenced Māori and introduced Māori to Christianity and to the written language. Europeans changed the lifestyle of Māori, civilised Māori and taught them farming skills and new types of agricultural cultivation.

Don't use plagiarized sources. Get your custom essay on
“ Different Cultures of Europeans and Maori ”
Get custom paper
NEW! smart matching with writer

The Europeans influenced the Māori trade. Pre European trade took the form of gift exchange with an obligation to reciprocate with an equal or better quality gift. Inland tribes often traded with costal tribes because the costal tribes had more fish and seafood while inland tribes had more meat and plants. Also, inter-island trade between the North and South was important.

Traders in flax, muskets, blankets, tobacco and other products were present from the early 1830s. With the Europeans, it was the same gift exchange style with expected reciprocation. Goods with a relatively similar value were exchanged at the same time. The Māori started to realise the value of nails as chisels as they started to request them in return for goods they already had. Also, flax was wanted by the Europeans because it was soft, durable and strong. European explorers visiting New Zealand in the 1700s quickly saw the usefulness of flax.

Flax could be used to make rope for rigging on sailing ships and many other purposes. Māori made flax ropes for visiting ships and bartered flax and weaving for European goods. This exchange of products helped bring Māori and Europeans into close contact with each other for the first time.

However, this made most tribes move from their traditional homelands to be closer to trading posts and to the swamps where flax grew. The Māori were normally paid with alcohol, tobacco or muskets exchange for flax. Because of this, the Māori put most of their time and effort into cultivating flax and they didn’t grow enough food for their tribes. Due to this, the Māori population dropped significantly. The missionaries also brought a lot of change to the Māori culture because they brought Christianity to New Zealand. They civilised Māori and they changed the lifestyle of Māori. They taught Māori how to read and write and changed the Māori language to a written language. Missionaries also acted as a mediator between the Māori and the British Government because the missionaries normally stayed for about a few years which meant they became fluent in Māori and could negotiate between the two parties.

The missionaries discouraged the use of muskets as muskets caused death and destruction, but the Māori didn’t normally listen to them. Europeans introduced the musket to the Māori. Before the arrival of Europeans, warfare was ritualised and it was mainly a non-violent affair. The victors of the war would gain goods and other things and the loser would normally migrate to a less desirable area. However, when muskets first appeared, the first muskets were slow to reload and less effective than the trained warrior with the traditional weapons. Muskets were originally more valuable for the purpose if utu and for executing prisoners. The first muskets were of little use to the Māori because they didn’t know how to use them. Muskets that were sold to Māori were often old and of poor quality.

They were also extremely expensive – for example, in 1820 one musket cost 200 baskets of potatoes or up to 15 pigs. At first, the muskets were used more for creating fear in the enemy than actually killing anyone. Tribes acquired hundreds of muskets and they used it for war. They wanted to focus on producing goods to trade with Europeans in order to pay for the weapons. However, musket ownership was most significant when a tribe with muskets fought against a tribe without muskets.

The arrival of the Europeans caused many changes to the Māori society between 1642 and prior to the signing of the Treaty of Waitangi. The Europeans brought with them many things to trade; however, they contributed to fatal impact in New Zealand as they brought with them weapons which killed a lot of people and enslaved many more as more and more Māori competed for weapons. By 1830 the Māori had learnt a lot about the world. They had learnt the skills of trade with Europeans and the Māori had missionaries that taught them how to read, write and communicate with the outside world. New Zealand was no longer an unknown and isolated land mass.

Different Cultures of Europeans and Maori. (2016, Apr 23). Retrieved from https://studymoose.com/different-cultures-of-europeans-and-maori-essay 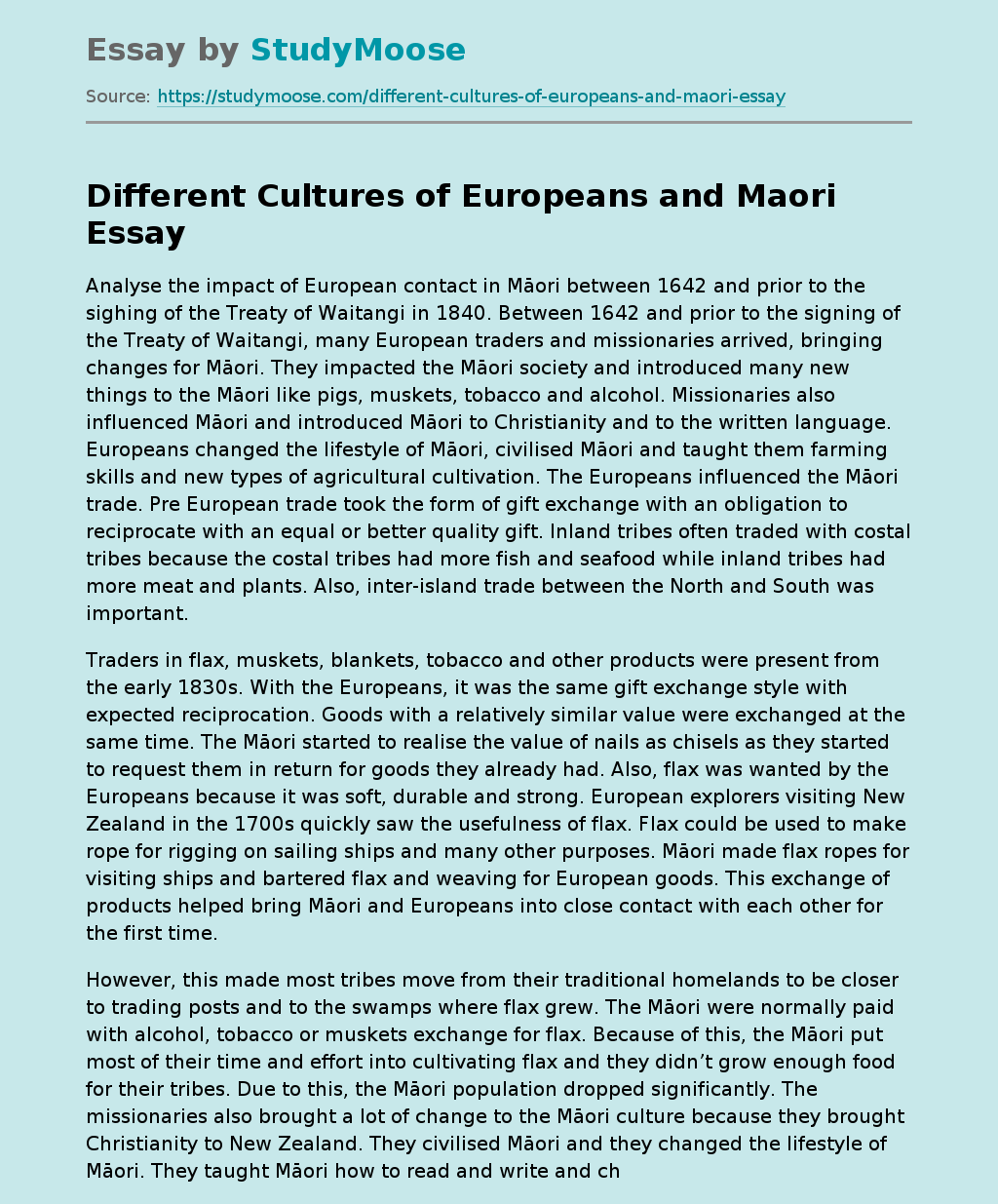