“Different cultures have different truths. A truth is that which can be accepted universally. ” What are the implications for knowledge of agreeing with these opposing statements? Cultures can be defined, in a narrow sense as concept of civilization, the refinement of mind including education, literature, language and arts1. An alternative meaning of culture is fundamental human processes such as thinking, feeling, acting, greetings, eating and many others2.

To simplify the meaning of culture, it is a set of distinctive spiritual material, intellectual and emotional features of society or a social group and is added to art, literature, lifestyles, and way of living together, value systems, traditions and beliefs.

Don't use plagiarized sources. Get your custom essay on
“ Analysis Of Different Cultures Have Different Truths ”
Get custom paper
NEW! smart matching with writer

Therefore, different definitions of cultures reflect on the complexity of defining what it actually is. This means different groups of people in the society will have different theories and criteria for valuing human activity. The three levels of mental programming 3 illustrated that the basis of each individual personality is human nature which can be inherited and is universal.

Culture is then the next step that is learned by groups of people and is specific to them which gives each individual their personality. Truths are the central of all human intellectual activities. It can define what we are and what we believe in. This is why what is considered as truth may not be considered as truth for another person. Universal truths are truths that are accepted by the whole community. There are truths that have been proved throughout the history of mankind such people have accepted universally that it is true that the earth is round because you can go over the horizontal line.

So to know that different cultures have different truths and that truth is series of statement that is accepted by the whole community juxtaposes. The implications arise when people of different cultures are living together. This problem appears to be one of the major problems of our day. It is experienced in terms of language in Canada and Belgium, of religious in Ireland and India, of diverse ethnics groups and tribes in Balkans and in Africa and one of the very diversified immigrant populations in North America. One example of this can be found across the globe.

Four years old children in a Japanese preschool in Tokyo were introduced finger paintings by their teachers. They were seated 8 to a table and each table was fitted out with a large piece of paper and 3 jars of paint in primary colours. Together they produced one large painting at each table. A sharp contrast occurred when comparing to Western schools, where child’s individual product is labeled with his or her name and carefully carried home to be admired by their family. Adults in Japanese society appear to be slower to move children toward individual accomplishment than adults in Western cultures.

There is no right and wrong, true or false in this context. There is no measurement whether it is better to encourage individual accomplishment in the child’s early years or later on in their life because children all have to learn to become independent sometime during the courses of their life. Another example, involving issue of value judgments and cultural context is between the native Indians and the White American4. The whites feel that they are more superior because their children are more intelligent because their knowledge comes directly from books.

However, the Indians argue that knowledge from books is useless for living in their world. As Indians children that was sent to study at the white’s collages comes back as “bad runners, ignorant of every means of living in the woods, unable to bear either cold or hunger” “neither fit for hunters, warriors nor counselors” and simply “good for nothing” The learning culture for the whites is therefore different from the cultures of Indians one values knowledge from book but another values life experience and the ability to survive.

In the White’s world knowledge from book would help the whites with bookish intelligence survive but in Indian’s world they would not survive. The myth of genders between different cultures is a more extreme example of the implications to define the truths of each culture. In China, the preference of son has led to sex selective abortion, infanticide and child abandonment. Son preference is also due to deeply rooted Confucian traditions, and Chinese parents desire sons in order to make familial propagation, security for the elderly, labor provision, and performance of ancestral rites.

Many of them retain the ancient Chinese belief, stating that “many sons bring much happiness. “5 The question left behind is that can the preference of sons in Chinese cultures be justified? And can this cultural belief of Chinese people of be considered as truths? We encounter a problem when trying to answer the question. The Western worlds who believe that they are more civilized believe or know for themselves that it is wrong to kill babies. However, we can argue to a certain extent, isn’t the parent’s decision to make for what they want to do with their babies?

The problem lies with in the problems of overpopulation in China. Another aspect involved in this issue is religions; Christianity plays a major role in Western cultures. The belief that children are blessing from God therefore opposes directly to the Chinese culture of infanticide. However, one can argue that infanticide is not a culture practiced by the Chinese but it is the consequences of son preference in the Chinese culture itself. However, one may argue that new generations of Chinese people are starting to oppose or question the truth in their culture.

Although the reason for this view is due to their knowledge of different cultures which gave them different views which in turn develop in to beliefs. Personally, I feel that preference of sons in Chinese culture cannot be counted as truth because it is not accepted universally by all people in the community. The difference between the beliefs of people who share different religions is also a big issue to explore. Belief is when a person accepts that something is true with or without proof. This is therefore very a personal feeling and is subjective to each individuals

The implications of the two opposing statements can just simply be ignored or eliminated if people appreciate and accept the different values in the different cultures. Social peace can then be established when all individuals and members of groups are able relate or be related to each other in a positive manner. 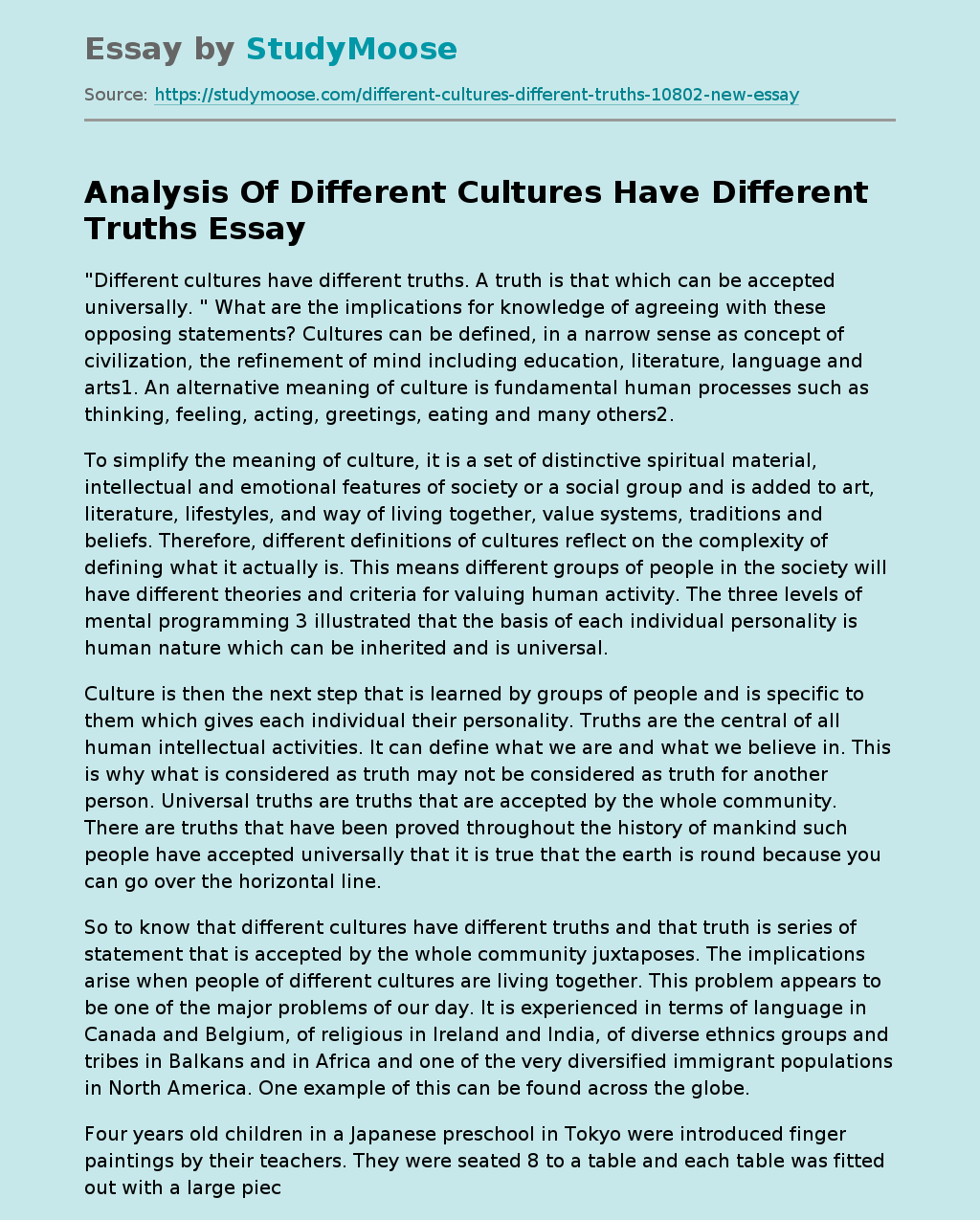