Different businesses and their ownerships

I have chosen Topshop and Oxfam as my two contrasting businesses. Topshop is a young girls and women’s clothes shop. This business is international and has stores all over the country.

Turn in your highest-quality paper
Get a qualified writer to help you with
“ Different businesses and their ownerships ”
Get high-quality paper
NEW! AI matching with writer

Topshop has 300 stores they are still growing and expanding. The owner of Topshop owns other retail shops like Miss Selfridge and Dorothy Perkins. Topshop is part of Arcadia, a public limited company is owned by shareholders, which may be members of the public. Their shares can be bought and sold on the stock exchange. Topshop is run by a board of directors. These people make the major decisions within the business.

They have limited liability; this means if the business gets into debt and cannot pay it, the business will get sued. This is known as incorporation. The shareholders’ personal assets cannot be taken to pay the debt; they are then only liable for how much they have invested in the business. The purpose of Topshop is to sell range of clothes for the public to buy, also to make profit. Oxfam is an international charity that was founded in 1942 in England. This organisation provides help to poor countries and disaster affected areas.

The purpose of this contrasting business is to help people rebuild lives working on long term projects with communities determined to help ensure they have a better future.

Topshop have their own aims and objectives, their aims are:
Profit and profit maximisation – they want to make as much profit as they can
Survival- they as a business want to be able to survive within the clothes industry and not fail because other businesses similar to them are opening up. Growth- they also want to be able to grow and expand their business and set up more stores in different part of the world to maximise their profit.

Their SMART objectives are:
SMART stands for Specific, Measurable, Achievable, and Realistic, time Constrained. Their objectives are
Specific because Topshop will only aim to focus on clothing and fashion accessories particularly directed at women. Measureable in this context will mean that Top shop’s market share can be easily assessed and get to know of their changing needs and wants. Achievable because their business strategies can be stretched to achieve the desired market share. Realistic would be whether they are actually achievable or not. Time constrained will mean they will achieve all the objectives by a certain time.

Oxfam also have their own aims and objectives, their aims are:
Oxfam’s aims are:
To help people in poor countries and relieve poverty
Help provide education for people who are in need of it
They take donations like toys and clothes, and then they sell on for money and all the money goes to that charity.
Raise money and encourage charitable giving.

The businesses aims are set to please the customers and live up the customer expectations. The customers of Topshop expect high quality and value for money clothes and products. They also expect the latest fashion trends and to look good in them as they are paying so much. Topshop as a big clothing shop are aiming to make the working conditions better for the people that are producing their products so then the customers know the clothes have been made in good working conditions which is a benefit . If the customers at Topshop didn’t get what they wanted, they could go elsewhere. Therefore customers have an influence over how Topshop run their business.

Topshop need employees to help the business to expand and open a range of stores. Employees can influence Topshop by contacting their trade unions if they’re not happy with their working conditions. Their point of view would be to make sure they have good rates of pay, good working conditions, contract of employment sick pay and holiday entitlements.

For Topshop to make enough profit to keep the business running, they will need suppliers to be able to buy products and sell them to customers. Without suppliers the business wouldn’t survive.

It’s an organisation which supports workers when they are in disputes with their employees over the rates of pay they are getting or working conditions they are in. If the manager of the business does not agree with the trade unions or employees then Topshop could lose staff over this. Local communities

The community may shop in Topshop as it’s the closest store to them. This will influence Topshop by having local customers who may always have a quick look in their store when they have time. This will increase profit for Topshop.

They make all the laws which Topshop have to stick to. This means if they don’t stick to these laws they could get fined and loses customers over. In conclusion, some stakeholders will have a much bigger influence compared to the others. For example staff could go elsewhere and find a new job and work there instead. Oxfam’s stakeholders

Customers in Oxfam will buy products and the money made will go to the charity then gets passed on the people to provide them with foods, clothes etc. If Oxfam didn’t have customers then they wouldn’t be able to raise money and help people that are in need of education, clothes and food and water.

Oxfam needs employees to help the commerce to expand its self and open more stores up around the world. Also they would need staff to help achieve their aims and objectives. The employees that work at Oxfam are volunteers and they don’t get paid. If they don’t have employees then the business wouldn’t be able to raise money for the charity.

They have two types of suppliers, members of the general public who donate second hand goods. They influence Oxfam because if they didn’t donate to this organisation then Oxfam as a charity wouldn’t be able to stock their shops. The second types of suppliers have medical supplies which help people in third world countries.

Oxfam is a charity and as such does not have owners but trustees who help to keep the organisation on track with its aims and purpose. Local communities-

Local community donate and buy goods from the charity. They influence Oxfam because they buy goods of them and if they didn’t Oxfam wouldn’t be able to achieve their target of making money to give to that charity.

If Topshop introduced clothes that did not meet their customers’ expectations then sales would decrease and Topshop would not be able to achieve their aims and objectives as they wouldn’t be making enough money to make a profit. Employees that work in Topshop have an influence on the businesses aims and objectives because if they didn’t have employees to work in the stores then they wouldn’t meet their aims and objectives as a business because people have any to buy the product off. Also employees are needed widely for expanding the business to different part of the world and opening more of the stores. The government also have a big influence on Topshop’s business aims and objectives as they make all the laws for not only that business but other businesses too and if the business doesn’t follow or stick to those rules then they will get fined and could have a bad reputation created which would have negative influences on them as current customers may be put off buying products from them and go to one of their competitors close by like New Look or River Island.

Customers are very important in the influence of Oxfam’s aims and objectives as the business wants to have second hand goods handed in from the customers and then people will buy the second hand goods if they know the money is going to charity. If the customers weren’t coming into the charity shops then this would affect their aim to raise money because there is no-one to buy the products. Overall, I know that within the two contrasting businesses I have described above, they both have a number of different stakeholders that have an influence on their businesses aims and objectives.

Different businesses and their ownerships. (2016, May 30). Retrieved from https://studymoose.com/different-businesses-and-their-ownerships-essay 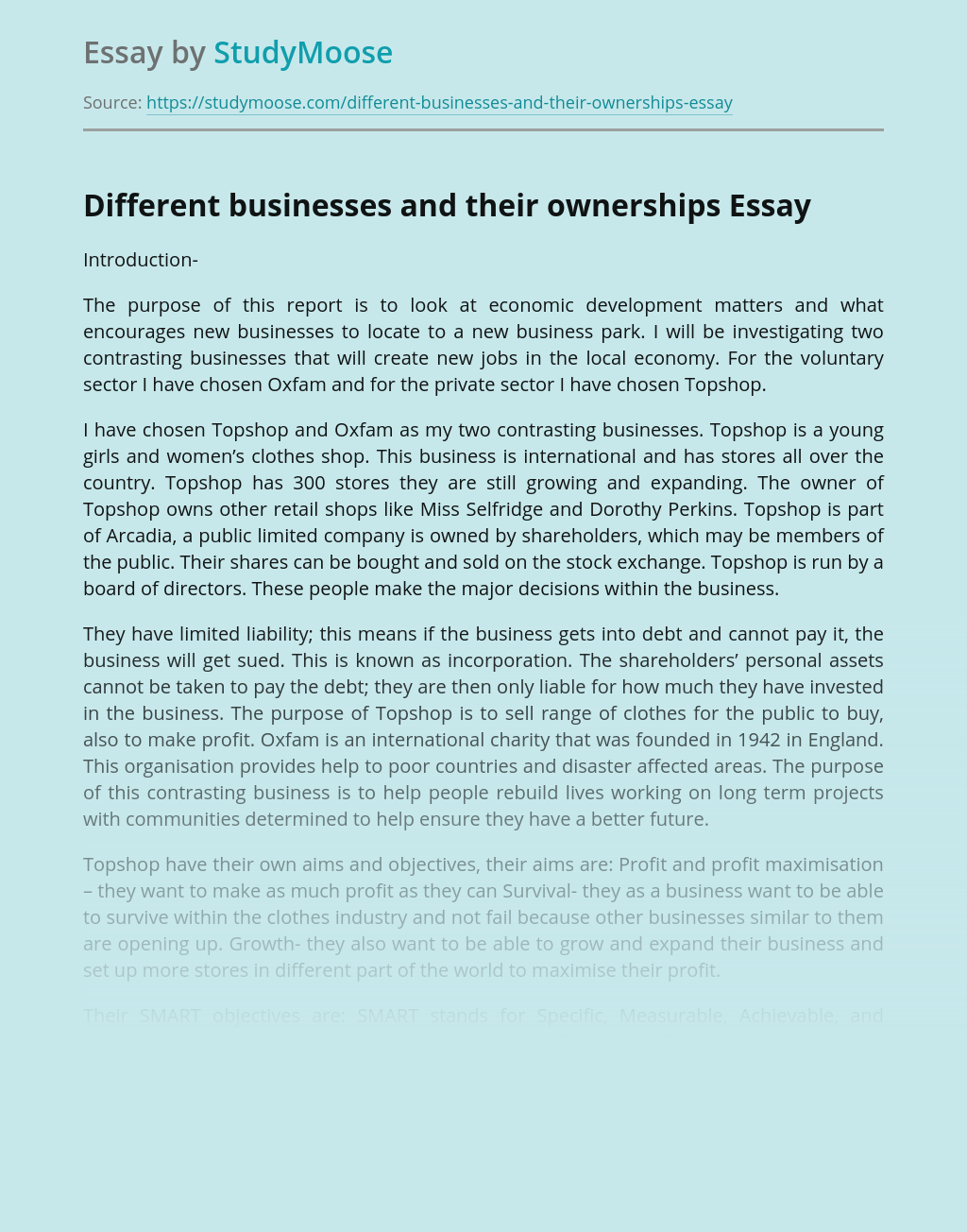 Turn in your highest-quality paper
Get a qualified writer to help you with
“ Different businesses and their ownerships ”
Get high-quality paper
Helping students since 2015
Stay Safe, Stay Original