Career indecision and certainty have always been part of every people whether they are fresh grads or just started their college years. Many, if not all of us, wanted to be respected professionals in our own chosen fields. We want to be the best that we can be and eventually earn much for our families. But like any other people, there are those that cannot fulfil their dreams attributing it to financial restraints, nagging and controlling parents and Jonah complexes.

Asian countries such as the Philippines still put a high regard to meeting the family’s expectations which usually conflicts with their personal career choices.

Don't use plagiarized sources. Get your custom essay on
“ On Differences in the Influence of Pareer Career-Related Behaviors on Outcome Expectations and Career Decision Certainty ”
Get custom paper
NEW! smart matching with writer

With the family elders deciding which career one should be in, younger ones are in for a messy college life. The society also contributes to the vortex of indecision of every student. Historically speaking, men were and still given much career opportunities as compared to the women. In fact, men were the only ones allowed to work in the mainstream society while the women were left at home tiring their lives out wringing out clothes and cradling their tots.

It was highly frowned upon to hear women taking on male-dominated jobs which usually are within the pure and physical sciences spectrum where logic is required. It was only in the 1800-1900s where the society began to accept females into the think tank department. The article was just another of the proofs that parental intervention directly influences and limits career choices. It said that maternal support increases the likelihood of career decision certainty for both sexes.

This is consistent throughout time because people still value what their mothers think about their decisions being their primary caregivers. Where fathers do not hesitate to let their sons to take up science, technology, engineering, and mathematics (STEM) courses, they become highly critical towards their daughters. Nowadays, however, things began to change as women are empowered and given freedom to their careers. With the growing number of females in the STEM fields, the number of females taking up science courses also increases at the same time, parents and families are giving out their consents.

It is also inevitable that some science courses particularly of or relating to medicine gives out relatively higher incomes as compared to others especially in the Philippines where people are literally everywhere. Although parental support comprise the chunk of the decision, some people resort to working part time to support themselves if ever their parents do not approve of them even after long hours of taking it out. Nowadays, parents encourage their children to take up science courses with the hope of a better future provided that they could afford them or else.

On Differences in the Influence of Pareer Career-Related Behaviors on Outcome Expectations and Career Decision Certainty. (2020, Jun 01). Retrieved from https://studymoose.com/differences-influence-pareer-career-related-behaviors-outcome-expectations-career-decision-certainty-new-essay 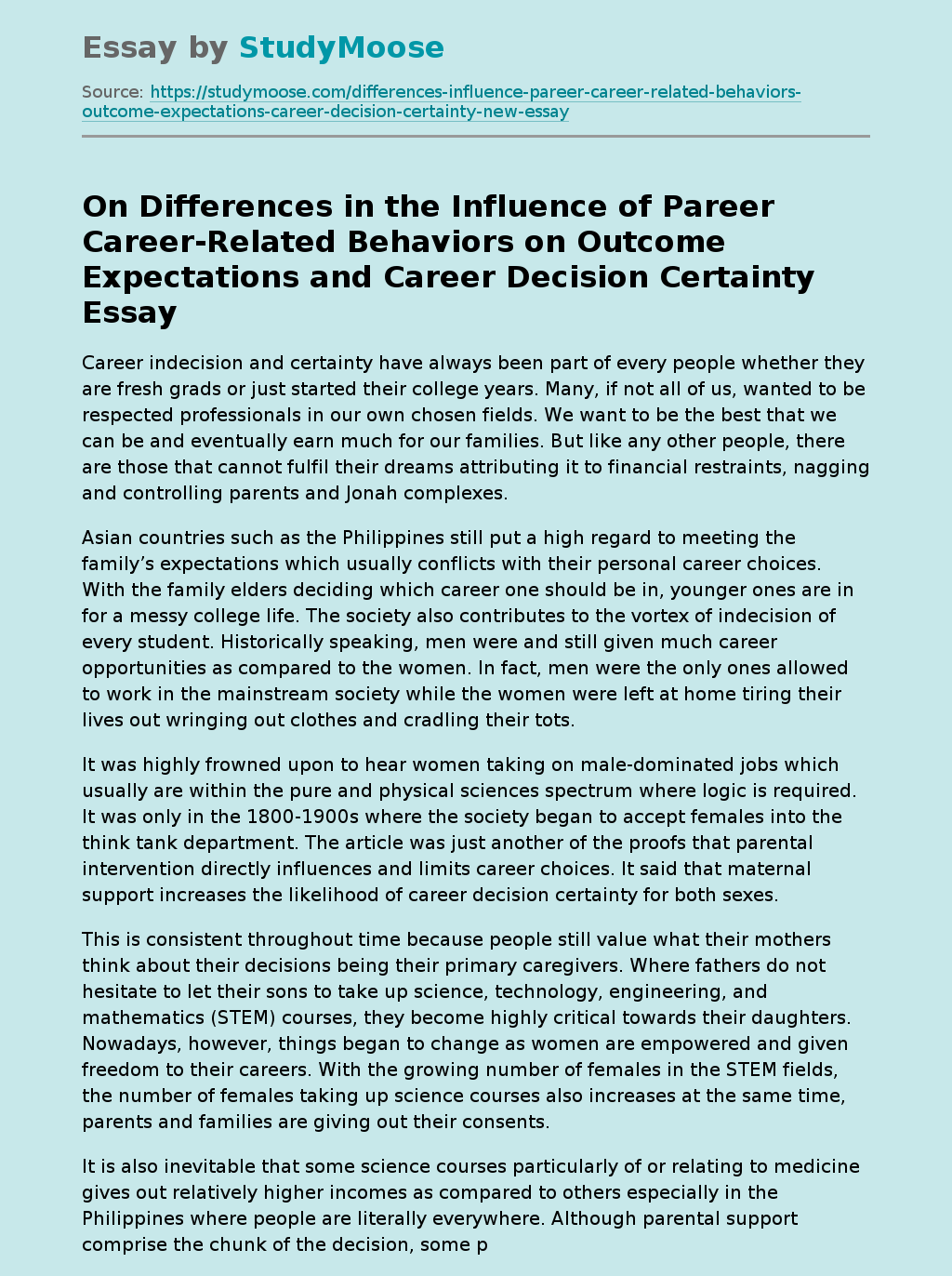