Difference in Gothic and Romanesque architecture

Different Architecture of Romanesque and Gothic Inspired Buildings There have been numerous pilgrimages made across France and Spain, each one just as unique as the one before it. Along these routes there are an immeasurable number of magnificent churches and temples each with their own history, architecture and art work, making them very distinctive. Time and place are important influences of the design of these churches and temples when they were built; this means that we have encountered scores of distinct architectural types along our pilgrimages.

Don’t waste time
Get a verified writer to help you with Difference in Gothic and Romanesque architecture
Hire verified writer
$35.80 for a 2-page paper

I will examine as well as compare the similarities and differences of two types of architecture from the middle ages called Romanesque and Gothic. Romanesque and Gothic architecture differ in many ways from how the exterior looks to the mood on the inside to the sculptures, arch types and the clerestory. The two architectural types are different because they were influenced by the different forces surrounding them at the time.

The periods in time when these architectures were being defined played an important role in the outcome.

I will look closely at two churches while also touching on other churches that we have discussed this semester and compare their features.

“The walls of Romanesque buildings are often of massive thickness with few comparatively small openings”.2 Having thick walls and small windows, the castles were almost impenetrable however this meant the design of the churches were relatively simplistic when compared to Gothic buildings. When we look at St Sernin we able to identify these features. There are numerous windows around the church however as St Sernin is a rather large Church you would expect to see more windows with other styles of architecture. The front of St Sernin has one large round window but the rest of this facing is mainly stone with few relatively small windows. When we compare this to Gothic architecture we can see a significant difference. When Romanesque architecture evolved into Gothic architecture the arches were no longer just for sustaining the weight, they became more visually appealing. Gothic architecture came to be because of “a unique combination of existing technologies…

Those technologies were the ogival or pointed arch, the ribbed vault, and the flying buttress”.3 These new technologies meant that the exterior walls could be thinner and have more windows as the weight of the roof and upper levels were better distributed through clustered columns. Having lighter walls and more windows and openings led to more decorative and visually stunning buildings considered to be works of art. Notre Dame Cathedral is an impressive work of art which uses all the new technologies in displaying one of the finest examples of Gothic architecture. The facade of the cathedral is high and well decorated. There is a magnificent round window which is the centre piece of the face which is surrounded by countless pointed arch windows designed to support the weight. Unlike the church of St Sernin where most of the front wall was stone, Notre Dame’s front wall consists mostly of windows. These exterior features had a significant impact on the interior feel and mood of the buildings. The amount of light let in by the two comparative architectural types has a lot to do with the feel and mood of the interior. When entering different buildings one “can feel the difference between the [two types of] architecture”.4 When it comes to the Romanesque style of St Sernin, very little light is able to penetrate the thick walls with little openings which makes the interior mood feel dark and gloomy. When you compare that to the Gothic Notre Dame, with its numerous windows it has a completely different feel. Instead of feeling dark and gloomy like St Sernin, Notre Dame’s interior has a much lighter and a more inviting mood. ]

Another defining feature of Gothic architecture is one of the new technologies, the pointed or ogival arches. This new way of carrying the weight was revolutionary as costs could be cut by having more glass and less stone work. Structural “use of the pointed arch gave a greater flexibility to architectural form, it also gave Gothic architecture a very different visual character to Romanesque”.5 These arches meant the ceiling could be made higher than before symbolising an aspiration for heaven. All Gothic openings such as windows, doorways and galleries are made with pointed arches. The church at St Sernin is no exception to this rule. Looking at the outside of the building all you can see is pointed arch doors and windows. It is the same once you have entered the building, pointed archways running down both sides of church. Compared to Gothic architecture, Romanesque architecture was an outdated technique when it came to efficiency. Romanesque design wasn’t as advanced, instead of using efficient pointed arches like Gothic designs; rounded or semi circle arches were used for their arches. This is more efficient at holding weight than a square doorway but not as efficient as a pointed arch. To overcome this weakness of the rounded arches “instead of a single round arch of stone to span an opening… [they use] multitudinous arches”.6 This way the weight load is spread over numerous arches instead of a single arch. When we look at the church in St Sernin the doorways and windows are all rounded. The main entrance has two large rounded doorways, when we look closely we can see it isn’t a like the other arches, to carry the weight they have made the arch wider than the wall coming out a few feet. When we go inside we can see that on top of the rows of columns on the interior there are rounded arches, even the roof is a rounded arch which is supported by moulded arches.

Sculpture work that exists on the inside and outside of churches had two purposes. Intricate sculpture works on the churches were visually appealing making them more attractive to pilgrims and tourists and it was also a way of storytelling that was guaranteed to last as long as the church. Romanesque sculptures evolved over the years having three distinct periods. A primitive period, the second period was marked by baroque exaggeration and the final refining and assimilating period.7 This style of sculpture work often depicts scenes of everyday life including both people and animals. While the scenes of the sculptures rarely altered, how they were depicted was. In the second period “[g]rotesque figures of men and animals, and designs derived from vegetable kingdom”8 were common. As we move into the third period depictions are more realistic. At St Sernin there is an abundance of Romanesque sculptures carved into the south portal. It is an early piece of Romanesque sculpture work as the subjects of the art work are all regular in appearance. Over the south portal is a scene of Christ with the twelve apostles below looking up at him. This was a common enough depiction of Christ in Romanesque design, a very similar piece had been carved on a different church carved twelve years earlier.

The end of the Romanesque period flowed smoothly into the new Gothic style of sculpture work. While it continued the “tradition of Romanesque sculpture, but it changed in its iconography … tending towards a didactic representation of the most important persons and scenes in the Holy Scripture”.9 Other common themes are the twelve months and the signs of the zodiac, angels and saints. Gothic architecture took the already existing Romanesque architecture and channelled this into a more comprehensive and calculated work of art with the ability to touch any individual that gazes upon her art and for individuals who understand Gothic sculpture have a deeper appreciation. The façade at Notre Dame Cathedral has three magnificent doorways, and above the centre doorway is a great depiction of Christ created using a Gothic sculpture style. Christ is standing surrounded by an eagle, bull, lion and a winged man. Visitors are able to enjoy this work for its quality although those who understand the piece realise that the eagle represents Saint John, the bull represents Saint Luke, the lion represents Saint Mark and the winged man represents Saint Matthew. Gothic and Romanesque architecture dominated the middle ages used to create magnificent churches, temples and castles considered to be works of art. Romanesque architecture evolved into Gothic architecture during the 12th century.

Difference in Gothic and Romanesque architecture. (2016, Mar 02). Retrieved from http://studymoose.com/difference-in-gothic-and-romanesque-architecture-essay 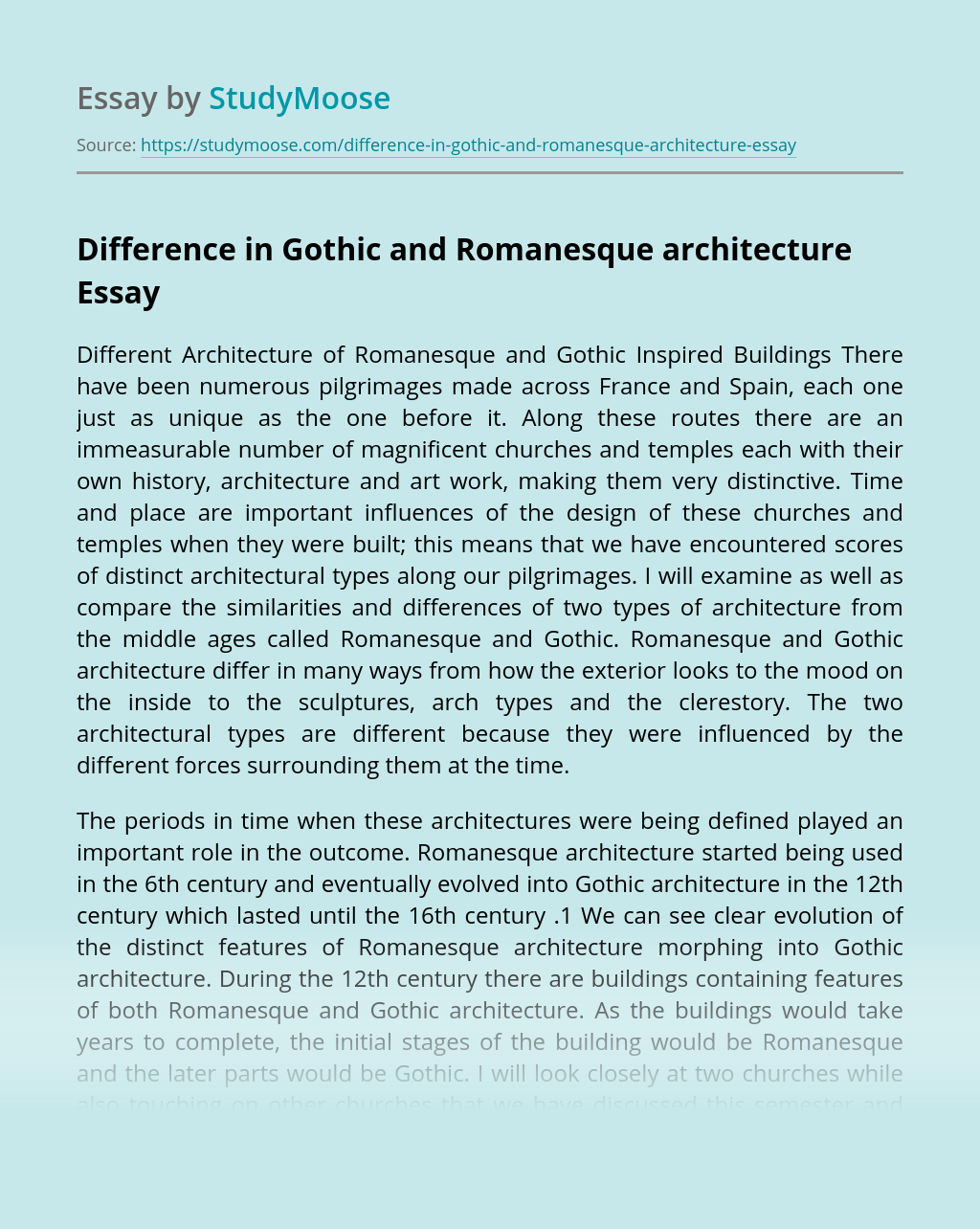 Don’t waste time
Get a verified writer to help you with Difference in Gothic and Romanesque architecture
Hire verified writer
$35.80 for a 2-page paper
Stay Safe, Stay Original