One of the main things that could be compared between factory workers and slaves is the different working conditions that the two had and how they all suffered. Even though the factory workers were inside a building they suffered a great deal. The early factory system did not share its benefits evenly with every one. The owners grew plump with all the profit that they made, while the workers wasted away. All the workers were forbidden by law to form any type of union that would raise wages.

Don't use plagiarized sources.
Get Your Custom Essay on Difference Between Slavery and Factory Workers Just from $13,9/Page

This type of activity was considered to be criminal conspiracy.

In the factory the people who were the most vulnerable to exploitation were the children. In 1820 a large portion of the industrial workers were children under the age of ten. These children some times got brutally whipped in special whipping rooms that the factories had. They were also mentally blighted, emotionally starved, and physically stunned. In the year of 1791 in the mill of Samuel Slater the workers consisted of boys and girls all under the age of twelve.

The condition of the slave was a little different then the conditions of the factory workers. Majority of the slaves in the south worked in the cotton fields, which in 1840 accounted for half the value of all America exports. The slaves planted and picked all the cotton that formed the foundation of the 19th century, and the southern economy. Now since the slaves were exposed to the elements all the time a large portion of them was wiped out because of sickness and disease. Slavery rooted from racism and economic exploitation.

In my opinion to call a factory worker back then a wage slave is a correct term to use for them. They were slaves in a factory. A large number of those workers were children under the age of ten, and some times they got brutally wiped. The workers were not allowed to form a union so obviously they were under paid and over worked.

Difference Between Slavery and Factory Workers. (2016, Jun 04). Retrieved from https://studymoose.com/difference-between-slavery-and-factory-workers-essay 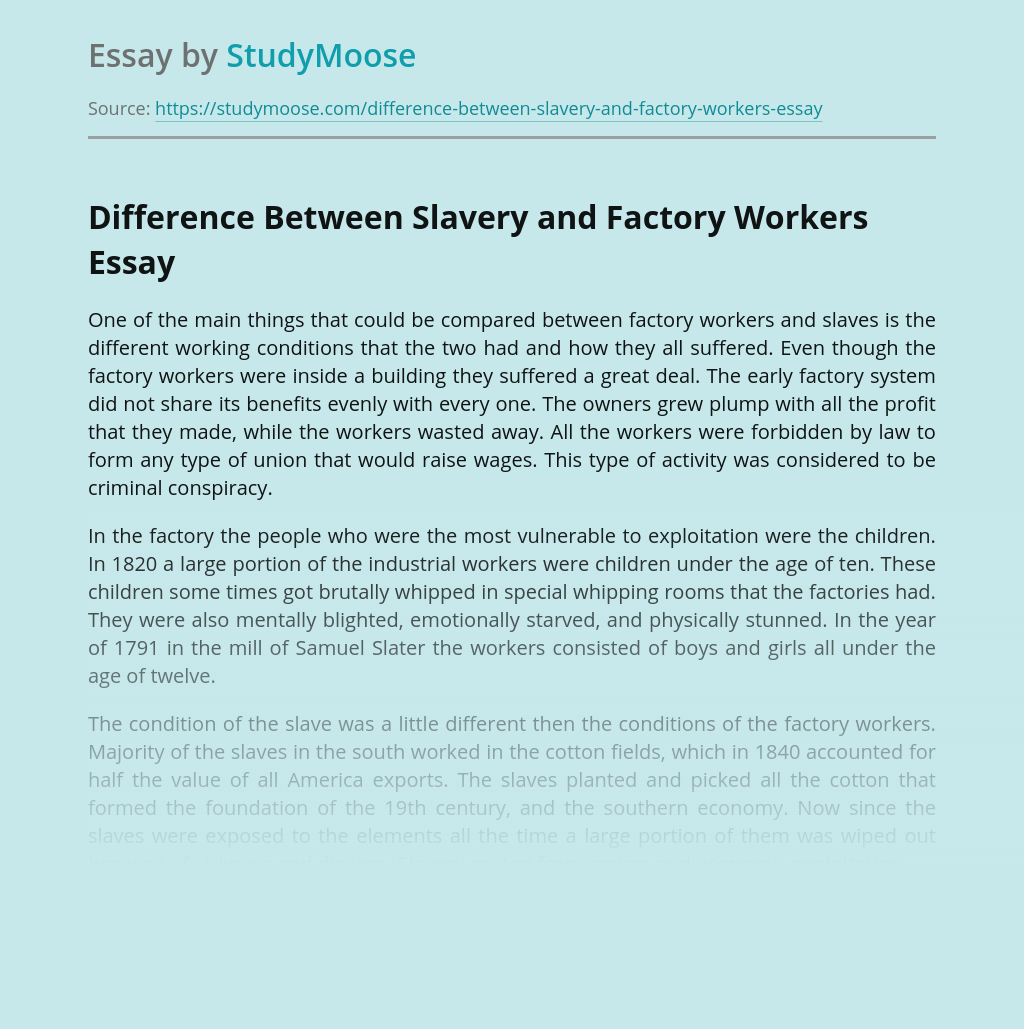 During the century and a half between the arrival of twenty blacks in Jamestown in 1619 and the beginning of the American Revolution in 1776, slavery—something that had never existed in England itself—spread throughout the English colonies, from Virginia it would make its way south into the Carolinas and then out to the frontier, and... VIEW ESSAY

Introduction ‘Underground to Canada’ by Barbara Smucker is a captivating novel which tells the story of Julilly and Liza and their journey to Canada. The following essay will show how Smucker uses themes such as courage and determination to make the novel’s two central characters (Julilly and Liza) show remarkable feats of courage to escape... VIEW ESSAY

View sample
Get Essay
Cotton, Slavery and the Old South

The British initially became involved in the slave trade during the 16th century. By 1783, the triangular route that took British-made goods to Africa to buy slaves, transported the enslaved to the West Indies, and then brought slave-grown products such as sugar, tobacco, and cotton to Britain, represented about 80 percent of Great Britain’s foreign... VIEW ESSAY

Plantation crops and the slavery system changed between 1800 and 1860 because of the industrial revolution. After the Philadelphia Constitutional Convention, the Southern states were granted freedom to decide about the legality of slavery. At this point in time, the cotton production was very low and there were around 700,000 slaves in the whole country.... VIEW ESSAY