Diff between economics vs managerial economics

Don't use plagiarized sources. Get your custom essay on
“ Diff between economics vs managerial economics ”
Get custom paper
NEW! smart matching with writer

9. The scope of Managerial Economics is limited and not so wide as that of Economics

This is the cost advantage that a business obtains due to expansion. That is the factor that cause the average cost of producing a product to fall, as output of the product rises as explained in the ‘Dictionary of Economics’.

By achieving economies of scale, a company would have the cost advantage over its existing and new rivals. Further, the company could achieve lower long run average cost (i.e. productive efficiency). But if technology changes, this might alter the nature of costs in the long run, where it could allow small businesses to adapt new technology successfully and break into the established market segments.

Have you ever wondered why the price of a digital camera keeps falling, while the functions and performance are high? This is Economies of Scale, which brings down the unit cost of production and hence, passes this advantage onto the consumer through lower prices. E.g. for a supermarket getting 5,000 cartons of milk as opposed to just 100, is cheaper. That is, the marginal cost of delivering 5,000 cartons will be low compared to that of getting 100.

These are factors that make it cheaper to produce a range of related products than to produce each of the individual products on their own (Dictionary of Economics). When a company produces a wide range of products as opposed to specializing in one or few handful of products economies of scope occurs. For example, a company could expand its product range in order to take advantage of the value of its existing brands – this would exploit economies of scope. In industries, such as telecommunications, healthcare industry etc, the economies of scope has been realized. E.g. when fast food outlets product multiple food items, they enjoy a lower average cost compared to that of firms producing the same food. Because the common factors such as storage, service facilities, etc can be shared among the different food items and hence, reducing the average cost.

Returns to a factor:

1. All or at least two factors vary.
2. Factor proportion called scale does not vary. Factors are increased in same proportion to increase output.
3. It is a long-run phenomenon.
4. Returns to scale end up in decreasing returns.
5. Returns to scale can be attributed to economies and diseconomies of scale caused by technical and/or managerial indivisibilities, exhaustibility of natural and managerial resources, or depreciability of certain factors.

Diff between economics vs managerial economics. (2016, Aug 21). Retrieved from https://studymoose.com/diff-between-economics-vs-managerial-economics-essay 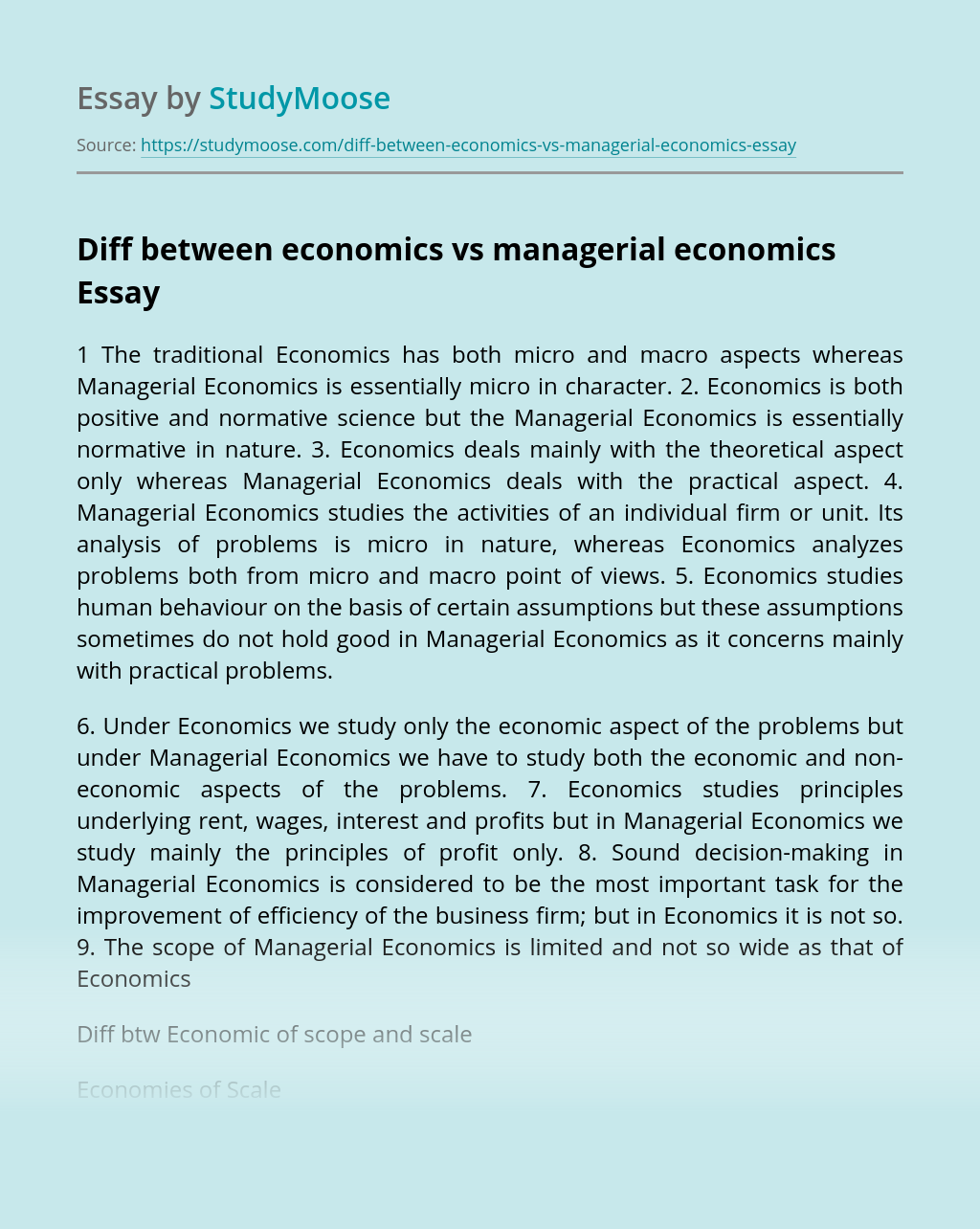