Dickinson’s Poetry Is Startling and Eccentric

Perhaps one of the aspects that draw us to the poetry of Dickinson is its eccentricity and startling nature. In her poetry, Emily Dickinson explores a number of different themes including death, hope, nature, pain and love. The trademark signs of a Dickinson poem are her hallmark dashes she uses. Her dashes suggest that there is more to the story than she is writing down. Another characteristic of Dickinson’s poetry is the capitalization of random words throughout her poems. This could suggest importance of the words that she is highlighting.

Turn in your highest-quality paper
Get a qualified writer to help you with
“ Dickinson’s Poetry Is Startling and Eccentric ”
Get high-quality paper
NEW! AI matching with writer

A large number of Dickinson’s poetry revolves around the theme of death; both psychological and physical. She makes the reader question what our place in the universe is. Her sharply contrasting moods and her laconic images make her poems appealing to scrutinize. Evidence of Dickinson’s unique and unusual style strikes us in ‘I Felt a Funeral in my Brain’. We’re given a comprehensive look at her delicate state of mind through her magnificent imagery.

Here, Dickinson compares her psychological deterioration to the rites of a funeral. The opening stanza of the poem divulges that she is in a coffin and ‘’mourners’’ are going ‘’to and fro’’.

The ‘’treading – treading’’ of the mourners as they move ‘’to and fro’’ combined with the ‘’beating – beating’’ of the ‘’Service like a drum’’ emphasizes her inner turmoil. The depth of her vulnerability astonishes us as she says her world is reduced to ‘’And Being but an ear,’’ She likens herself to a ‘’strange race’’.

We can clearly sense her isolation. I felt this was very abstract. It reminded me almost of a Picasso painting. We are left in no doubt of her deepening crisis with her startling image of the coffin crashing downwards as a ‘’plank in reason, broke.

And I dropped down and down—‘’. I heard a Fly buzz—when I died—… ” was equally eccentric and startling. Once again the imagery played a significant role in evoking this idea. The poem opens to a vibrant image of Dickinson lying in her bed surrounded by her nearest and dearest. ‘’The eyes had wrung them dry, / And breathes were gathering sure’’. I was struck by the startling contrast created here when she compares the stillness in the room to ‘’the air/ Between the Heaves of Storms’’ The poem strikingly describes the mental distraction posed by irrelevant details at even the most crucial moments—even at the moment of death.

The poem then becomes even more bizarre and more macabre by transforming the tiny, normally disregarded fly into the figure of death itself, as the fly’s wing cuts the speaker off from the light until she cannot “see to see. ” One of the most peculiar aspects of ‘‘I heard a Fly buzz—when I died—… ” is the odd introduction of the fly into this environment. Again, the imagery plays a significant role. Flies can often be associated with death and decay and I think that is the message Dickinson was trying to convey by using the image of the fly in this particular poem.

It is a poem that examines what is possible with hope and how far hope can carry a person. The poem uses a bird as a symbol to define the feeling that hope can give an individual. ‘’Hope is the thing with feathers That perches in the soul, ‘’ This proves that Dickinson is eccentric as most people would never compare hope to ‘the Thing with Feathers’. What is striking about the poem is its absolute simplicity, both in structure and in the words the poem presents. The idea of hope in the “chillest land/And on the strangest sea,” is a quite philosophical way of viewing the world.

There is a contrast within the poem between hope, represented with words like “warm,” “Soul” “sweetest” and the pain of life shown in words like “storm” “gale” “chillest”. There is a battle between hope and the pain of life; it is clear which one comes out on top as hope can still be found through gales and storms. I think the poem is trying to convey that even though things can seem bleak, hope can always pull you through it. Dickinson’s poem ‘I Could Bring You Jewels — had I a mind to –‘ is similar to ‘Hope is the Thing with Feathers’ in regards to the tone of the poem. It is a joyful, optimistic poem.

In ‘I Could Bring You Jewels’, Dickinson is corresponding with an unknown person in a coy, teasing tone. This poem is very different to most of Dickinson’s poetry because unlike many of her other poems she is not discussing death or loneliness and is instead, conversing with someone and seems to be enjoying herself. She is talking to this person about what gift she is going to buy him/her. ‘I could bring You Odors from St. Domingo – Colors — from Vera Cruz — Berries of the Bahamas –‘ Although I would not consider Emily Dickinson to be my favourite poet, I found her work intriguing and uniquely eccentric.

This could be because of the contrast between each of her poems and the different themes she uses in each poem. It may be as a result of its bleak, distressing nature. I personally felt that her fixation with physical and psychological death was quite shocking to be honest. The imagery Dickinson uses in her poetry could definitely be interpreted as very eccentric and startling. You would not expect all of the pain and hurt that is expressed in her poetry to be coming from a young woman from a well-to-do family who lived a very privileged existence.

Dickinson’s Poetry Is Startling and Eccentric. (2018, Sep 25). Retrieved from https://studymoose.com/dickinsons-poetry-is-startling-and-eccentric-essay 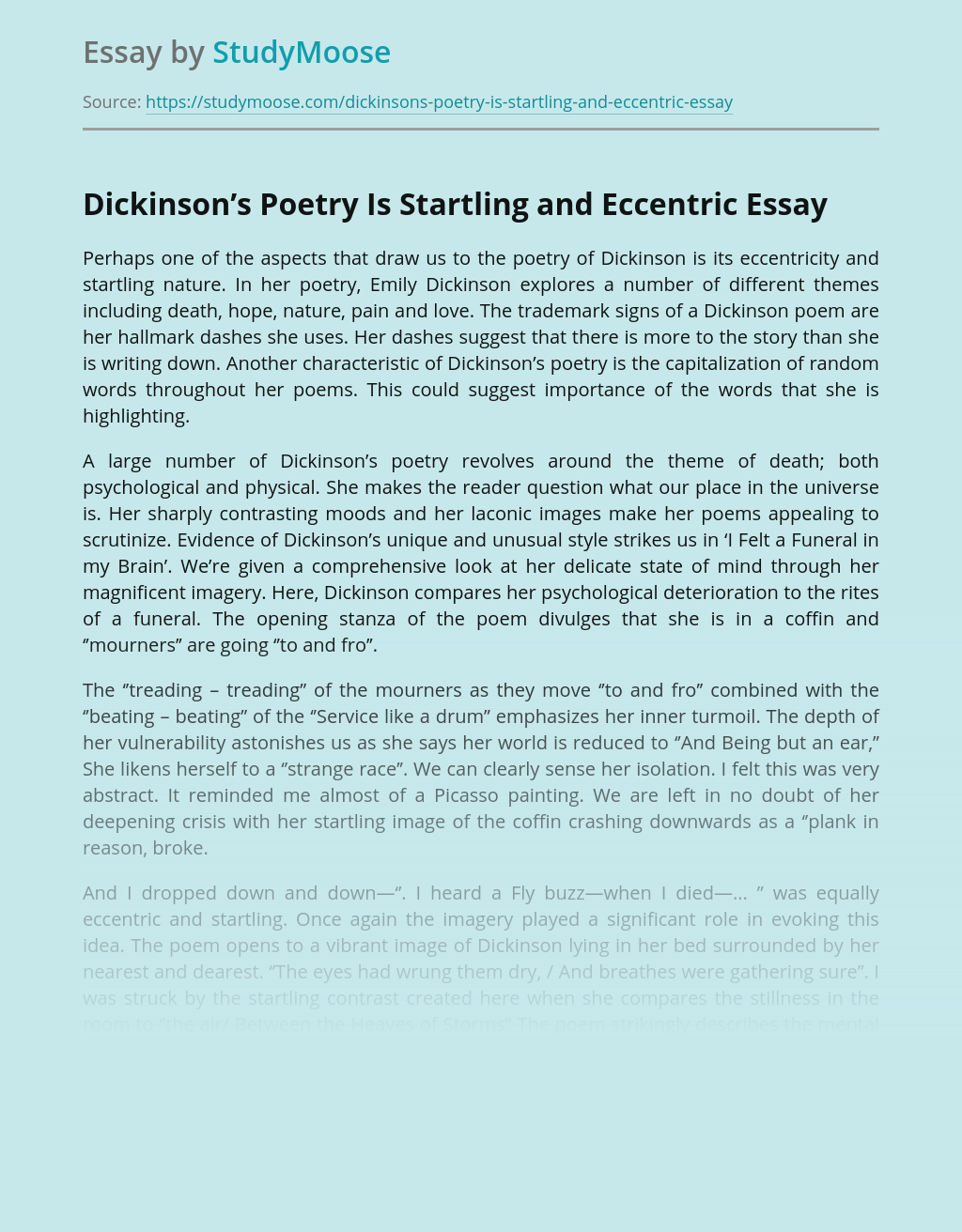 Turn in your highest-quality paper
Get a qualified writer to help you with
“ Dickinson’s Poetry Is Startling and Eccentric ”
Get high-quality paper
Helping students since 2015
Stay Safe, Stay Original