Charles Dickens’ Great Expectations was first serialised in 1861 in the journal ‘All Around the World’ during the Victorian period. During this time women were almost regarded as second class, even though the reigning queen had been on the throne for fourteen years. On the contrary, the Queen herself was quite masculine thinking it quite ‘improper’ that women should have the same rights as men. No women could vote, all major decisions were made by men and there were no important female political figures except for the queen herself, who was opposed to ‘votes for women’.

Don't use plagiarized sources. Get your custom essay on
“ Dickens Presentation of Female Characters in Great Expectations ”
Get custom paper
NEW! smart matching with writer

Women were beginning to show signs of demand equality. Dickens created a lot of public awareness in his writings about the condition England was in. He liked to give the message ‘If men would behave decently the world would be decent’. He became very interested in socialist ideas from a young age and wrote novels for several years, including a novel based on his own life and the troubles he had.

Throughout the novel he encounters an escaped convict only then to be summoned by the wicked and cold Miss Havisham and her beautiful niece Estella. On top of this he is suddenly endowed with the generosity of a mysterious benefactor. Dickens uses physical appearance to convey his female characteristics. It was traditionally thought at the time, if a woman and ’round and curvy’ then she was a very warm person but if she was bony and skinny she would be an unpleasant and not very nice woman.

There are several examples of this throughout the novel. He wanted to show what a horrible woman Mrs Joe Gargery was. So he described her as being: “not a good looking woman” and “tall and bony”. Both of these don’t make her sound particularly attractive and she is a very cruel person to Pip and Joe Gargery. Miss Havisham is shown in the same light, “Miss Havisham’s grey hair was all adrift upon the ground, among the other bridal wrecks, and was a miserable sight to see”. She is always dressed in her old wedding dress and her skin is very pale.

Therefore almost giving us the impression, she is a ghost and she died years ago, making her seem like a very peculiar woman. There are many gothic images of Miss Havisham throughout the novel, because Gothic imagery was very popular at the time. She is twisted and evil and this is reflected in her attire and in her home, Satis house. The Clocks in Satis house reflect Miss Havsiham because just like clocks, she has stopped moving on with her life, she is also decaying, physically and mentally, just as the house is. She is only wearing one shoe and hasn’t changed her clothes in years.

A Victorian reader would think upon first seeing a woman like her, that was crazy or evil and in this case, she is both. We see everything through Pip therefore we relate to him and feel what he does. So, even if Estella is horrible to Pip we can still forgive her because Pip does. Estella, in contrast “seemed more beautiful than she had ever seemed yet”, therefore in the eyes of a Victorian reader making her a warm and caring woman. This is ironic because she is the complete opposite. She can not express her emotions and has been brought up not to express love.

But because the book is in a first person perspective the reader can relate to her beauty and because Pip still likes her, inevitably so does the reader. We see everything through Pip therefore we relate to him and feel what he does. So, even if Estella is horrible to Pip we can still forgive her because Pip does. Mrs Joe Gargery is very cruel to Pip until she is attacked. “It’s hard enough to be a blacksmith’s wife without being a mother”- she is resentful of having spent her life looking after Pip and being married to Joe.

Mrs Joe Gargery is a very cruel and horrible old woman and the reader’s feelings towards her are only strengthened by the fact that she is not very attractive. Estella can be just as cruel to Pip as Mrs Joe Gargery is at times. When she says “you wait here boy” and “you ridiculous boy, will you never take warning? ” it tells the reader she thinks a lot of herself and she is very proud. Again because she is pretty and the fact that, it is not her fault that she is this way, she is forgiven by the reader and Pip, because he is in love with her.

In Mrs Joe Gargery’s opinion she has spent too many years raising Pip. She spends all her time being spiteful to Pip and will not be kinder, whatever the scenario. Pip would often recall scenes such as this one, ‘My sister made at dive at me and fished me up by the hair’. She strongly resented him and would take every opportunity possible to show it. She treats her husband Joe in the same way, although at heart Joe is an honest man and good man, he isn’t very bright and Pip always thinks of him as a ‘larger species of child’.

Mrs Joe Gargery will, on the other hand, treat him like one Dickens makes the reader like Joe because Pip is very fond of him. This only increases the reader’s dislike for Mrs Joe Gargery. It is only until her encounter with Orlick that she becomes a completely different person, becoming much more patient. It is only because of an event such as this, she is like this, not because of her own will. It’s the male character Orlick who changed Mrs Joe Gargery into some more acceptable to the reader. Dickens created this event to show the reader that men still have authority over women.

Miss Havisham died a very twisted, old and bitter woman. She was malicious and she poured all her dark, evil emotions into Estella. She once loved her husband-to-be very much. She had a lot of passion in her heart but that was destroyed when he left her standing at the altar. ‘I’ll tell you what real love is….. giving up your whole heart and soul to the smiter’. Once again it has been a man that has changed one of the female leads into a person of hatred. She had an accident many years later and was left in such a state of shock she never fully recovered. 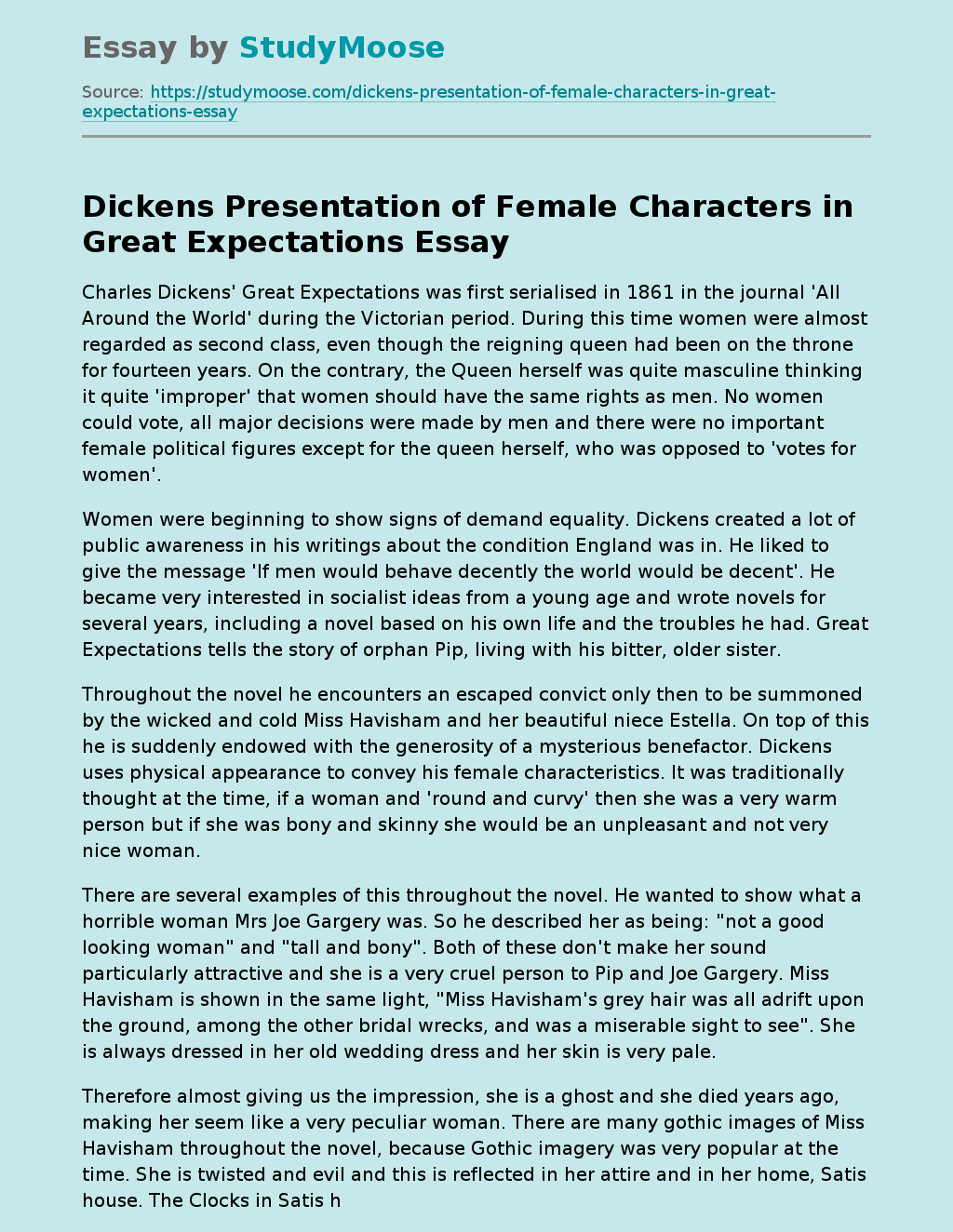