The circus in Dickens' "Hard Time"

The people in the circus

I think the circus are included in the play just to account for the small number of people who are like them and who haven’t had their imagination and life taken over by facts. They are colourful and lively, they are described by Dickens as religious as he seems to think they’re special, they are also seemed eccentrics and quite weird. They are proved that they aren’t normal and have a dysfunctional side as Sissy’s father just left to find something else to do.

Don't use plagiarized sources. Get your custom essay on
“ The circus in Dickens’ “Hard Time” ”
Get custom paper
NEW! smart matching with writer

As the circus are colourful, weird, imaginative, religious and many other words which are used to describe them, imagery plays a key role in the play. “A stout modern statue with a money box at its elbow, in an ecclesiastical niche of early Gothic architecture” is a quite weird quote used to describe the circus from the outside.

Sissy is quite unlucky as before she lived a fun life with the colourful people at the circus and enjoyed herself probably.

But then her father unexpectedly ran away and she was left on her own, it may have been harder for her as other circus people said it could have been because his act was slipping and could have been embarrassing for her. She should probably be grateful for Gradgrind taking care of her, but anyone can see she has unfortunately been roped into his world of facts.

But whilst still at Gradgrind’s she has a strong enough character to defeat Gradgrind and bring in the circus’ colour and imagination.

Sissy is under control from Gradgrind

Although Sissy is under control from went under control from Gradgrind, before in her earlier years she was brought up with love and had a good education. This gave her an advantage going into the care of Gradgrind’s “no fun” factual philosophy. Sissy has a strong character as she brings warmth and imagination to the Gradgrind House and eventually changes Gradgrind for better, she spreads love and imagination, I believe she is realistic.

Gradgrind changes for the better after he had eventually seen what he was doing was wrong, he changed by relaxing after Sissy came face to face with him and revealed the flaws of his system and how he mechanically teaches them like a factory. As well as relaxing more he turns to a more scintillating, sensitive man and caring more about his children, “that if you had by any chance undeceived me some time ago it would have been better for both of us”.

The circus people are the victims of stereotyping

I believe the circus people represent the victims of stereotyping and Dickens is using them as an example to show them how they can be so warm, colourful and all the qualities the circus folk have. Then Gradgrind and Bounderby represent people who have taken a liking to the sudden infiltration of facts and promoted it, but in Gradgrind’s case to extent, this is Dickens using him to show how bad it was. With Gradgrind changing at the end due to Sissy’s exposure to him it showed a chance that someday life would not be taken over by facts and Utilitarianism may calm down. I think that good triumphs at the end and is responsible for the change. But I think as everyone else is obsessed with facts the circus is just one of few people eligible in contention to be able to do what they do. 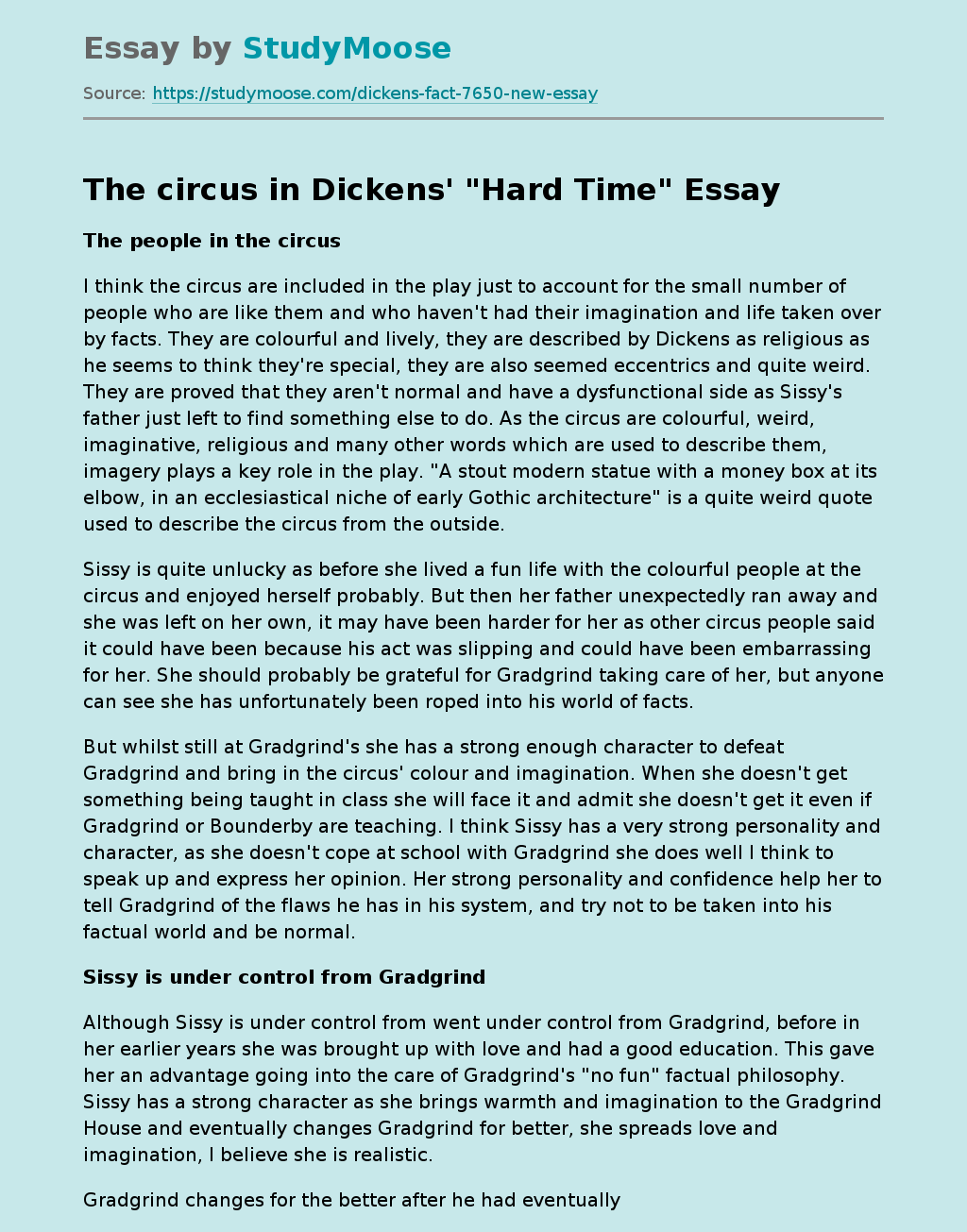