Luis is a 32-year-old male who immigrated to the U.S. when he was 14. He later became a US citizen. Although, Spanish is his native language, he speaks English extremely well. He recently returned to living with his parents after being laid off from being a semi-skilled auto worker 6 months ago. Luis is the middle of three children. He has a younger sister and older brother, his brother is away at college. Just prior to being laid off, he became involved with a young woman he claims is “the woman I’m going to marry.

Don't use plagiarized sources. Get your custom essay on
“ Diagnostic Assessment ”
Get custom paper
NEW! smart matching with writer

He lives with his parents after being laid-off 6 months ago when he was living with friends. He was able to find a job where he works as a pizza delivery person. His mother was diagnosed with depression following the family’s move from Puerto Rico. Luis completed high school and one year of vocational training.

Luis is self-referral and has concerns about his anger and impulsivity.

These issues have surfaced since his returning home. Luis also wanted to know why he isn’t himself anymore. Luis stated that, “I just don’t feel like I am doing well but I don’t know why”. He reported feeling that there is really nothing bad going on in his life, yet he just feels like everything is bad. He reports that his parents are on his case because he don’t do anything other than sit around the house. His parents tell him that he needs to get himself under control.

He feels like he really is not motivated to do things anymore.

Luis reports that his home life finds him being harsh to his parents, especially when they make a request of him and he becomes angry over little issues. This is the same pattern he had growing up with them. He left home when he was 22-year-old to live with buddies. He frequently argues with his girlfriend. His parents attend Christian church weekly; yet, Luis only goes on some of the major holidays like Christmas and Easter.

Luis reported that he has many friends, yet he has not been hanging out with them as much as he was before, and he don’t feel like being with his girlfriend, because he get too angry with her. He reported that he likes to watch sports on television. Luis describes himself as a good person, but don’t think he was when he was younger.

Met all milestones; at time of assessment he reported his health to be within normal limits. Luis stated that he is not on any medication. His mother was diagnosed with depression following the family’s move from Puerto Rico. No history of psychiatric admissions or behavioral disorders.

Luis is neatly dressed; wearing jeans and a t-shirt; he is of average height and weight. He was alert and oriented to person, place, and time. He was soft-spoken and his speech was at normal rate. Luis was very cooperative and rapport was easily established. He came to the testing session willingly to participate but reported he had one of those nights where he had trouble getting and staying asleep. On several occasions, he slumped back in his chair. He followed directions and were observed to have times of being somewhat sluggish in his responses. 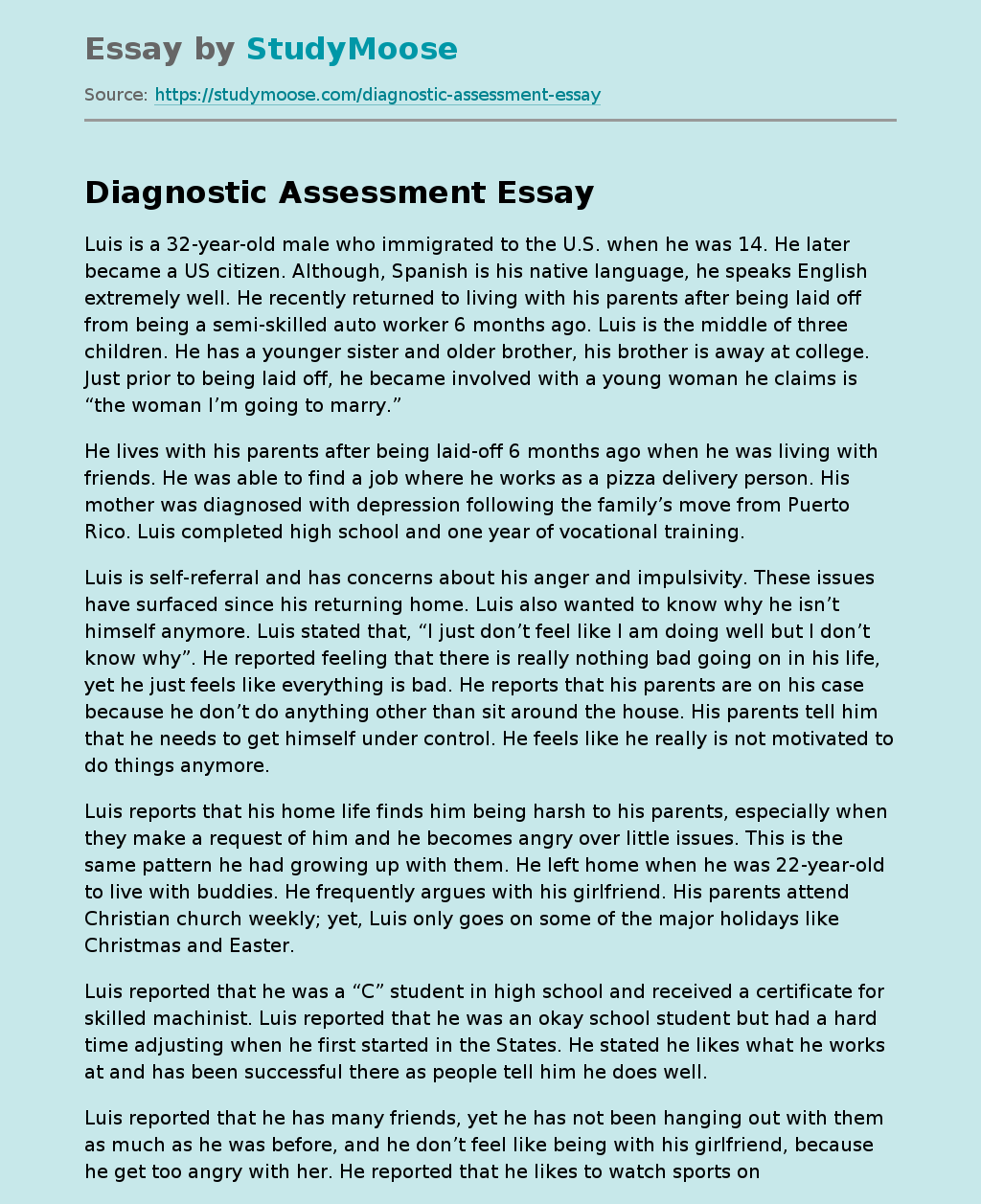