-Dhumaketu (Gaurishankar Goverdhanram Joshi) (SUMMARY) Dhumaketu can be glorified as a prolific writer who has given a very vivid and wonderful description of the village and its people, along with the nature and loneliness of human beings. The story talks about coachman Ali who could not bear the pain of separation when his daughter left after her marriage. His loneliness gained momentum with passage of time in which he desperately waited for a letter from his daughter Miriam. The story begins with a very vivid description of how silent the village was “wrapped in deathly silence.

Don't use plagiarized sources.
Get Your Custom Essay on Dhumketu (Gaurishankar Govardhanram Joshi). The Letter-Summary Just from $13,9/Page

” The description of it being early dawn and people fast asleep in a winter morning is very well portrayed through various phrases such as “early dawn stars”, “distant steps”, “occasional bark of dogs”, etc. The old man goes to the post-office everyday occupying a particular seat with a fixed purpose – awaiting a letter from his daughter. People found him to be a lunatic and laughed at him.

In the following lines of the story we find Ali missing from the post-office for several days as he falls sick terribly. At last, he reaches the place one day and asks for the much awaited letter. The postmaster gets infuriated and chases him away. Although this angers Ali, he doesn’t lose his temper. He gives five golden guineas to the postmaster to forward his letter to his grave as he considers that very day to be his last day of survival. He was never seen again.

The turning point in the story comes when trouble knocks on the postmaster’s door in the form of news about his own daughter who lay sick in another town. He was anxious about receiving a letter from her, discussing her health. He searched in the pile of letters and to his shock, found Ali’s much awaited letter from his daughter. His anger disappeared in a whiff and he sent for the postman to send it to Ali right away. The story here turns quite heart-rendering when the postmaster feels empathy towards Ali. He is grieved because of his condition and is filled with sympathy for the old man. He then personally went to the post office to give Ali the letter. To his amazement, Ali received the letter with gratefulness and tears in his eyes. The postmaster shrunk back when he noticed a light of kindness when Ali received the letter. The postmaster narrated this entire story to the postman.

When asked on whom he saw the postmaster said he saw Ali. This is when he came to know that Ali had died three months before. Here, the bewildered postmaster found at the doorway that Ali had disappeared. Imagination had deceived him. That evening he went to Ali ‘s grave and laid the letter there. Empathy makes us understand each other and build strong relationships. One can feel the anxiety of other when one finds himself in that particular situation. In the end of the story, tortured with remorse and grief, the postmaster waits for news from her ill daughter, passing a restless night beside the charcoal sigri. 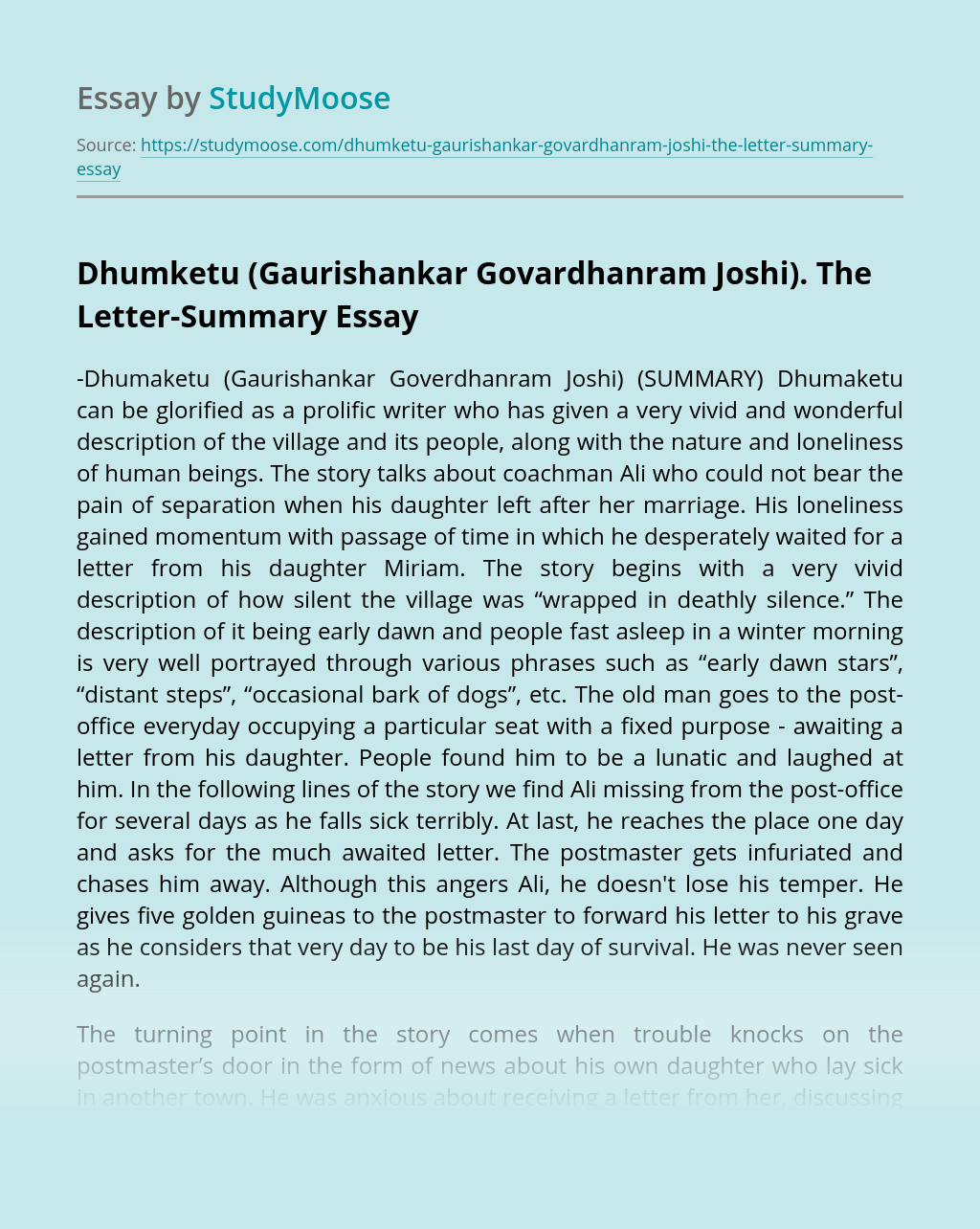 "Wag the Dog" The Movie

Wag the Dog is a movie that demonstrates the power that media has in our society and the ways it affects it. Through the movie we see how media manipulates people’s thoughts, believes and the ways they interact. Barry Levinson, the director of the movie, emphasizes the importance of active media consumption as he shows...

The Cove is an Academy Award-winning documentary about the horrifying and merciless slaughter of dolphins in Japan. I watched the film in absolute horror… Sometimes with my hand covering my eyes, and saw something horrible, something bloodier and more brutal than any fictional horror movie could ever do to my mind. I’d seen the previews...

View sample
Get Essay
Pirates of the Caribbean: The Curse of the Black Pearl

The book Pirates of the Caribbean, written by Irene Trimble is about the legend of a pirate ship called the Black Pearl its curse and the crews that fight for it. Jack Sparrow was once captain of the Black Pearl but now Barbossa is the captain. Jack and Will Turner are on a mission to...

Yi-Mou Zhang’s Raise the Red Lantern, is a beautiful and brilliantly made film in its own right. If, however, the team of Orson Welles and Greg Toland had produced the same film it would take on an entirely different look and feel. The film would reflect Wells love for creating physical representations of thematic metaphors...

View sample
Cause and Effect of Movie Crash

Crash, a film directed by Paul Haggis in 2005, is a film that follows characters whose lives intertwine over the course of just a few hours. These characters all have different cultures, ethnicities and backgrounds, but are each in front of the identical issues of racial discrimination and stereotyping because of their differences. Making the...