To those who disagree with the stance of fictional vigilantly heroes such as Dexter Morgan, in effort to convince them that the vigilante’s actions have earned society’s full support, the offenses commonly lain against them will be disproved and a new perspective will be given to support them. Dexter is a serial killer in Miami, FL from Dexter, a series on Showtime; however Dexter only kills murderers. Dexter is considered a felon and his actions are a capitol offense.

Many would consider that grounds for Dexter to be thrown into jail, or even face death-row. But look at all the murder we allow and encourage today. Our military is trained to kill America’s enemies. While not everyone approves of war and while no one enjoys it, war is a part of our past and will be a part of our future. If nothing else, war must be accepted. Killing has gone on since the beginning of human history- whether that is Cain and Able, or the war between Sumer and Elam.

September 11, 2001 a terrorist organization known as Al-Qaeda attacked America by sending planes through the World Trade Centers in New York and the Pentagon in Virginia. Al-Qaeda unjustly killed 3,000 Americans and American’s justly kill people like this every day.

If killing and war are accepted responses to threats posed against the way we live, then who makes the distinction between what killing is just and when killing is necessary. The answer is simple- the law. This topic no longer becomes a moral issue but an issue of law. If Dexter, like our troops over seas, is killing murders then morally Dexter has support. But not full support- not support from the law. There is no arguing murder is against the law, but there are no doubt exceptions. The military is a great example of citizens who, by our laws, can kill. These men are legally allowed to, or licensed, to kill. These are the citizens who kill murders that have or will murder Americans if given the chance. These murderers exist not only over seas, but also in America- killing 16,000 Americans annually. The court system will do the best they to capture them, but what happens when they fail? When citizens stand up against a crook, murderer, or rapist, the punishment lies with the man who rid the world of the injustice; the man that can not let injustice stand is the man that the law says is out of hand.

Why should the good be punished? Murder is usually considered an act of passion. It’s usually a one time thing which is why most murderers don’t get the death penalty. However, certain acts of passion fit the bill on who should get killed in the electric chair. A man who rapes and murderers victims deserves a much more severe punishment than the man who shot that felon. Most wouldn’t mind that the rapist was killed and most would believe that the man who shot the rapist had a good mind to do it. If these actions were perfectly legal, it would spark a movement. A movement that would result in the death or thousand of people who believe they are capable of killing felons too. A movement begun with the good intention of cleaning up our streets that will end with them covered in blood. Civilians should not be encouraged to fight crime.

But just like policemen and detectives, with training they can. A license to kill these murderers is the best weapon against them. A process should be set in place to allow for this. When the system fails, these licensed killers can put to rest those who murder. Dexter must find proof of the murderers guilt. It is part of his “code.” A set of rules made for what person he can kill. Dexter can only kill someone who is a murder, for no condonable reason. If Dexter finds this proof, he is free to kill. Why not make the code the description for who a licensed killer can kill?

This will lower the rates of overall death tolls and will stop other murderers who kill for a morally wrong reason or for none at all. If Dexter can kill legally, he has then earned all the support he needs. Dexter doesn’t need to be famous, he doesn’t need to have to world accept him, he just needs understanding. He has urges to kill, so why not use them for good? Dexter’s dark side could be used to created a brighter world, because there can be no light without the dark. If Dexter could be given a license to kill, we all would be in a safer place. 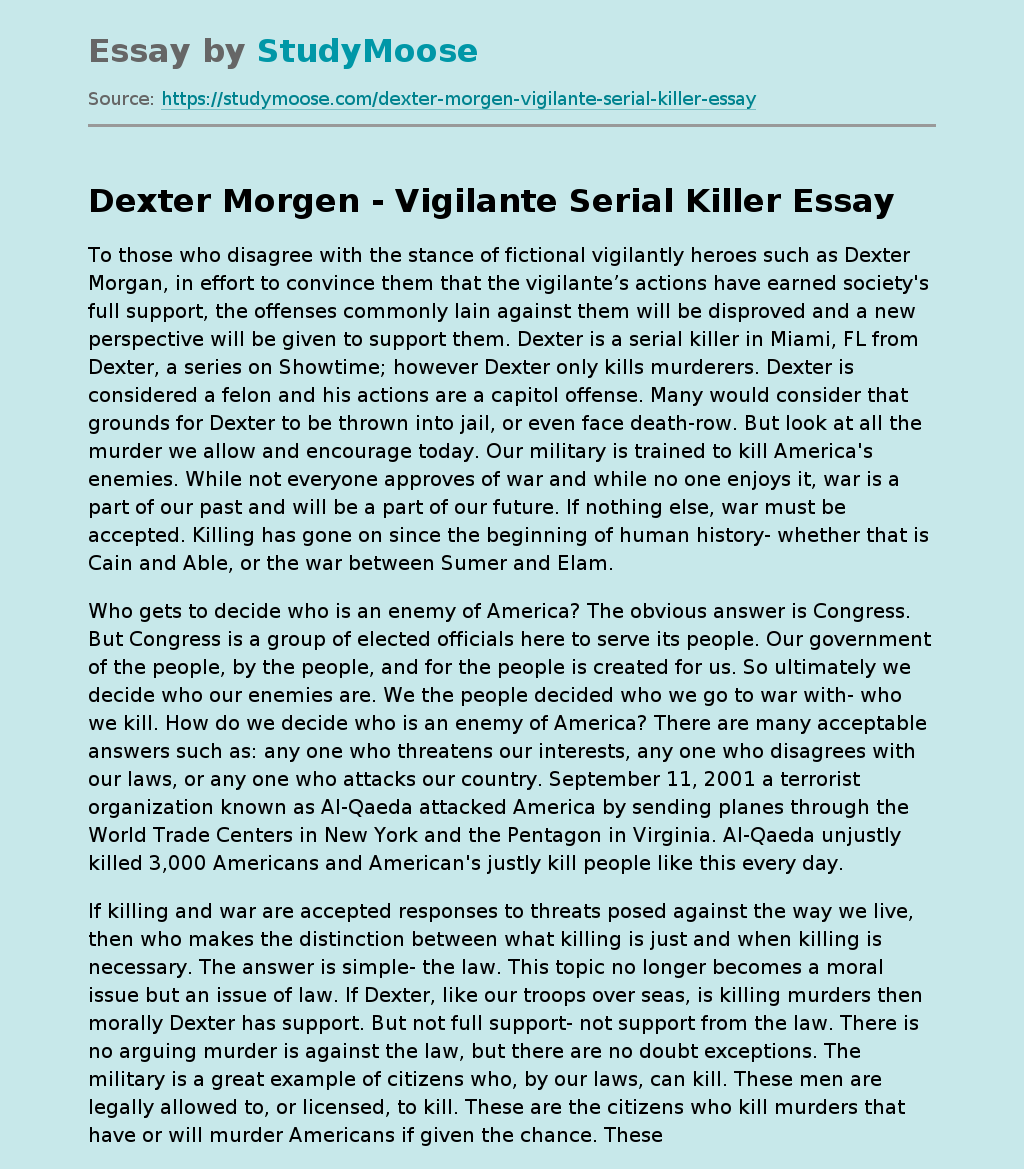