Piaget, Erikson, and Kohlberg. I decided to conduct personal interviews and relate my findings to these three theories. Piaget’s theory explained the four stages of cognitive development. Erikson divided psychosocial development into eight stages, describing how the people and the environment affects how we gain our personality. Kohlberg’s theory of moral development was to understand the reasoning to why we make the decisions we do. Below are how my finding relate to these various developmental psychological theories.

Don't use plagiarized sources.
Get Your Custom Essay on Developmental Psychology Paper Just from $13,9/Page

Piaget’s four stages of cognitive development start with the sensorimotor stage. This stage is from birth to around two years of age when the infant creates their first understanding of the world around them by taste and touch. At two years of age to six or seven years, the child transitions into the pre-operational stage.

In this stage the child’s thinking is still egocentric. Even though this age group has stable concepts and mental reasoning, they lack the logic for mental operations and can only think in their point-of-view.

Then the concrete operational stage begins at about seven years old and lasts until the child is, approximate, eleven years old. During this stage, the child can understand and form simple mathematical operations. Egocentrism will be eliminated and they will no longer be able to see life from one perspective (their own point of view). Not only in mathematical operations, the child can perceive multiple aspects when solving a problem. At this stage, they begin to form a sense of responsibility for their pets and/or personal belongings. Formal operational, Piaget’s final stage, begins around age twelve and continues through adulthood.

Formal operational phase is when the chid develops into an adult and is capable of abstract thought and moral reasoning influences decision making. The trial-and-error method begins here, along with the start of considering future outcomes and consequences from decisions. Erikson’s eight stages of psychosocial development begin with birth to the first year of life. During this time an infant is completely helpless and relies off their caretaker for everything. For this first year it is crucial for the caretaker of the infant to form a relationship for socialization development. The second stage extends from the first year of the child to age three, when there is a conflict between doubt or shame and autonomy. The genital, or third stage lasts from age four to age five. The conflict here is between imitative and a feeling of guilt. The fourth stage, the latency stage, lasts from six to eleven years old. This is when a child learns to reason, create, and earn. The conflict is between industry and inferiority.

These first four stages are more dependent on others and the individual is easily influenced by their environment. The last four stages of Erikson’s developmental theory occurs when the individual begins to search for their mature self and a sense of direction. The fifth stage begins with adolescence, that lasts from age twelve to age eighteen. Here, the conflict is between identity and role confusion. The adolescent transitions into the young adulthood stage, lasting from age eighteen to twenty-five. This is a time when developing a sense of identity and career success. This is when the individual is on the path to maturity and independence. Adulthood lasts approximately from thirty-five, to fifty five years old. During this phase the adult starts to pass on their knowledge to another. The conflict is between generality or self absorption. The final stage of development is maturity. This stage lasts until death, when the individual struggles to look back on life with a sense of satisfaction and evaluate our life. Kohlberg’s theory of moral development provides us with a clearer understanding of why we make choices.

This theory was divided into three stages of moral reasoning. The most basic stage, is pre-convention. During this stage the idea that we make our decisions due to fear of punishment or desire for reward occurs. A child is most likely to made decisions with this stage, due to a fear or obedience to authority. Next, conventional morality is less of a fear to an authority figure, more the individual wanting to do the right thing. This is society conforming us to play nice to maintain social order. Post-conventional may be the opposite of conventional. Post-conventional does not mean we do something wrong to beat conformity, but an individual will follow what they believe to be good even if it conflicts with the laws or mores of society. According to Piaget’s second stage, the pre-operational stage, the child’s thoughts and actions are egocentric and lack logic for mental operations. The child I interviewed had a self-centered outlook on life, lacking realistic goals and achievements.

At this time in the child’s life, they are also at Erikson’s latency stage, when they learn to reason, create, and earn, thus explaining why one of this child’s biggest accomplishments was mixing two sodas to create one. In conclusion, Piaget’s and Erikson’s theories can accurately predict a child’s thoughts and behaviors. Teenagers are more complicated, for they have moved past the latency stage into the adolescence stage. Identity development and role confusion are the larger conflicts. Also at this point, they transition into the formal operational stage, when they can think abstractly and make their own decisions. When asked if she had gained or lost self-confidence over the years, the girl I interviewed, Ashley, responded: “So I lost it throughout middle school, but gradually started gaining it through high school.”

This is due to Ashley struggling and beginning to find her identity. She had already goals that she wanted to achieve and was able to predict what she wanted to do in five years. As a teenager, Ashley can make decisions for other reasons than fear of punishment or desire. A step away from adulthood, at adolescence Ashely is almost able to act and think like an adult. Adulthood is similar to adolescence in a way. Due to the fact that both adolescences and adults are able to make decisions using any of the previously mentioned moral reasoning strategies and both are in the formal operational stage. Whereas, adulthood continues to branch away from adolescence is only evident using Erikson’s developmental stages. The young adult I interviewed, Dustin, is on the fence of two stages: young adulthood and adulthood.

By now, Dustin should have a sense of self and independence. “Back then I had no ambition, I just wanted to lay video games. I mean I still want to play video games, but I also want money and to be successful,” said Dustin when I asked him how different he was from when he started high school. Over the years his desires and goals changed as he matured with his career. Yet, at forty-seven with four kids and a career, the woman I interviewed had no problems understanding her identity ulike a teenager or young adult might have. Her conflicts are generality, feeling worthless or without purpose in life. According to Erikson, at this stage middle-aged adults have the desire to pass on their knowledge and skills to the next generation. When asked what she wanted to achieve in the next five years, she responded: “I want to get all four my kids financially independent and start saving money for retirement.”

She also shared her hopes about her children getting married and having kids: “I’ll be able to play with them but not have to worry about all the responsibilities.” Towards the end of our lives when we reach elderly adulthood, various experiences can be fulfilling or disappointing. The final stage of Erikson’s theory, maturation, when the individual struggles to look back on what they have done with a sense of satisfaction. When I asked my grandma what she wanted to achieve in the next five years, there was a pause in her voice and I could tell the answer she blurted out was not genuine. Perhaps my grandma had been through so much, she no longer wanted to challenger herself with more life hurdles.

“I think kids had more fun and didn’t worry about material things,” she said after I asked how things were different now compared to when she was a teenager. My grandma looked back on her past fondly, and offered me advice how I should act in the future. She had more advice and knowledge to pass on than plans ahead of her. Over the course of the implementing these theories into my personal interviews, I have learned that the development of the brain works in stages, and the three scientific studies could accurately predict the behaviors of the various age groups I questioned. In conclusion, the studies were very effective in explaining how our behaviors and development increase over time, and in which order they do. 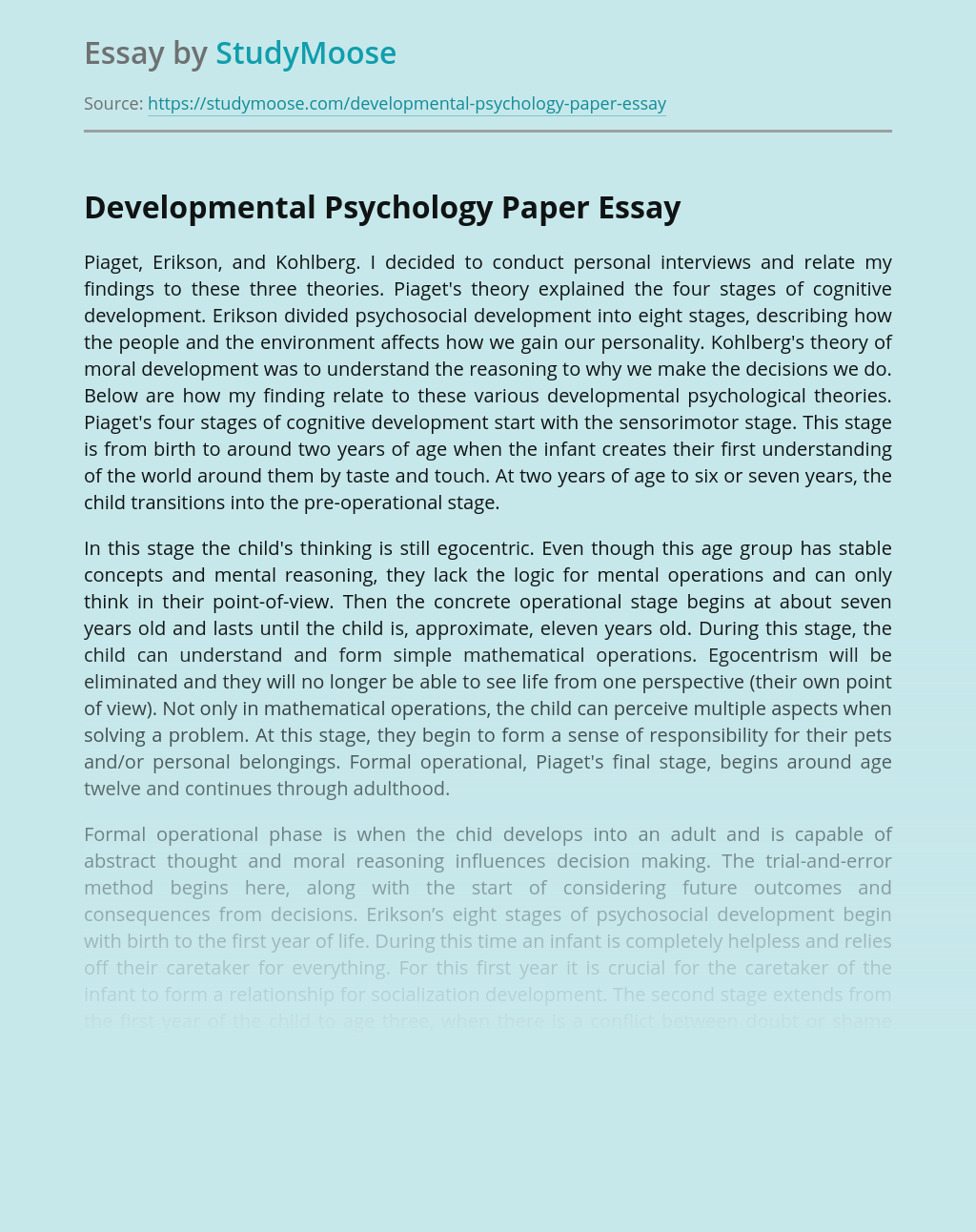 Rate this post In every profession it is vital for a private to develop and grow professionally. Leaning is a routine aspect in professional advancement. Every day provides brand-new needs that require defined methods in resolving them. This paper research studies profession development for signed up nurses working in the ICU. The primary step an...

Rate this post Nowadays, most people tend to search or find things that are easy to work on. We tend to be clingy, trendy, and work things automatically. So, we design you these “Laboratory Equipment Borrowing System”. It is an automated borrowing system. This offers equipment which you can be borrow or use temporarily ranging...

Get Essay
Areas of learning and development

Rate this post Every year millions of college students’ worldwide graduate from college in hopes of obtaining a position in their career field of choice; however a lot of these students do not have a plan of action to actually help them find their career and achieve their goals. So much emphasis is put on...