Development of Young Hamlet in "Hamlet" by William Shakespeare

William Shakespeare in his play, Hamlet, makes use of a soliloquy in order to help the reader better understand the development of young Hamlet in his quest for revenge. Before being exiled for the murder of Polonius, Hamlet was unable to get himself to kill Claudius, who was responsible for the death of his father. After stumbling upon a grand army led by the young Prince Fortinbras, Hamlet discovers that he must avenge his father. Now set on carrying out his revenge, Hamlet delivers a soliloquy which allows us to see how he develops as a character.

Don't use plagiarized sources. Get your custom essay on
“ Development of Young Hamlet in “Hamlet” by William Shakespeare ”
Get custom paper
NEW! smart matching with writer

Hamlet’s soliloquy begins with him questioning the value of life. More specifically he questions the value of a life whose, ‘Chief good and market of his time Be but to sleep and feed.’ As seen in this line, Hamlet clearly believes that you need to accomplish something with your life. He thinks that merely living without any purpose is a waste of your life.

This idea is reinforced when he says, ‘He that made us with such large discourse, Looking before and after, gave us not That capability and god-like reason To fust in us unused.’ This excerpt once again shows Hamlet’s desire to do something meaningful with his life. He thinks that with all the capabilities we were given, it would be a great shame for them to go unused. Shakespeare wrote this because it is essential to understanding Hamlet as a character. Knowing that living a meaningful life is central to Hamlet’s character, you are able to better understand why he does certain things.

This soliloquy also develops Hamlet’s inner frustrations. Upon seeing the army led by Fortinbras, Hamlet says, ‘Witness this army of such charge and mass ¦ Exposing what is mortal and unsure To all that fortune, death and danger dare, Even for an egg-shell.’ Hamlet witnesses this army marching on to fight over what is an undesirable and unworkable piece of land. Nevertheless, these men are willing to fight for honor, even if the cause is questionable at best.

This leads Hamlet to question his inaction when he says, ‘How stand I then, That have a father kill’d, a mother stain’d, Excitements of my reason and blood, and let it all sleep?’. It is clear that Hamlet questions his self worth, as an army was willing to fight over practically nothing, but he can’t kill his uncle even though he has the desire as well as the justification to. This frustration with himself drives him to action. By seeing this, the audience understand why Hamlet finally commits to his revenge. Understanding this allows the reader not only to relate to Hamlet as a character, but more importantly as a person. Seeing that Hamlet has the same struggles of some real people, allows the audience to better relate to and enjoy the story. This soliloquy is essential to understanding the story.

Development of Young Hamlet in "Hamlet" by William Shakespeare. (2016, Oct 14). Retrieved from https://studymoose.com/development-of-young-hamlet-in-hamlet-by-william-shakespeare-essay 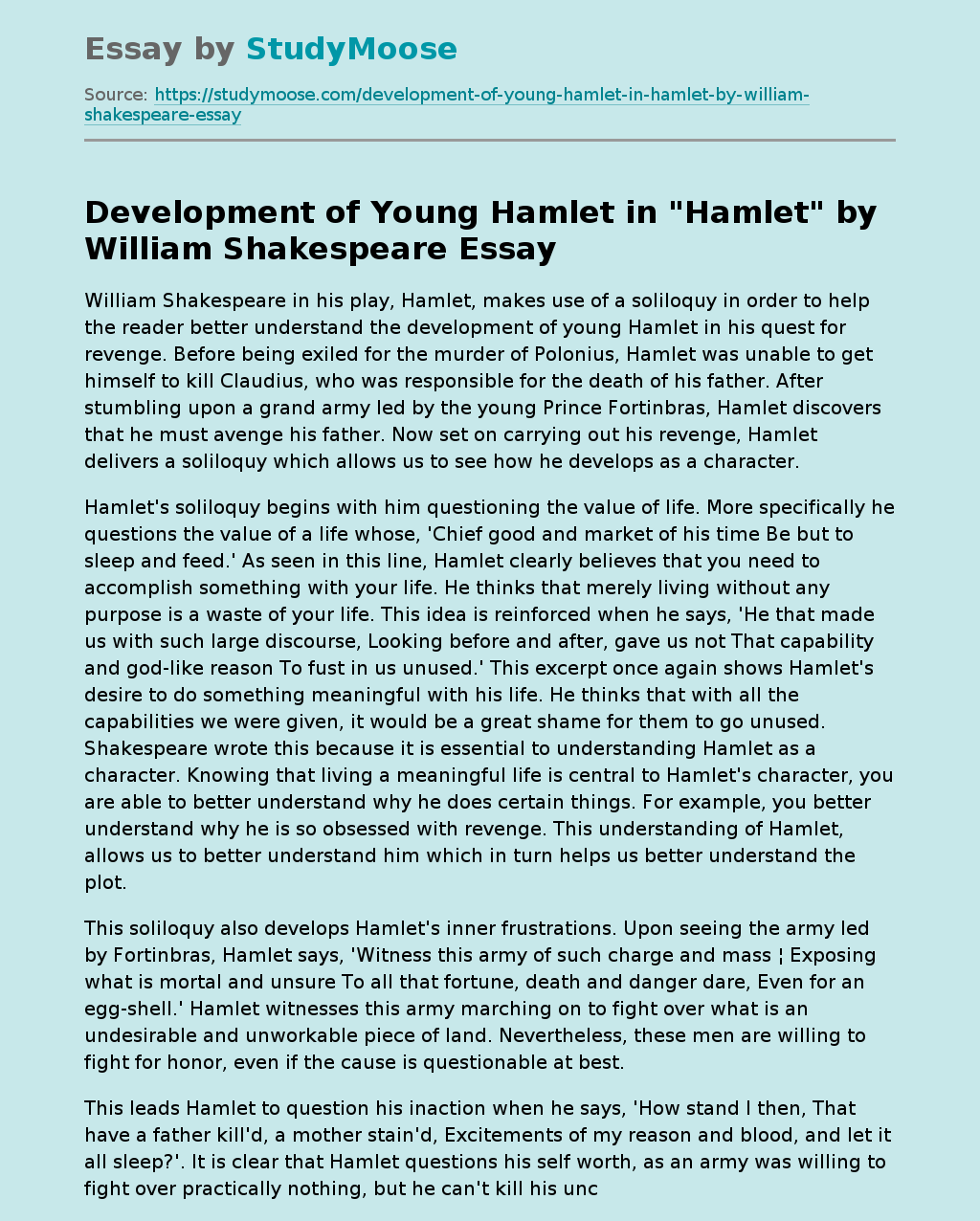