Development of Axum and Meroe in Northeastern Africa

In both the development of Axum and Meroë in northeastern Africa possessed the ores and fuels needed to produce iron on a large scale. They traded along the Nile River to Egypt, and their goods such as gold and ivory reached ports all along the Mediterranean Sea, Red Sea, Southern Africa, and quite possibly as far as India and China.

Don't use plagiarized sources.
Get Your Custom Essay on Development of Axum and Meroe in Northeastern Africa Just from $13,9/Page

Axum was a very powerful state. It controlled a huge number of ports, such as Adulis along the Red Sea coast, and it participated in the commerce of the Indian Ocean, where its export goods included ivory, slaves, and crystal. They also traded with Alexandrian Egypt, and eventually with Rome, Byzantium, and India. Teotihuacan was a powerful political, military, economic and cultural center that influenced the whole of Mesoamerica. Teotihuacan is one of the world’s oldest and most impressive archaeological sites.

The wealth of Teotihuacan was based largely on the amount they had on the trade of obsidian, a coarse green glass occurring in volcanic rock. In common with the other Mesoamerican civilizations, the Maya had measured the length of the solar year to a high degree of accuracy. They produced extremely accurate astronomical observations; their charts of the movements of the moon and planets were used to predict eclipses and other celestial events such the time between conjunctions of Venus. The ancient Maya had diverse and sophisticated methods of food production. It was formerly believed that shifting cultivation agriculture provided most of their food but it is now thought that permanent raised fields, terracing, forest gardens, managed fallows, and wild harvesting were also crucial to supporting the large populations of the Classic period in some areas.

67. Historical Analysis: “While long-distance trade across Afro-Eurasia predates 500 C.E., it grew in importance between 500 and 1500 C.E.” What key developments make this statement true?

In between 500 and 1500 C.E Afro-Eurasia’s trade increased and altered consumption patterns and encouraged peoples across the zone to specialize in producing particular goods for market rather than being self-sufficient. They followed religions such as Buddhism and Islam and it spread along the trade routes. During this period, there were a lot of epidemic diseases, and they spread along the trade routes. Some regions developed stronger states in part because of increased commerce along the trade networks. These regions were East Africa, West Africa, and Southeast Asia. There were also a lot of technological advances during this time. This included the development of larger ships and the magnetic compass in China. This also helped increase trade.

Development of Axum and Meroe in Northeastern Africa. (2017, Jan 18). Retrieved from https://studymoose.com/development-of-axum-and-meroe-in-northeastern-africa-essay 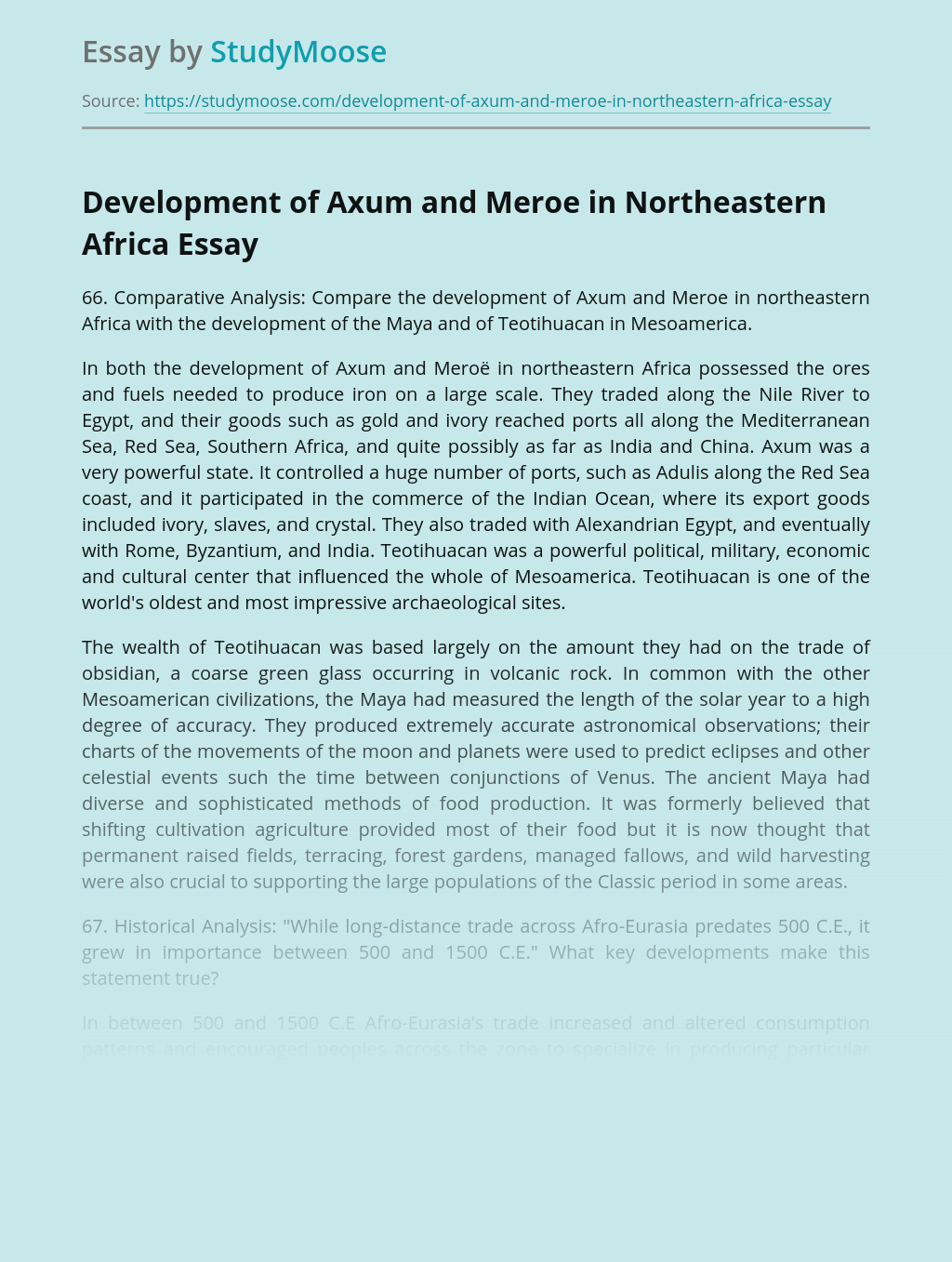 In May 2011, Pravin Shah, the CEO at Mahindra & Mahindra, was evaluating four possible options of company’s growth strategy in the South Africa. Those options included: entering into agreement with the local vendor for the contract assembly of M&M vehicles, investing in its own manufacturing plant in South Africa, using South Africa as a...

Colonialism occurs when one nation takes control of another. And that is exactly what happened when the British arrived in Africa. The people of Africa had no idea that the British was taking and had taken their land. But, with that being said the British are who had help develop Kenya by bringing them some...

View sample
Get Essay
Orientalism in Heart Of darkness

It is common to divide the world in the West and the East. This division has been used to differentiate two parts of the world that are inherently not alike either in cultural, social, political or economical aspects. However, historically, both regions of the world have been tied in one way or the other. Even...

View sample
"A Far Cry from Africa" by Derek Walcott