While the characters in the two short stories Destructors by Gramham Greene and The Lottery by Shirley Jackson had unexpected endings the characters varied in qualities, emotions, and motivation. Each story seems to reveal a surprising outcome and turn of events as their personalities unfolded. As the climax grew the outcome was not so predictable. In the Destructors the main characters were T (Trevor), the house, and Mr. Thomas (Old Misery). Trevor was the new recruit and was described as being very silent and reserved.

Turn in your highest-quality paper
Get a qualified writer to help you with
“ Destructors/the Lottery Compare and Contrast ”
Get high-quality paper
NEW! AI matching with writer

The author begins to paint a picture of how Trevor’s life used to be.

It stated that his father use to be an architect but is now a clerk as they have “come down in the world” (Greene). His mother had even viewed herself as being better than the neighbors. Trevor was very upset with the middle class and wanted to take his revenge and frustrations out on a nearby neighbor’s house, Old Misery’s.

Starved with envy he concocted a scheme to destroy the house not just by vandalizing the property but by literally destroying it from the inside out until there was nothing left. It seemed as though no one really new Trevor and would have envisioned what he was actually capable of.

The emotions, attitudes, and the behaviors of Trevor were intense as he was obsessed with destroying Old Misery’s house. His emotions seem to get out of control as Mr. Thomas ends up arriving home early and the rest of the Gang is ready to bail as the fear of getting caught presents itself.

“Trevor yells that it is not fair. ” This statement is very important as it now reflects and shows the drive and passion for destroying Old Myserys house. Blacke a fellow gang member agrees to stay and complete the tasks at hand.

I thought that Trevor was very selfish for his acts. It was not right to destroy someone’s home due to envy. Later in the story he shows his compassion as he locked the Mr. Thomas in the shed and gave him some food and a blanket so that he didn’t starve or get cold during the night while they completed the job. The motivation behind Trevor’s actions was that he was upset that his house and lifestyle had been destroyed. Statements early in the story like “Wren built that house father says” reflects that T was in deep though regarding Old Misery’s house.

At first the text didn’t reveal his thought and actions but as the story was told his actions were known. There are various events in the story that make you question his motivation as they find Old Misery’s money. Blacke asked Trevor was he going to steal and he says no that they were not thieves and end up burning it. It’s odd that you can view taking money as a thief but not find fault in destroying someone’s home. The fact that he even burned Old Misery’s money depicted this overwhelming need for Old Misery to experience the financial strain that he and his family was experiencing.

Unlike the Destructors who had only a few characters there were many characters that made a brief appearance in the story. The author really didn’t go into great detail regarding one individual but provides just enough to set the foundation of each character. The main characters of this short story were Tessie Hutchens and The Lottery. Tessie Hutchens played a major role as I felt she was the protagonist in the story. Tessie stands out from the beginning as she arrives late to the Lottery. The fact that she was doing house work and almost forgot what day it was shows that she had very little concern.

The emotions, attitudes, and the behaviors of that of the Lottery were very similar to that of the Destructors. The community carried out this horrible tradition without a second thought. Tessie was very selfish as she was willing to sacrifice her family to save herself. Everyone was well aware of the rules and regulations of this traditional event. Bill Hutchinson selected the slip of paper that would put his family in the drawing for the Lottery. But once Tess had won the Lottery she goes into a rampage and panics stating “You didn’t give him enough time to take any paper he wanted.

I saw you. It wasn’t fair! ” She demanded a recount and gave various excuses why they should start over. During her outrage and panic she goes as far as to suggest that her daughter and son in law should be included in the Hutchinson family. The proctor of this event states “Daughters draw with their husbands’ families, Tessie, and that “You know that as well as anyone else. ” It’s odd that she didn’t think enough of the Lottery to show up on time but now that she has won the Lottery it’s a different story. At first glance you couldn’t tell the motivation of Tess.

As it wasn’t clear as to what the Lottery was. At first the story had a sense of calmness by all involved It wasn’t until the end of the story that it was revealed what the lottery actually meant.. The fact that Tess was protesting the matter showed that it could not be a good thing. Her panic was created in the fear of her being stoned to death. She was also willing to break a tradition that had been conducted for over 76 years because she had won. As long as she didn’t win the lottery she had very little concern.

But in the end everyone around her was eager to carry out the tradition and get on with their day. The reasons of this tradition were never revealed but it was conveyed that this was something that was carried out every year without a second thought. Both of these stories carried very unbelievable and disturbing situations. In some ways they were alike and in others very different. In the destructors it was a bit concerning that a young boy could have so much anger towards a house and be mad because of his situation. As a result he then passed on that anger and resentment to a fellow neighbor.

The character Trevor seemed to not think about anyone else but himself. The story left me feeling sorry for Mr. Thomas as he now had no house and money. In the Lottery its questionable on how so many people could go along with such a horrible tradition and the lack that no one would even question the validly of it. It also showed that Tess was very selfish as she was willing to sacrifice anyone but herself. It makes you wonder how a mother could even fathom to put their child in their place for such a heinous act. In the end this reveals a scary side of human nature. 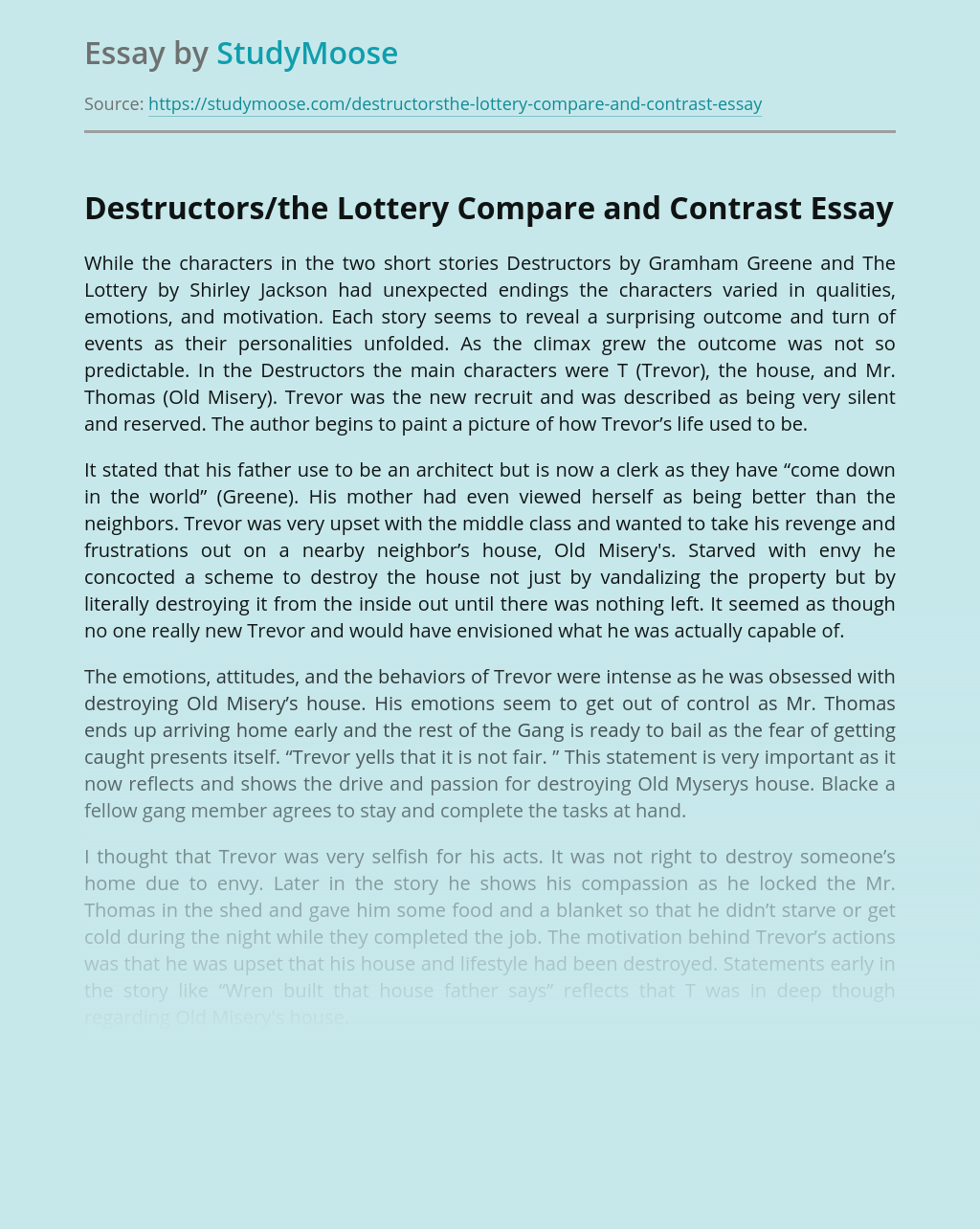 Turn in your highest-quality paper
Get a qualified writer to help you with
“ Destructors/the Lottery Compare and Contrast ”
Get high-quality paper
Helping students since 2015
Stay Safe, Stay Original